The Lost Days of Raúl Jiménez 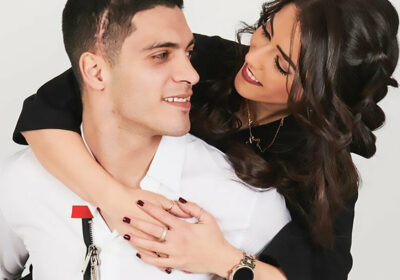 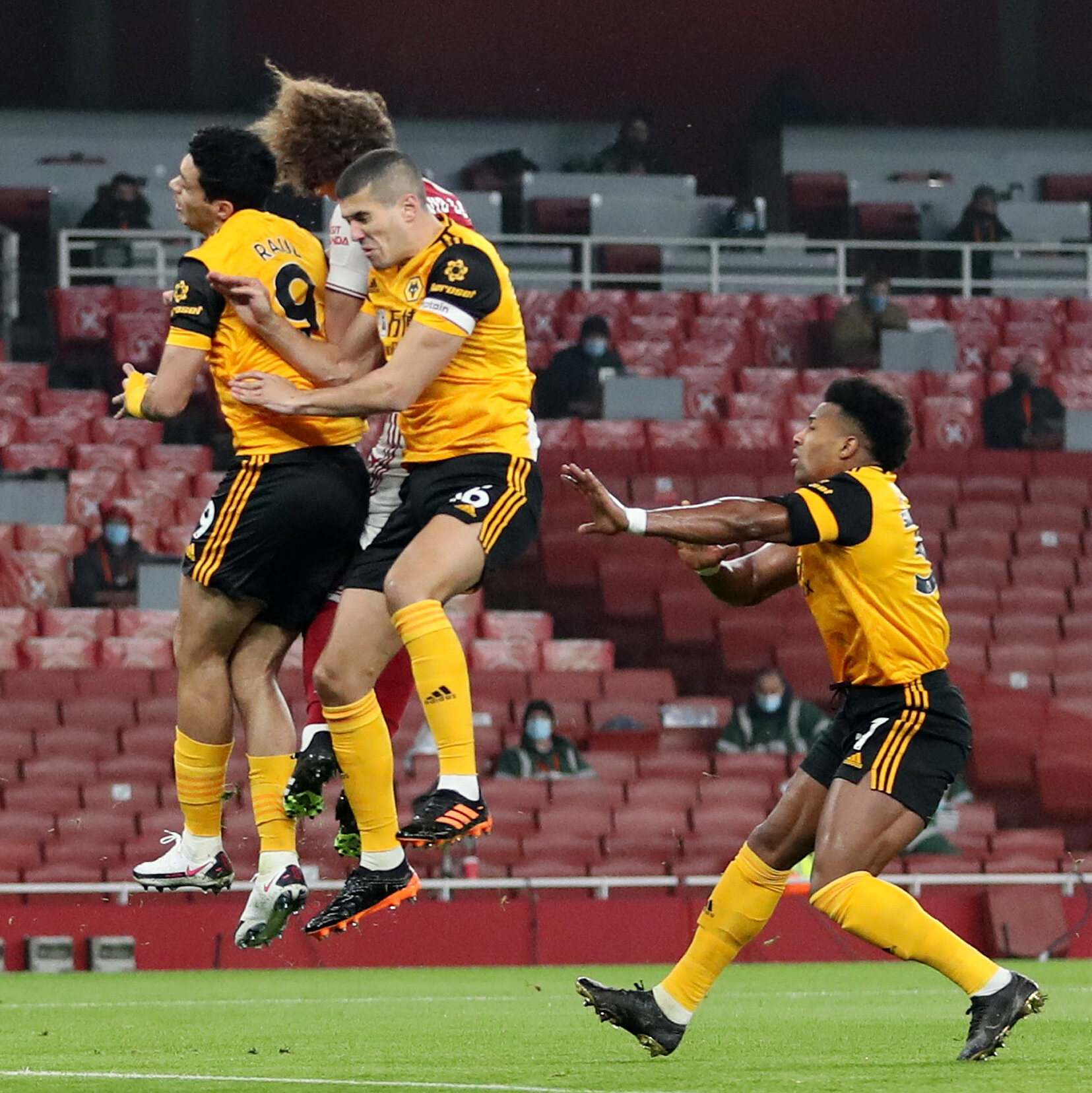 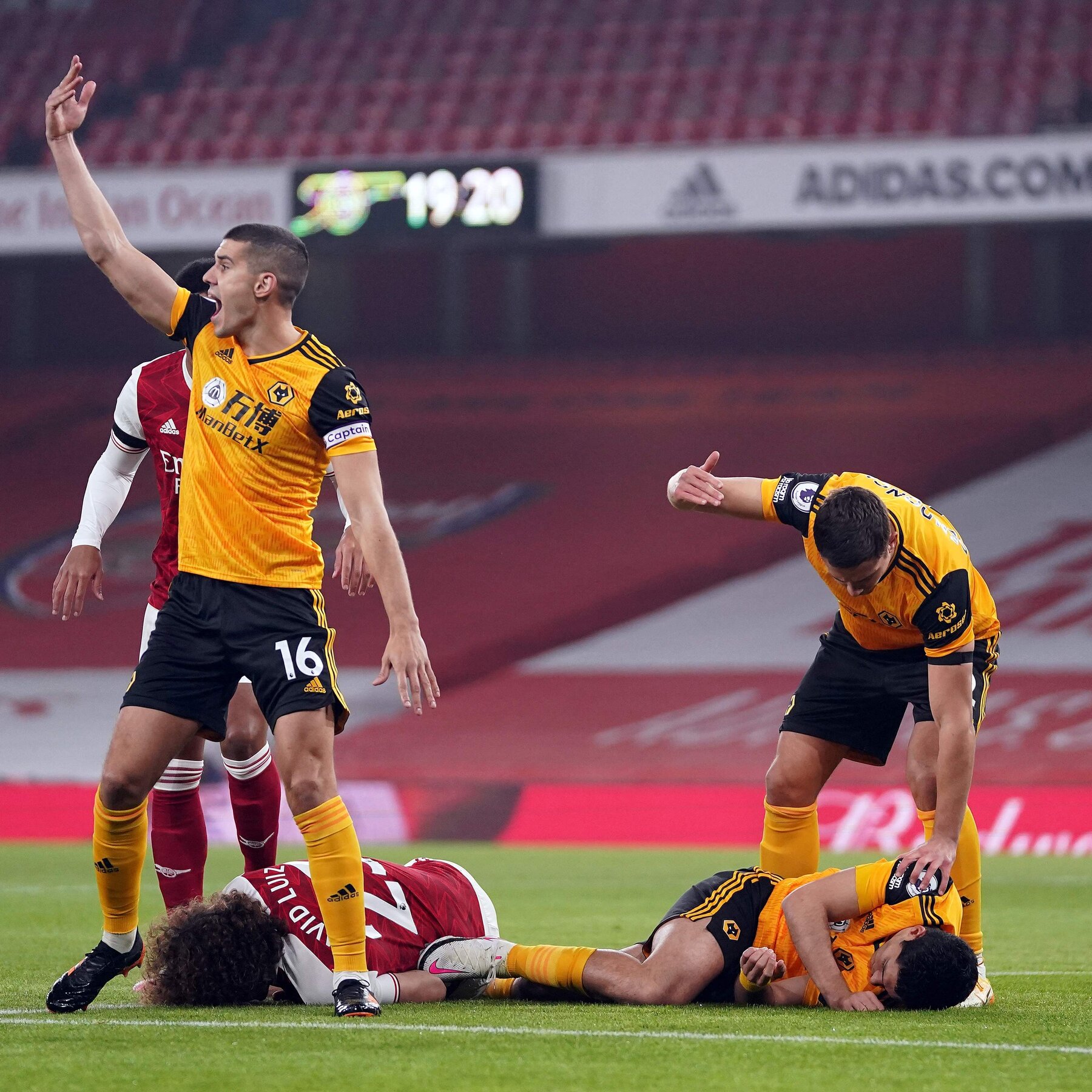 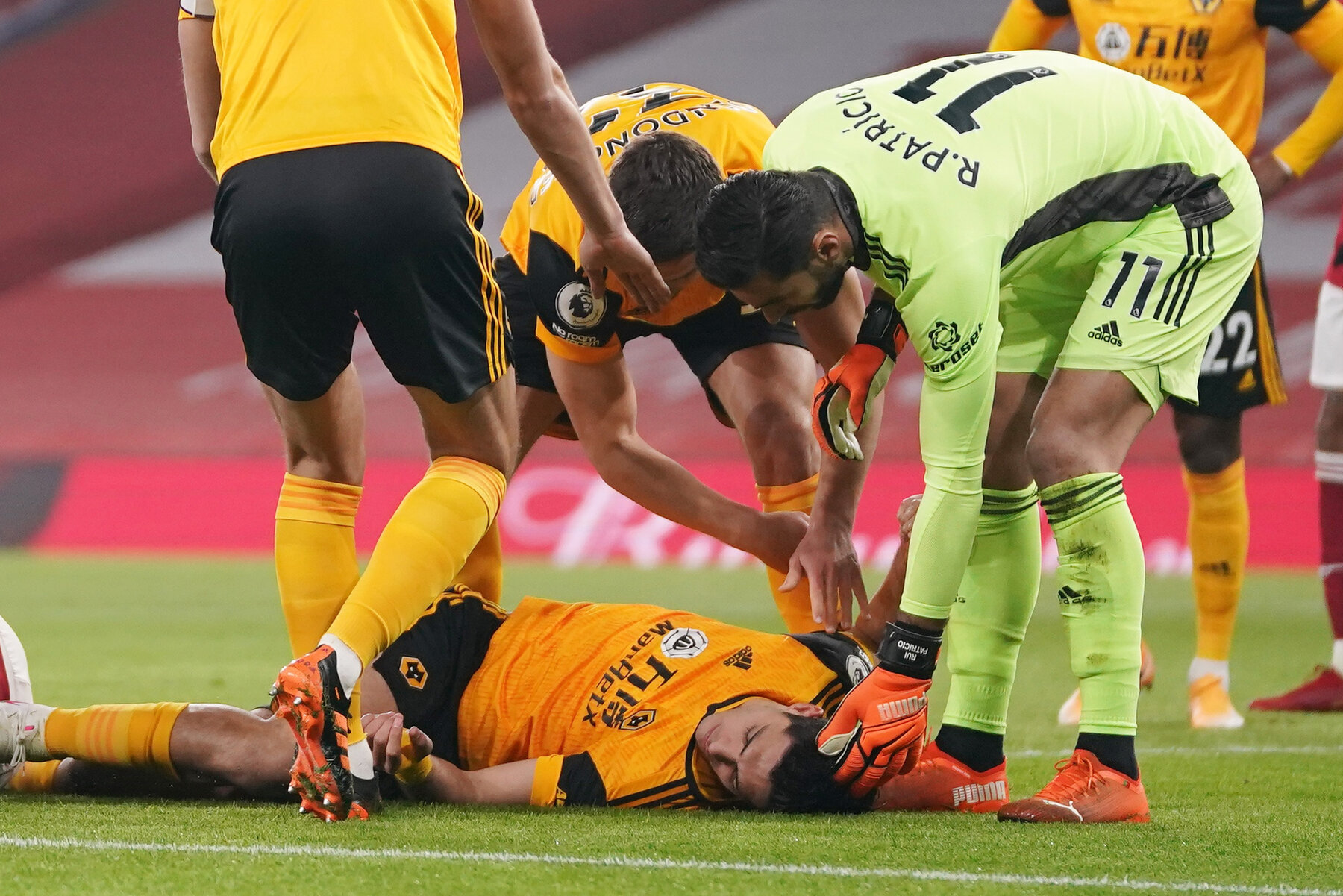 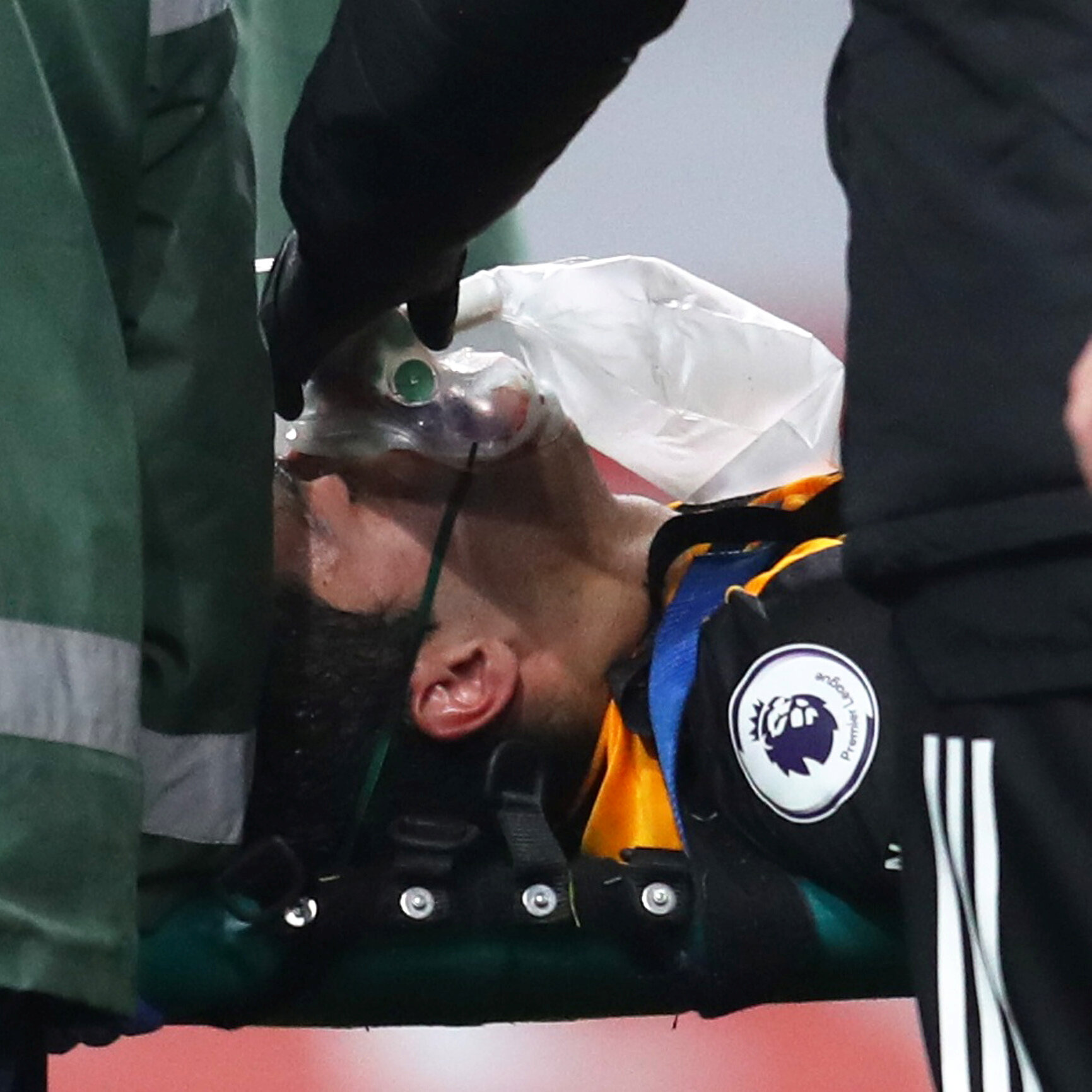 Raúl Jiménez does not remember rising for the header that nearly ended his career.

His partner, Daniela Basso, can never forget it.

Now she must cope with seeing him play again.

Raúl Jiménez remembers arriving in London with his Wolverhampton Wanderers teammates. He remembers walking onto the field at the Emirates Stadium an hour or so before that November game against Arsenal, briefly taking in his surroundings and heading back inside to get changed. He would, as usual, be leading the Wolves attack.

After that, everything is blank.

All he has of the five days that followed are snapshots, fuzzy and inchoate. He knows he was in the hospital. Nurses brought food to his bed and accompanied him to the bathroom. There were tests to check his balance. His girlfriend, Daniela Basso, spoke to him in video chats so he could see their 6-month-old daughter, Arya. Those are, he said, his días perdidos, his lost days.

Basso would be forgiven for craving the peace not of having forgotten but of never having known. She remembers every single minute with an aching, piercing clarity. She has to pick through the story carefully, as though she can process only a little of it at a time. Every so often, she glances at Jiménez, sitting beside her on a video call, as if to reassure herself that her darkest fears were not realized.

She was at home in Wolverhampton when Wolves’ game kicked off on Nov. 29. She had just finished bathing Arya. She was trying to settle her to sleep. The game was only a few minutes old when Arsenal won a corner kick.

Jiménez, a Mexican striker on defensive duty, glanced the ball clear as David Luiz, the Arsenal defender, raced in. Luiz’s forehead smashed into the side of Jiménez’s skull. The sound of the collision was loud enough to be heard through the television broadcast. Jiménez crumpled to the grass. 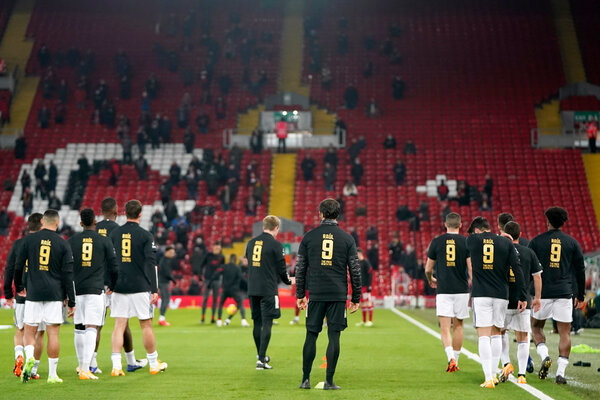 “In that moment, unfortunately, my first thought was that he had died,” Basso said. “Normally when players fall and get hurt, they react.” She can bring herself to smile at this point. “That is when you know if they’re faking or not. But that time: nothing. I couldn’t see anything. I couldn’t see his eyes.”

She grabbed her phone and called anyone she could think of: the medical team, which she could watch on television placing Jiménez into a breathing apparatus, gently placing him on a stretcher and rushing him to a hospital. She tried the club’s player liaison officer, then the physiotherapists. Eventually, she got through to the club secretary. All he could do was tell her he would let her know as soon as he had news.

“It was 45 minutes until I knew he was alive,” she said. “Not until I knew that he was well, or that he would be OK, just alive. Imagine 45 minutes where I had to try to keep myself calm and tell myself it would all be all right.”

Eventually, she got through to the club doctor. He alleviated her worst fears. Jiménez was on his way to a hospital. The relief, such as it was, was short-lived. The doctor told her Jiménez would be operated on immediately. She asked if she should go to London. He said yes. “That was the second shock,” she said. “The doctor knew I had a baby. When he said yes, I knew how serious it must be.”

The club sent a taxi to collect Basso and Arya and take them to London. The trip took almost three hours. She remembers that Arya would not sleep throughout the journey. But not once, Basso said, in that unfamiliar car in the middle of the night, did her 6-month-old cry. “Everything goes through your head,” she said.

The couple does not have family in Wolverhampton; their only support network, as Jimenéz put it, is their two dogs. Basso, an actress whose relationship with the striker has seen her relocate first to Portugal, then Spain and now England as his career has progressed, was the point of contact for everyone. “Our families and our friends in Mexico were bombarding me,” she said. “I had to be strong. I had to tell them it was going to be OK.”

By the time she and Arya arrived in London, Jiménez was in surgery. She waited. For two or three or more hours. The time blurred and warped. When the surgery on his fractured skull was finished, she was permitted to see him, but only for a couple of minutes. He was still sedated. “They told me it had gone well,” she said. “But because of Covid I couldn’t stay with him.” When Basso and her daughter arrived at a hotel, at 8 a.m. the next day, Arya finally went to sleep.

Jiménez stayed in the hospital for a week, though he remembers little of that, too. His contact with Basso and Arya, because of restrictions in place because of the coronavirus pandemic, was through video calls. “Nobody could see him,” Basso said. “We spoke to him just to let him know we were near. So he knew he was not alone.” The sight of him walking, unaccompanied, out of the hospital the next Friday was, she said, “the best thing, just to have him with us.”

For Jiménez, the next few weeks passed slowly. His doctors warned him to take it easy. It might take a while, they said, for his balance to come back. He tired quickly, and admits now that he had “a couple of siestas a day.” There were visits to the hospital for scans, to check for any swelling in the brain and to make sure the fracture in his skull was healing. Apart from that, all he could do was wait.

Basso, on the other hand, was struck by the speed of it. “It was hard that first week, but the week after, it was impressive,” she said. “I would have taken five months to recuperate, but he seemed to get better quicker.” She wonders if the fact that he is an athlete helped accelerate his recovery.

Not quite three weeks after surgery, Jiménez returned to the team’s training facility, just to feel the turf beneath his feet again, to reconnect with his teammates. Within a month, he was taking his first steps toward playing again: first in the gym, working on his mobility, his coordination, his balance.

A few weeks later, he was back on the field, first to run and then, by early March, to train. When he will play again is not certain — the 30-year-old Jiménez had hoped to be able to return this season or for international commitments with Mexico this summer, but there is no definitive timetable — but simply feeling like a soccer player again feels like a major triumph to him.

His involvement is governed by strict rules. He has been told not to head the ball, at least not yet. It is one of the strengths of his game, one of the things he loves about playing. When that is eventually permitted, he will start with a softer, smaller ball, to help his skull build resistance. There are benefits, though. “They told my teammates to be careful with me,” he said. “It is weird for them, and weird for me. I get the ball, and nobody can touch me. It’s like being Messi.”

What he never doubted, not for a second, was that he wanted to come back. Basso never saw him deflated or infuriated, even in those difficult first days. More than once, she said, she told him he should cry if he felt like it. He told her there was no need because he knew he would play again.

“I never thought that I didn’t want to go back,” he said. “It is what I have done for as long as I can remember. It is the thing that brings me most happiness. Playing again was my motivation. I wanted Arya to see me play, and that is the best motivation I can have. I was always confident. If the skull heals well, if the brain is completely recovered, I can play again.”

For Basso, it is more complex.

Her priority, of course, is that her partner “is here with us, and he is OK, whether he plays again or not.” But she still struggles with the memories of what she saw and what she felt, the “horrible” moments when it all comes rushing back. She has to remind herself that Jiménez is at home, that the surgery was successful, that his doctors are confident there was no lasting damage to his brain. “When I think about it, I see that he is here, and it settles me,” she said.

She has had to wrestle, too, with the worry of what it would mean to see him out on the field once more, in a game where there are no rules telling opponents to go easy on him, to avoid contact, where he would not only be allowed to head the ball — albeit, most likely, with some sort of protective cap — but actively encouraged to do so.

The conclusion she has reached, though, is that she trusts the doctors overseeing his recovery, and she trusts Jiménez. She has taken strength from his absolute conviction that he will return. “If he decides to play, then he has to go with everything, to go without fear,” she said. “The moment you have fear is the moment that accidents happen. If you decide you can’t do it, it is fine to say you can’t. But don’t do it for fear. Whatever his decision, here I am.”

She has thought, too, about whether she will ever be able to do what she did that evening last November: idly sit down to watch him play, free of worry, not fearing the worst. She has always enjoyed watching his games, and she worries now that she will “have my heart in my hands” every time he takes the field, the echoes of what she heard and the flashbacks of what she saw never dimming.

But if and when he does return, she will, she thinks, watch. Jiménez misses plenty of things about soccer. “The journey from the hotel to the stadium, the feeling of going out on the field to play,” he said. Most of all, what he misses is “scoring a goal, the most beautiful feeling, the satisfaction of doing your job, of helping your team.”

The next time he does it — and Basso, like Jiménez, is confident there will be a next time — she will be watching. “I trust him,” she said. “I will watch the games, and I will enjoy the goals. And my daughter will enjoy watching her dad score a goal.”