Home » The coaching carousel in men’s basketball is spinning quickly.

The coaching carousel in men’s basketball is spinning quickly. 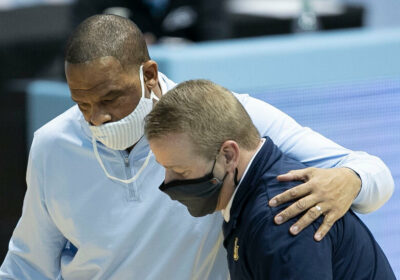 When Roy Williams retired last week after 33 seasons as the head coach at North Carolina, there was widespread speculation about who would fill the shoes of a man who won three N.C.A.A. championships at one of the top programs in the country.

That speculation ended Monday, hours before the national championship game, when the school named Hubert Davis, 50, as Williams’s successor. Davis, who helped lead the Tar Heels to the 1991 Final Four and most recently served as Williams’s associate head coach, becomes the first Black head coach in the program’s history.

Davis was set to be formally introduced during a news conference Tuesday afternoon.

“I am honored and humbled to be given the opportunity to lead this program,’‘ Davis said in a statement.

“I love this University. I played here, I earned my degree here, I fell in love with my wife here, I got married here, I moved here after I retired from the N.B.A. and I have raised my family here,” he added. “I am proud to lead this team, and I can’t wait for all that comes next.”

Several teams in the Big 12 have also been busy on the coaching carousel. Oklahoma on Friday named former Loyola-Chicago coach Porter Moser as the successor to Lon Krueger, who retired at 68. Krueger was one of just three coaches (along with Tubby Smith and Rick Pitino) to lead five universities to the N.C.A.A. tournament. Moser, 52, went 188-140 (.573) in 10 seasons at Loyola and led the Ramblers on a surprise run to the Final Four in 2018, with an assist from Sister Jean Dolores Schmidt, and then a round of 16 appearance this season.

The Moser news came on the same day Kansas signed Bill Self to a lifetime contract and one day after Texas hired Chris Beard away from Big 12 rival Texas Tech.

Self won a championship in 2008, but Kansas has recently been under N.C.A.A. scrutiny in the wake of the federal government’s investigation into corruption in college basketball. Self’s contract contains a clause that the university will not fire him for cause “due to any infractions matter that involves conduct that occurred on or prior to the date of full execution of this agreement.”

Beard led Texas Tech to the 2019 championship game, where the Red Raiders lost to Virginia. He began his career as a graduate assistant at Texas.

Texas Tech has had several players enter the transfer portal, and it’s possible some of them could follow Beard to Texas.

In the Big East, Marquette replaced the fired Steve Wojciechowski with Shaka Smart, who grew up in Madison, Wis., and has ties to the area. In six seasons at Texas, Smart failed to win an N.C.A.A. tournament game, and this year the No. 3-seeded Longhorns were stunned in the first round by No. 14 seed Abilene Christian.