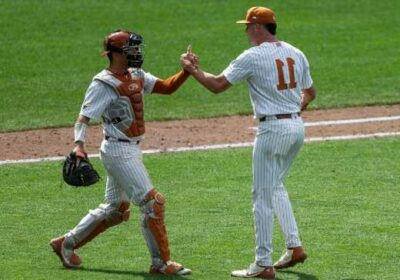 Witt (5-0) allowed only three singles, walked none and struck out two in his longest outing of the season. He pitched three 1-2-3 innings, and no Tennessee runners made it past first base after the fourth inning.

Peyton Manning — the Tennessee sports star whose “Omaha!” yell at the line of scrimmage remains his calling card five years after he retired from football — watched from the stands in his orange polo and white ballcap.

The Volunteers gave him something to cheer when Jordan Beck’s two-run single put them ahead in the second inning. The lead was short-lived. Eric Kennedy’s three-run homer off the back wall of the right-field bullpen put Texas up 3-2 in the bottom half.

Ardoin’s single into right center broke a 4-4 tie in Texas’ three-run fourth, and the Longhorns were up 8-4 when Kennedy scored on a wild pitch in the sixth.

Sean Hunley (7-5), who relieved Tennessee starter Blade Tidwell in the fourth, took the loss after allowing three runs in two-thirds of an inning.

Both teams argued balls and strikes from their dugouts, and Tennessee volunteer assistant Ross Kivett was ejected when Hunley walked Douglas Hodo III on four pitches in the bottom of the fourth.

Kivett pounded his fist on the rail of the first-base dugout, causing the papers in his binder to go flying, and third-base umpire Mike Morris jogged in to throw out Kivett.

Texas: Plays on Thursday against the winner of Tuesday night’s Mississippi State-Virginia game.