Texas A&M hangs on with an overtime buzzer beater. 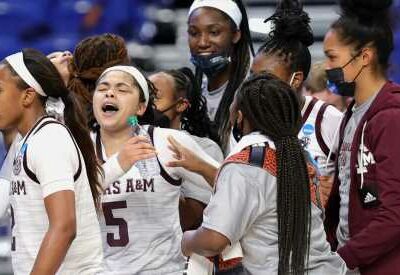 Jordan Nixon saved Texas A&M from being the highest seed knocked out of the tournament so far with a layup at the buzzer in overtime that gave the Aggies an 84-82 win over Iowa State.

Seventh-seeded Iowa State held the lead for most of the game and ended the third quarter with a 9-point advantage. But the second-seeded Aggies — who were pushed hard in their first-round win over 15th-seeded Troy — were not going down without a fight.

A jumper by Nixon coupled with a layup by center Ciera Johnson with a minute on the clock in regulation brought the Aggies to within a point of the Cyclones. Ashley Joens, who finished with 32 points and 18 rebounds for Iowa State, clapped back with a turnaround jumper.

Nixon then made a driving layup to send the game to overtime, and started overtime with a 3-pointer that gave the Aggies a lead for the first time. The teams continued to volley until the end and were tied with a second to go, when Nixon broke away for her layup at the buzzer. She finished with 35 points.

The Alamodome erupted in the loudest applause of the tournament, and the Aggies breathed a sigh of relief. Texas A&M will play in its third consecutive Sweet 16.

In a postgame interview, Nixon dedicated her performance to her high school coach, Dave Edwards, who died on March 24, 2020, after contracting the coronavirus.

“Today was for him,” she said.