Australian cricket captain Meg Lanning has encouraged sporting bodies to invest resources, time and energy into female tournaments and competitions after a world record crowd of 91,553 for a women’s sporting event attended a soccer match at Camp Nou in Barcelona this week.

Just days away from leading Australia into the ODI World Cup final against England in Christchurch, Lanning joined those urging football fans to show up in numbers for Saturday’s historic AFLW preliminary final between Melbourne and the Brisbane Lions at the MCG.

It will be the first time an AFLW match has been staged at the ’G with industry sources suggesting a crowd of 10,000-15,000 would be a success. 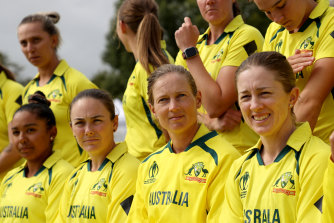 Lanning, who played in the Women’s T20 World Cup final at the MCG that attracted 86,174 spectators to the MCG two years ago, said the MCG final and the world record crowd in Spain showed the appetite for women’s sport.

“If organisations and tournaments take a bit of a risk and put a lot of resources and time and energy into creating those opportunities there are fans and supporters who want to come and see women’s sport and enjoy the event,” Lanning said.

“Hopefully, it’s a sign for more organisations and tournaments to take that leap and give female sport the opportunity to continue to grow.”

Lanning, who continues to lead The Age’s AFLW tipping while making runs in New Zealand, said the AFLW final at the MCG should be exciting as perennial contenders Melbourne play defending premiers Brisbane.

“It’s top class sport, and it is a contest, and from an Australian perspective, we love contests and close games and two teams battling it out and that is exactly what you will get at the AFLW final,” Lanning said.

She said the AFL and those involved must keep pushing forward without being afraid of potential setbacks.

“You have got to be ambitious and be willing to fail in a way because you’re not sure how it is going to pan out. If you don’t give it a chance then you never will find out,” Lanning said.

Prominent football figures believe playing the preliminary final at the MCG will be seen as a turning point for the women’s game.

At Camp Nou on Wednesday night, Melbourne time, Barcelona beat bitter rivals Real Madrid 5-2 to reach the Champions League semi-finals in front of a crowd that surpassed both the previous club mark of 60,739 in 2019 at Atletico Madrid’s Metropolitano stadium, and the official attendance record for a women’s game. 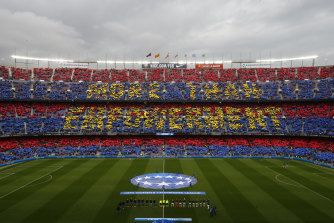 Supporters hold up banners reading “more than empowerment” in Barcelona.Credit:AP

That was set at the 1999 World Cup final between the United States and China, when 90,195 fans were in attendance at the Rose Bowl in Pasadena.

AFLW premiership coach Bec Goddard, who will take the reins when Hawthorn enters the competition, said the turnout showed what was possible and made a powerful statement about gender equality.

“I get goosebumps talking about it [the record crowd]. We saw how many people turned up for the cricket [T20] world cup final,” said Goddard, referring to the crowd of 86,174 that saw Lanning’s Australians defeat India in March 2020. “It’s not like there’s no appetite, you’ve just got to create the opportunity.” 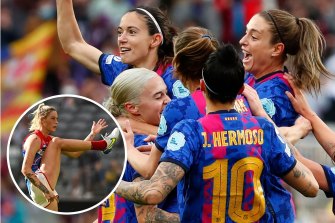 She said AFLW expansion, the likely move to start the season in August and playing in bigger stadiums were steps towards equality.

“It’s an opportunity for our women to feel valued and to show there are no gender barriers to playing on the big stage. What a statement a big game at a big venue makes,” she said, urging football fans of all stripes to show up.

“They’ll see a great show; the big names of women’s football doing their thing, and it will be incredible to watch.”

The record attendance for an AFLW match is the 53,034 who turned up at Adelaide Oval for the 2019 grand final. Saturday’s Demons-Lions preliminary final will be played at 12.40pm, with the Collingwood-Geelong men’s match at the same venue that night. Adelaide will host Fremantle at Adelaide Oval in the other prelim at 2.10pm Adelaide time, and entry for both matches is free.

Melbourne chief executive Gary Pert said playing at the MCG was a sign of things to come. “It is an early example of what should and could happen with AFLW that we end up playing a lot of our home games as either before or after the AFL games as double headers at the MCG,” he said.

“If we work towards that it will be a real turning point for the AFLW competition.″⁣

The AFL was forced to rejig the finals fixture when a match was postponed because of COVID-19, and two Melbourne teams would have enticed a bigger crowd, but Pert said a “strong and passionate crowd” was expected.

The Melbourne Cricket Club will open the members’ reserve (members will be able to bring four guests) and gate six of the Shane Warne Stand.

“This is a really important stepping stone not only for Melbourne’s AFLW team but the sport,” Pert said.

“Playing at the MCG is going to bring the best out of our players and the game as a spectacle … to be playing on a bigger ground and on the MCG is exciting and hopefully a sign of things to come.

“The game just needs to be exposed to more supporters and then they will fall in love with the game. The game has evolved to the point now where the AFL is really keen to showcase it.”

At the Champions League game in Barcelona there was an enormous mosaic in the stands with the slogan “more than empowerment”.

The club had run a huge marketing campaign and all 99,354 tickets for the match had been sold out since January. Hopes of breaking the record were doused by rain and the match started with the stadium only half full, but the crowd built steadily during the match and almost filled the iconic Camp Nou, Europe’s largest stadium.