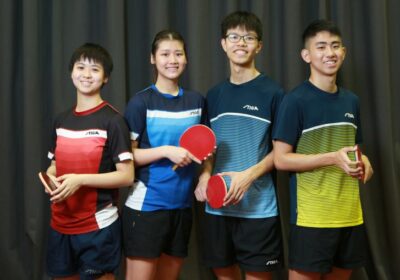 SINGAPORE – A young group of paddlers aged 25 and under will represent Singapore in the Sept 28-Oct 5 Asian Table Tennis Championships in Doha, Qatar.

To prepare for life after the eventual retirement of world No. 10 Feng Tianwei and 32nd-ranked Yu Mengyu – both of whom are in their 30s – the Singapore Table Tennis Association has made the bold move to field younger and inexperienced players for the women’s team event.

Though ranked 850th, Zhou has shown potential as a youth player as she reached world No. 5 in the girls’ Under-15 rankings.

While a dip in standards is expected with a new line-up, their cause has been helped by the pullouts of defending champions China and North Korea, who finished fifth in 2019.

National women’s coach Hao Anlin said: “As we enter a new Olympic cycle, we want to give our younger players the opportunity to test and prove themselves on the international stage.

“Our aim is to provide them exposure and experience so that we have continuity to stay competitive among the best teams. I want our players to treasure every match they play and keep improving.”

Prior to the Asian Championships, which features singles, doubles and team events, the national table tennis players had tasted action at a WTT Star Contender tournament at the same venue.

An excited Zhou said: “It is really an eye opener for me as it is my first time coming to such a big competition.

“I met many table tennis stars which has inspired me to train and work even harder to become like them. My coaches and teammates are all very supportive and encouraging towards me, thus the transition from the youth to senior scene has been quite smooth.

“I aim to play to the best of my abilities, learn more from the seniors and gain valuable experience.”

Meanwhile, the men’s team will be led by former Under-18 world No. 1 and SEA Games men’s singles champion Koen Pang (160th) and Clarence Chew, who in July became Singapore’s first local-born male paddler to play at the Olympics in Tokyo. The other team members are Josh Chua, Beh Kun Ting and Lucas Tan.

Chew, a 25-year-old veteran of three Asian Championships in 2011, 2013 and 2015, said: “I’m looking forward to competing at this event again and hope to have a similar mindset as how I performed at the Olympics and put on a good performance.

“I hope to do my part in guiding and supporting the younger players especially in doubles and team events, and more importantly helping the team to qualify for the world team championships next year.”

To do so, the men’s team will have to finish in the top 10 in Doha, but national men’s coach Gao Ning has set them a target of at least maintaining their eighth position from 2019, and wants them to “play without fear of the outcome”.