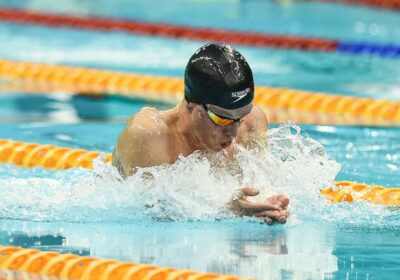 The 22-year-old Stubblety-Cook earned a berth at his maiden Olympics with an electric swim at the Australian trials in Adelaide, tracking under world record pace until the final few metres to touch in two minutes and 6.28seconds.

It was a new Commonwealth record and only a fraction outside the all-time best 2min 6.12sec that Russia’s Anton Chupkov posted to win the 2019 world championship.

The man Chupkov beat to that title, Australia’s Matt Wilson, was second in 2:08.57, but narrowly outside the tough qualifying standard, leaving him in tears.

Wilson, himself a former world record holder, led through 100m, but Stubblety-Cook made up time underwater at the turns before pulling clear in the final 50m.

“I’m just ecstatic,” he said. “I went into tonight just looking to execute a process and I swam well.

“I was pretty happy with where my 100 was at and knew that my forte was the back end. Matt going out pretty fast was helpful in the end.

“It’ll be great to race someone like Chupkov at the Olympics because we race quite similar.”

Apart from Stubblety-Cook, only Chupkov and Japan’s Shoma Sato have dipped under 2:07 this year and will be key rivals, as will Kazakhstan’s defending Olympic champion Dmitriy Balandin.

In an upset, neither Stubblety-Cook nor Wilson qualified for the 100m breaststroke earlier in the week.

Chalmers, who stunned the swimming world when he claimed gold in Rio as an 18-year-old, stormed to the third fastest time this year, hitting the wall in 47.59sec as he steps up preparations for an expected showdown in Japan with American superstar Caeleb Dressel.

While Chalmers outpaced Dressel in Rio, he was pipped to the 2019 world title by the American.

“A lot of pressure on that one. I was relieved after qualifying in the 200, but to get my main race and swim just 0.1 slower than was in Rio is pretty good. It was my first 47 in a while,” said Chalmers.

“It’s exciting,” he added of defending an Olympic title.

Elsewhere, Maddie Gough smashed the Australian record by six seconds in the 1,500m freestyle, touching in 15:46.13, second only to American great Katie Ledecky this year in an event that will make its Olympic debut.

“So happy,” said Gough, who will be at her first Games.

“I knew I’d done a lot of good training but it’s amazing to swim such a good race.”

Brianna Throssell qualified for her second Olympics by winning the 200m butterfly in 2:07.63 ahead of 17-year-old Elizabeth Dekkers who agonisingly touched just outside the qualifying standard.

“I’ll take that time, I would really have liked to go 2:06 but it was a qualifying time and that’s all I can ask for at the moment,” said Throssell, who is still some way off China’s Zhang Yufei who leads the pace this year with 2:05.44.

Rio Olympic 200m butterfly silver medallist Maddie Groves did not race, sensationally pulling out before the trials began after complaining about “misogynistic perverts” in the sport.