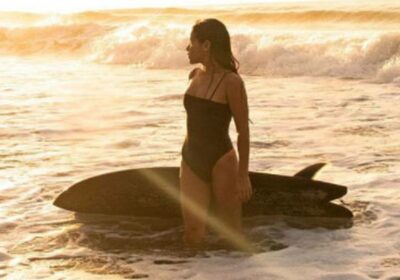 Fresh details have emerged surrounding the death of 22-year-old surfing star Katherine Diaz, who was killed instantly when she was struck by lightning at a beach in El Salvador.

A funeral was held for the popular wave-rider over the weekend, where her family and friends placed flowers by her coffin and the surfboard she was holding when the lightning strike hit.

Her uncle, Beto Diaz, was with her at the beach in El Tunco when she died.

He revealed she had just returned home from Mexico and after catching an early flight had decided to make the most of the extra hours by heading out for a surf.

Beto Diaz said his niece had spotted a friend as she walked onto the sand and went over to greet her.

“Katherine came over to hug her, as soon as she finished hugging her, the noise was heard,” Beto said. “The friend was thrown by the force of the lightning strike too … Katherine passed away instantly.”

Katherine’s sister Erika spoke at her funeral. “We are very close,” she said.

“Katherine was a girl full of energy, with a free spirit who made each day feel worthwhile. Unfortunately she left us. She died doing what she liked the most, on her favourite wave.”

A paddle out, where surfers form a circle while sitting on their boards out in the ocean, has been planned to make Diaz’s death.

Diaz, who worked as a chef, was training for a global competition set to be held in El Salvador that is serving as the last qualifying event before surfing’s debut at the Olympics this year.

She had recently named La Bocana at El Tunco Beach as her favourite wave.

“I just found out about the death of Salvadoran surfer Katherine Díaz,” said Yamil Bukele, president of the Salvadoran Sports Institute. “I am very sorry for this death and I join the pain that overwhelms her family. Our solidarity with ‘el Bamba’ and the surf family. Peace for your soul.”

Her brother, Bamba Diaz, has posted several tributes in the wake of her death.

“Sister we will always carry you in our hearts,” he wrote. “God decided to take you now. We already miss you. Love forever.”