‘Such a disgrace’: Sickening footage emerges at Euro 2020 final 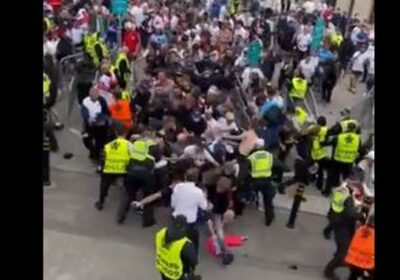 A child was trampled and a man kicked while lying on the floor at Wembley Stadium after fans without tickets forced their way into the stadium for the European Championship final.

Mind-boggling moments were filmed and posted on social media which showed England fans pushing past police, security and stewards to try to witness the historic match against Italy.

Some of the men kicked and pushed staff as they forced their way into the stadium to watch England’s first major final in 50 years.

“Can only describe scenes outside Wembley as carnage and not in a good way. First line of security clearly breached,” UK Daily Mail reporter Mike Keegan tweeted.

“This is utterly appalling. Can’t – and shouldn’t – be forgotten, whatever the result,” Sky News journalist Martha Kelner said while sharing a video of the assault on social media.

“Come on Metropolitan Police, this is beyond a joke now. There are kids and families being frightened, the time of their lives is being ruined. Get a grip because it’s going to escalate. Stewards have got no chance,” Daily Mail football correspondent Dominic King said.

While some fans shown in the videos appeared to get past the fences and towards the venue, Wembley officials insisted there had been no breach of stadium security.

A spokesman for Wembley Stadium said: “We are dealing with an incident that occurred at the outer security perimeter area of the stadium, with support from police.

“Safety measures were quickly activated in the relevant areas and there were no security breaches of people without tickets getting inside the stadium.”

The Metropolitan Police tweeted: “We supported the security teams at Wembley Stadium a short time ago with this incident.

“Wembley security officials have confirmed there was no security breaches of people without tickets getting inside the stadium.”

London Police and Mayor Sadiq Khan urged fans not to travel to Wembley without match tickets, with the force noting officers were “on hand engaging with crowds and to keep people safe”.

More sickening footage continued to emerge of the shocking scenes.

In response to the clip above, British TV presenter Caroline Pearce tweeted: “Absolute thugs. Such a disgrace.”

The mood outside Wembley was growing febrile well before kick-off as thousands of fans gathered on Olympic Way.

Some drunken fans were throwing beer cans and bottles as well as traffic cones, with red flares and fireworks set off.

Social distancing was ignored as maskless supporters congregated in large groups on the concrete approach to the stadium.

England has been gripped by Euro fever since Gareth Southgate’s side booked the country’s first major final appearance for 55 years.

The Three Lions are aiming to win a first trophy since the 1966 World Cup. With coronavirus restrictions still in place, the final capacity at Wembley has been limited to 67,500, with around 7500 seats reserved for Italy fans.