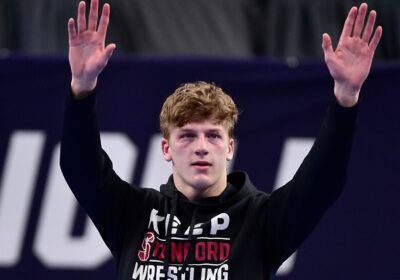 Athletes at Stanford filed a pair of lawsuits against the university on Wednesday in a last-ditch effort to force it to reinstate most of the 11 sports it is axing at the end of the current school year.

One suit, filed by eight athletes, is claiming fraud and breach of contract, arguing that Stanford did not disclose to recruits that it was formulating plans to drop the sports, which, the suit said, had been in the works for years. The other suit is asking for an injunction on behalf of five women, arguing that dropping their sports would violate Title IX laws.

The suits, which were filed in United States District Court in San Jose, Calif., are similar to those filed by athletes at Brown University, which agreed to reinstate five of the 11 sports it had planned last year to eliminate.

Stanford officials did not immediately respond to a message seeking comment on Wednesday night.

More than 30 universities, including Clemson and Central Michigan, have eliminated sports teams during the coronavirus pandemic, according to the Business of College Sports website. But no university has cut more teams, or drawn more attention, than Stanford, which is declining to dip into its endowment, which was about $29 billion as of March, to finance one of the N.C.A.A.’s most successful broad-based athletic programs.

When Stanford wrestlers competed in the N.C.A.A. championships in March, they wrestled in black singlets without the university logo as a form of protest. After the sophomore Shane Griffith won the 165-pound national championship, he wore a “Keep Stanford Wrestling” hoodie.

Still, despite the broad range and considerable influence of the athletes’ support, Stanford has not budged on its decision — even after Marc Tessier-Lavigne, the university president, met in April with leaders from 36 Sports Strong, the alumni group that is trying to compel the school not to cut the 11 sports. The group raised pledges of $40 million to help endow the teams on the chopping block.

“Eight million for Stanford is what they find under the cushions in the president’s office,” Jeffrey Kessler said, referring to the yearly savings the university would realize from eliminating the 11 sports. Kessler, a lawyer, said athletes he represents were duped into attending Stanford without knowing the university would drop their sports.

Among them was Lydia Koo, a freshman fencer who was recruited by Brown, Cornell, Duke, Northwestern and Notre Dame. The suit contends that Stanford committed fraud by devising plans to drop the sports as long as four years ago and purposefully keeping their deliberations secret until less than an hour before the announcement, fearing there would be an exodus of coaches and athletes, and that recruits like Koo would not have attended Stanford had the university been more transparent.

Kessler said Stanford should have formed a committee with input from athletes and alumni.

“You go through an open process, and then there’s no problems,” said Kessler, who represented Brown athletes in a suit filed in September and who recently argued against restrictions on college athletes’ income before the Supreme Court. “There’s an illegal way and a right way.”

The other suit claims that Stanford is discriminating against female athletes by dropping five women’s teams and one majority female team, coed sailing — a similar argument made by Brown athletes.

Rebecca Peterson-Fisher, a lawyer who is representing women in each of those five sports, said cutting the sports would push Stanford further out of compliance with Title IX, the federal statute that requires universities to provide athletic opportunities for women that are in proportion with the gender makeup of the student body. She said Stanford double counts 14 women’s sailors who are also members of the coed sailing team.

“We think it’s a violation of Title IX to cut the teams,” Peterson-Fisher said.

Both suits are asking the court for an injunction that would prevent Stanford from dropping the sports until all current athletes who arrived since last July 8, the date of the announcement, had completed their eligibility.