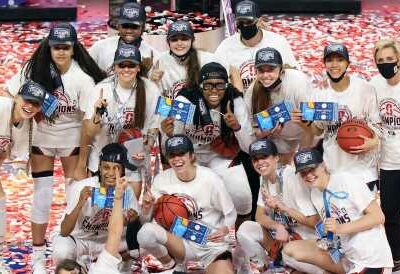 In some ways, Selection Monday looked the same as it always has. Teams anticipated their places in the N.C.A.A. women’s basketball tournament bracket from conference rooms and arenas around the country, their anxiety and celebrations shared with ESPN’s audience.

Over a year into the coronavirus pandemic, though, it was hard to watch without being reminded of a giant Zoom call to commemorate a milestone from a distance. And making this year’s 64-team N.C.A.A. tournament field is a huge milestone, even for programs that typically would be shocked not to have been selected.

When Stanford was announced as the No. 1 seed over all, the players’ cheers on the court expressed what their smiles, hidden behind masks, could not. The Cardinal, who were led by the senior guard Kiana Williams, knew what it was like not to have the chance to compete in the tournament, which was canceled last year.

The Cardinal clinched the Pac-12 tournament championship for the first time since 2014 with a 20-point win over U.C.L.A. on March 7 after just two losses during the regular season, including nine weeks of practice and play in Las Vegas.

Santa Clara County, Calif., which encompasses the Stanford campus, started restricting sports participation late last year because of the coronavirus, so the Cardinal made their home base at U.N.L.V.’s arena, the Thomas & Mack Center, until those restrictions were lifted.

Still, they managed to develop one of their most competitive teams in years.

In December, Stanford’s Tara VanDerveer became the coach with the most victories ever in Division I women’s college basketball, surpassing the late Pat Summitt of Tennessee with her 1,099th win. Now VanDerveer and the Cardinal are in a strong position to compete for their third N.C.A.A. title and their first since 1992.

The rest of the No. 1 seeds were UConn, South Carolina and North Carolina State.

There were plenty of surprises among the 33 at-large selections and 31 automatic bids for the tournament that begins with the round of 64 on Sunday.

Hours before the field was revealed, UConn announced that its coach, Geno Auriemma, had tested positive for the coronavirus and would not immediately travel with the rest of his team to Texas, where the tournament is being staged.

“I’m feeling well but disappointed that I will be away from the team for the next several days,” said Auriemma, who has won 11 national championships with the Huskies.

Because all the games were being staged in one state rather than sprawled across sites around the country, the bracket looked like a smoother ranking of the teams, 1-64, than it would in another year in which geographical considerations would be given more weight. The four regions that split up the bracket were named after San Antonio landmarks: Alamo, Hemisfair, Mercado and River Walk.

The toughest region might be topped by No. 1 UConn and No. 2 Baylor. Placing the defending champion, Baylor, and a perpetual favorite, UConn, in the same region is a nifty way for the selection committee to potentially continue what has, over the past decade, become something of a rivalry. As it stands now, each team has beaten the other four times. Also in the region, No. 3 seed Tennessee and No. 4 seed Kentucky are both battle tested thanks to their slog through the Southeastern Conference, where both churned out nine wins that spotlighted their respective stars Rennia Davis and Rhyne Howard. 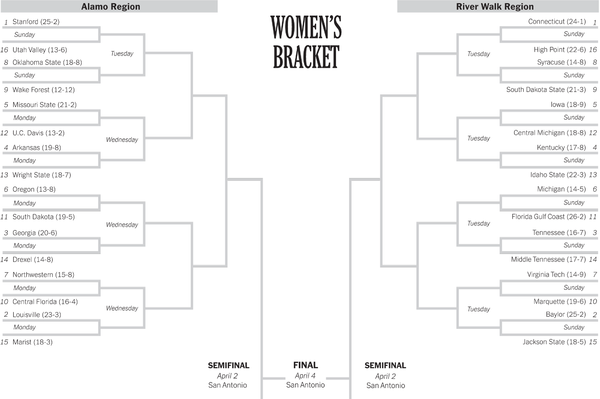 Some of the seeding tracked with the changes in the metrics used by the N.C.A.A. selection committee to assess teams. The committee used the N.C.A.A.’s composite NET ranking on the women’s side for the first time this year as one of the 14 criteria that determine teams’ eligibility and seeding. Although the metric was intended to provide some transparency, it also gave some fans more fuel for grievances. Rutgers fans, for example, might wonder how a team ranked No. 12 overall according to NET wound up as a No. 6 seed.

The lower seeds also show some of the limits of even the most advanced analytics. High Point, Bradley and Stony Brook are all slated to compete in the Division I tournament for the first time, as is Utah Valley, which was selected in place of California Baptist to represent the Western Athletic Conference. California Baptist went undefeated and won the WAC tournament title, but is only in its third year competing at the Division I level and not yet eligible.

Wyoming, which won its first Mountain West title last week while becoming the first No. 7 seeded team to win that conference’s tournament, made the field for just the second time in the program’s history, thanks in large part to a defense that rebounds 74 percent of its opponents’ misses, according to Her Hoop Stats. Wyoming earned a No. 14 seed. Virginia Commonwealth University, a No. 13 seed, also earned its second tournament bid thanks to a title run in the Atlantic 10 Conference tournament, which it won for the first time despite beginning play as a No. 5 seed.

After spending plenty of time on the bubble, Wake Forest earned a No. 9 seed. Brigham Young University earned a No. 11 seed, even after losing the West Coast Conference championship game, 43-42 to Gonzaga.

Four key teams were left out of the field: Houston, DePaul, Notre Dame and Oklahoma. Notre Dame, playing its first season following the retirement of longtime coach Muffet McGraw, missed the tournament for the first time since 1995. DePaul was included in the N.C.A.A.’s first reveal of the top 16 teams in February, but lost three of its last four regular season games.

Still, one or more of those teams might wind up competing if the virus forces one of the current 64 teams out of the field by the Tuesday night 6 p.m. Eastern deadline set by the N.C.A.A. During the tournament, any team without at least five available players because of contact tracing or positive tests will be automatically disqualified and their opponent will advance to the next round.

The hope, of course, is that it won’t come to that, and players and staff can finally show off their hard-won skills on the sport’s biggest stage.

“With all the protocols, we’re going into an area that’s never been occupied before — as are the other 63 teams,” Auriemma said soon after his team won the Big East tournament but before his positive test. “I have no idea what’s going to happen. I usually have a pretty good idea what’s coming up in the N.C.A.A. tournament, but this year is unlike any other year.”