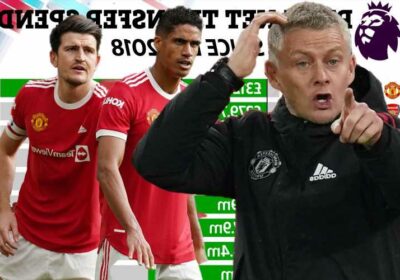 MANCHESTER UNITED have spent more on transfers than any other Premier League club since hiring Ole Gunnar Solskjaer.

The Norwegian chief, 48, is rumoured to be on the brink of the sack following Sunday's 5-0 embarrassment at home to Liverpool.

United are now without a win in their last four Prem games – losing three of those – and have slipped to seventh in the table, eight points adrift of leaders Chelsea.

Steve Bruce was the most-recent top-flight boss to be sacked.

But at least the former Newcastle chief can blame a lack of investment in his squad.

Solskjaer won't have that luxury if he's given the boot.

After all, United have the highest net spend on transfers since he succeeded Jose Mourinho in December 2018.

In fact, Solskjaer has commissioned FOUR £50million-plus signings since arriving.

United have made some money on players sales since Solskjaer arrived, including £73m on Romelu Lukaku in 2019 and Daniel James for an initial £25m earlier this summer.

Despite that, United have comfortably the highest net spend in the Premier League – a staggering £312.1m.

In terms of the their league title rivals, Manchester City have a net spend of £199.6m.

Chelsea, arguably the favourites for this season's crown, boast a net transfer spend of just £82.1m.

And then there's Liverpool – the team who trounced United 5-0 on Sunday – and another very likely to win the league this season.

Jurgen Klopp's Reds have a net PROFIT of £3.6m thanks to their shrewd work in the transfer market since Solskjaer's arrival.

And in that time, of course, Liverpool won the Premier League title, in 2019-20.