Home » Sports world reacts to Derek Chauvin verdict: Guilty on all counts in the murder of George Floyd

Sports world reacts to Derek Chauvin verdict: Guilty on all counts in the murder of George Floyd 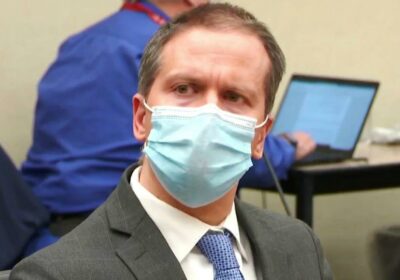 The high-profile case of Derek Chauvin has come to an end after three weeks of trial.

Floyd, a 46-year-old Black man, was seen on video being pinned to the ground by police, gasping for his life underneath the knee of Chauvin for more than nine minutes.

As Floyd pleaded that he could not breathe, the world watched in anguish.

Floyd's death  ignited protests for social justice and appeals for reform, the world continues to react.

GEORGE FLOYD: Sports world came together in united front as we held our breath for Derek Chauvin verdict

From the major sports leagues to individual athletes, here is what the world of sports is saying after the verdict was reached:

“George Floyd’s murder was a flash point for how we look at race and justice in our country, and we are pleased that justice appears to have been served.  But we also recognize that there is much work to be done and the National Basketball Association and the National Basketball Players Association, together with our newly-formed Social Justice Coalition, will redouble our efforts to advocate for meaningful change in the areas of criminal justice and policing.”

The NBA and WNBA teams in Minnesota shared the same sentiment.

"One year ago, George Floyd was murdered, causing unimaginable pain and trauma for his family, the Minneapolis community, and communities across the nation.

To our BIPOC community, the Timberwolves and Lynx remain committed to influencing change, promoting impactful action, and using our platform to help heal and unite in pursuit of liberty and justice FOR ALL."

The following was released by the NBA. pic.twitter.com/taSKKJa2Sc

The Atlanta Hawks released the following:

"Today, inside a courthouse in Minneapolis, our nation saw legal justice served. While this verdict can never fully bring solace to the loved ones of George Floyd, it is a start in their healing and that of the entire Black community that continues to grieve his loss and countless others at the hands of senseless brutality. Last summer, the Hawks made a commitment to stand against racism and injustice and to continue denouncing the broken systems that contributed to this moment. We remain committed to being a part of the solution and using our platform to move us toward a more accepting, anti-racist society."

More Than A Vote — the voting rights organization comprised of Black athletes and artists — posted the following:

A verdict won’t bring back all the Black lives lost too soon.

We need more than a verdict.

We need Black lives to matter before they're gone."

We need more than a verdict.
We need Black lives to matter before they’re gone. pic.twitter.com/CcxJw30pBn

Thank God…guilty! Justice has been served!!

“This past year, we have witnessed traumatizing instances of police brutality that Black Americans disproportionately experience, with the murder of George Floyd at the forefront of the conversation.  While this verdict represents a step toward justice, we are reminded that justice is too often not the outcome for people of color.  The WNBA/WNBPA Social Justice Council will continue its work to combat injustice and inequality in our country and hope this represents a true turning point for how the effects of systemic racism begin to be addressed.  We stand with all those who have felt the deep impact of George Floyd’s death.”

In a league statement, MLS said:

"Major League Soccer is united in unequivocally condemning violence, discrimination, and hate in all of its destructive forms and stands in solidarity with George Floyd’s family, friends, the Black community, and its allies. While today’s verdict cannot cure the indescribable pain of a human life violently taken, it honors the sanctity of George Floyd’s life and reaffirms that a Black life matters. MLS, its clubs, the MLSPA, and its players will continue to take actions to advance equality, peace, and healing. Justice for one must not overshadow the cry for equal justice for all."

"You don't need a jury trial to watch the video and know that George Floyd was murdered."

Minnesota's NHL team said, "while the verdict marks the end of the trial, there is still much work to me done," in a team statement.

"Today's outcome in the Derek Chauvin trial in Minneapolis does not undo the loss of life. Mr. George Floyd should be here with us today," the NFL said in a statement on Twitter. "Our hearts remain with the Floyd Family, and we understand the pain, anger and frustration does not go away even when justice is delivered."

At the bottom of the sixth inning of the Dodgers-Mariners game, the Dodgers took to Twitter to send condolences to the Floyd Family.

"Today our thoughts, prayers, & condolences remain with George Floyd’s family, & others that have recently been devastated by violence. The Dodgers will continue to support and encourage awareness and commit resources in the effort to address systemic inequity & social injustice."

Today our thoughts, prayers, & condolences remain with George Floyd’s family, & others that have recently been devastated by violence. The Dodgers will continue to support and encourage awareness and commit resources in the effort to address systemic inequity & social injustice.

“This is the only just outcome, Wilbon said. "I am relieved. I’m not hopeful yet. There are too many people who have been murdered since George Floyd in similar ways. … I’m not in a celebratory way yet. I’ve seen too much of this my entire life. I’ve seen 60 years of it.”