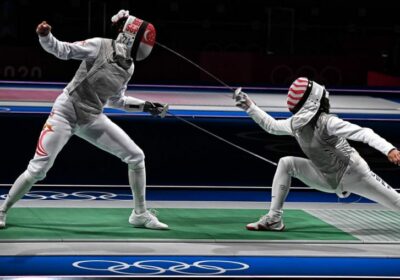 TOKYO – On a single Olympic day you can be many things. You can be defeated and inspired, disappointed and motivated, educated and regretful. You can feel it’s gone too fast and know you want to come back again.

In a Tokyo hall where the squeaking shoes and clinking foil blades echoed in the emptiness, Singapore fencer and first-time Olympian Amita Berthier had that kind of complicated day on Sunday (July 25). She faced a three-time Olympic veteran. Gamely tried an aggressive tactic yet was “frustrated with (her) execution”. And then praised her victor who has been her hero.

Berthier, world No. 60, fought America’s Lee Kiefer, world No. 5, and the difference between debutante and elite athlete showed. The Singaporean lost 4-15, hugged her rival and took home something intangible but valuable. Experience.

“I’m like really inspired,” she said of the Olympics, “to be around so many great athletes and just always trying to learn more to better myself.”

Berthier, 20, and Kiefer, 27 come from the same university, Notre Dame, are tutored by the same coach, Amgad Khazbak, and have sparred multiple times. Berthier has even attended Kiefer’s wedding, but today respect was put aside and competitiveness was embraced.

Still, familiarity was at work here and on this day Kiefer took better advantage of it. “I wouldn’t say I’m extremely satisfied with my fencing,” said Berthier. “It was a tricky bout because Lee and I are teammates back in the US, so we know each other very well. In practice, you know, sometimes it can be really close.

“So my goal today was just to go on the strip and give my best and fence my hardest. I feel like I fenced my hardest, I’m just unhappy that I didn’t get to hit some of the touches that I was planning. But on the other hand, she’s an amazing athlete, an amazing fencer and so I’m not super disappointed in my loss. I just wish that the bout could have been longer.”

Berthier won the first point, fell behind 1-3, made it 2-3, but then Kiefer won eight points in a row. The Singaporean was always pushing forward, trying to take the initiative, but everything was unspooling very rapidly on the piste.

The Olympics are over for Berthier and yet not her education. She will not fence but she plans to watch. Like many athletes, even in defeat, she tried to squeeze positives out of this day.

“I really look up to Lee and hopefully I’ll reach her level.”

One day, she said. But not today.