EVERTON were given a major reality check as they crashed to their first defeat of the season – but still kept hold of top spot in the Premier League.

Carlo Ancelotti’s side have been talked about as serious contenders this season but they were given a real going over by Southampton, who made it three wins from their last four. 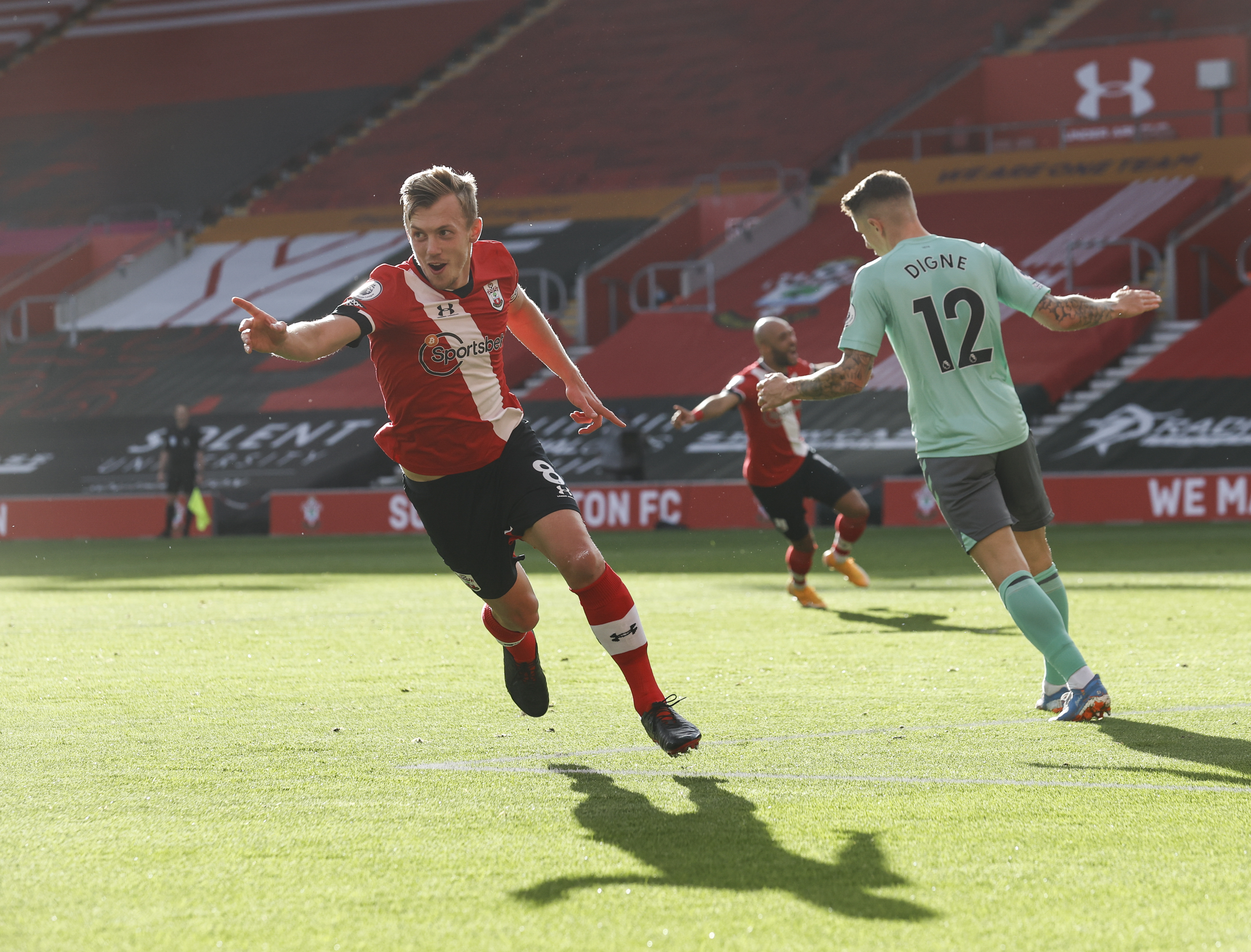 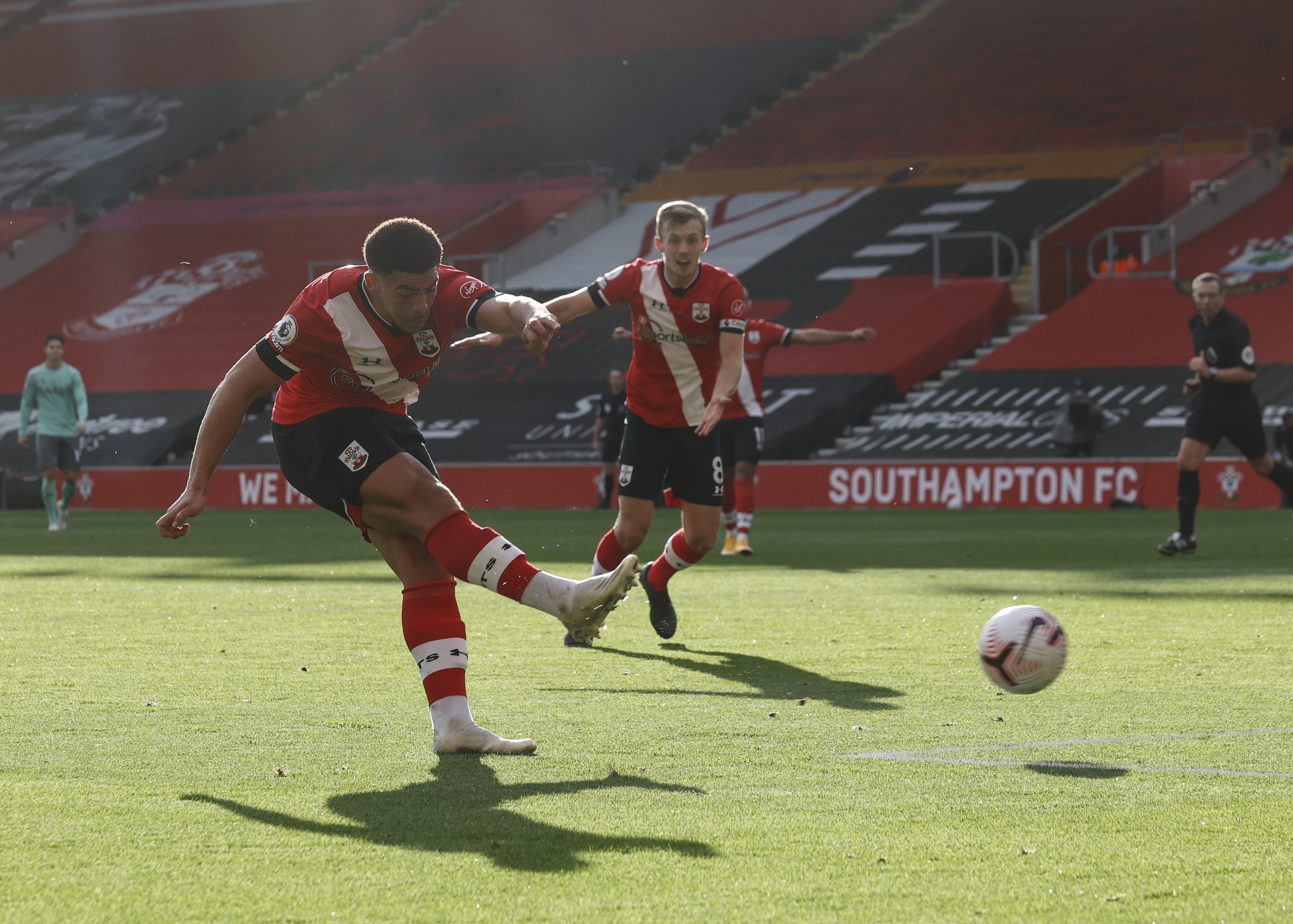 It was a dismal day for the Toffees as they also saw Lucas Digne shown a red card, but they maintained their place at the top of the table at least for another week.

But suddenly the over-excited claims of being more than a match for anyone sound completely fanciful on the evidence of this display.

So much has been said and written about Everton as title contenders this season, the expectation had been among many that they would just turn up and roll Saints over.

With James Rodriguez overcoming the injury suffered in the draw with Liverpool, the leaders had their playmaker out there along with their main man Dominic Calvert-Lewin.

But instead of going out and showing their supposed top four credentials, the men from Merseyside were outplayed and outfought throughout a torrid game.

Southampton were rampant in the opening period as instead of being troubled by the attacking qualities of James, they exposed his defensive weaknesses.

The Colombian isn’t one for putting a shift in up and down the right, unlike the suspended Richarlison.

And the south coast side made the most of it with Ryan Bertrand and Nathan Redmond causing untold problems for the exposed Ben Godfrey. 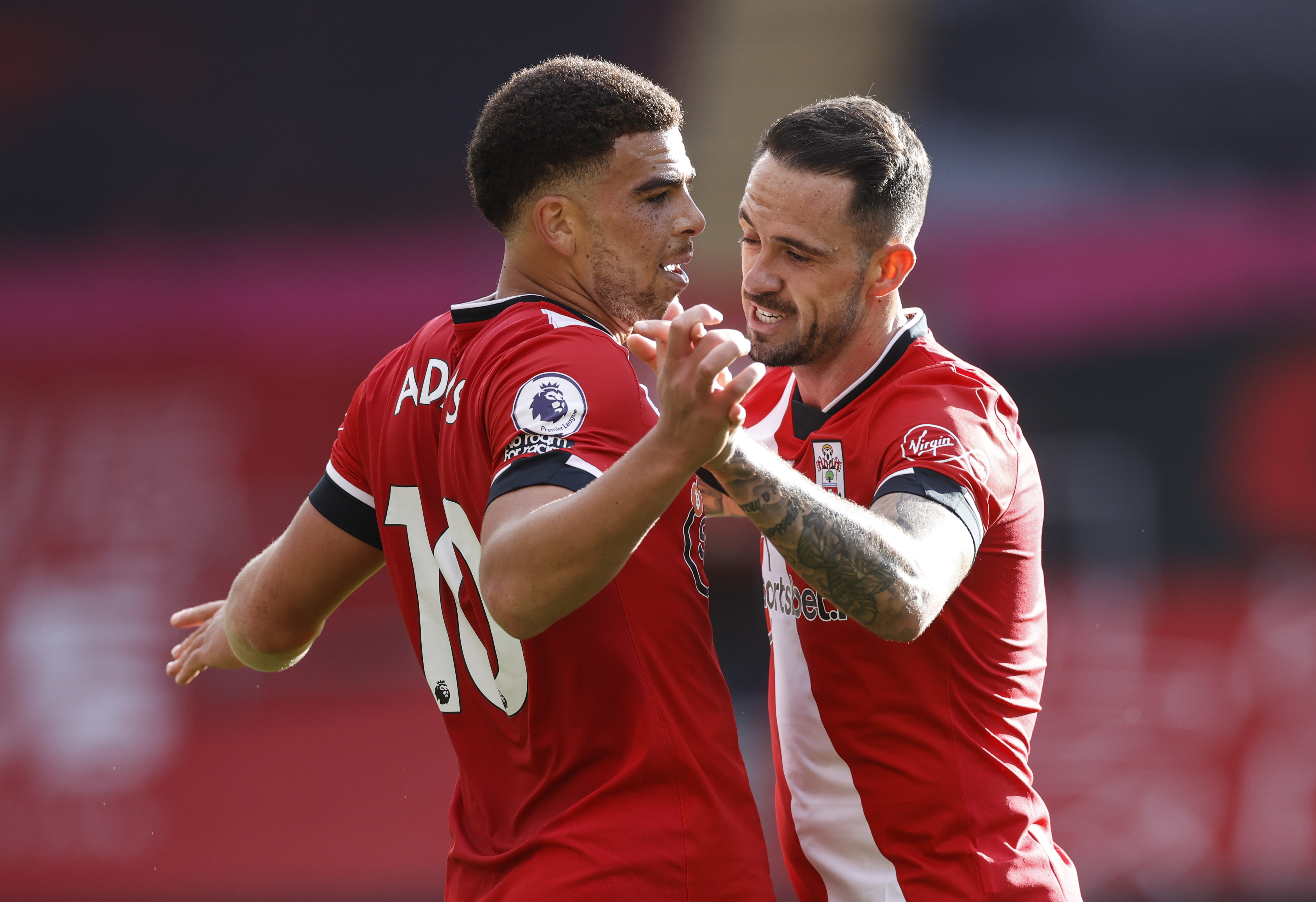 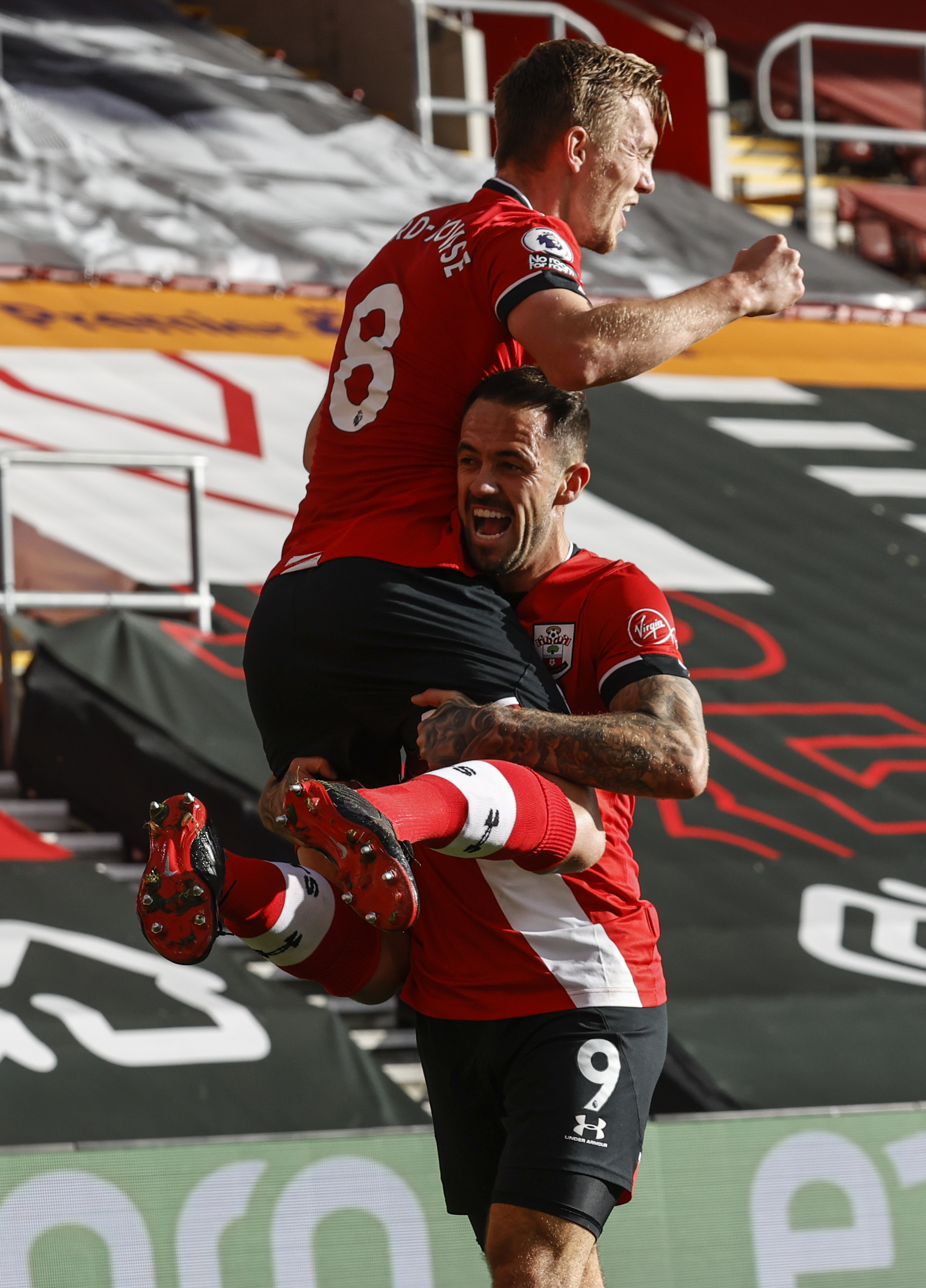 Making his first start since his £25million move from Norwich as a makeshift right-back, Godfrey was getting a real going over as Saints time and again attacked down the left.

Ralph Hasenhuttl’s side should really have opened the scoring on 12 minutes when Danny Ings ventured out left to beat Godfrey and pick Redmond out with a low cross – but the winger scuffed his shot across the face of goal.

There was a five minute period when Ancelotti’s side started to impose themselves on the game as Alex Iwobi saw an effort deflect wide before James fired a 25-yard free-kick at Alex McCarthy.

Gylfi Sigurddson was then left cursing his luck on 19 minutes when he watch his fierce drive from the edge of the box dip over McCarthy, only to skim the top of the crossbar.

Instead of building from that, Ancelotti watched in frustration as his team went into their shell and Saints took complete control.

The warning signs were there when Oriel Romeu stung the fingertips of Jordan Pickford with a blistering 30-yard shot on 26 minites.

Within 60 seconds, Saints were ahead.

James Ward-Prowse collected the ball out wide on the right and surged forward before exchanging a one-two with Ings, driving in behind Digne and shooting into the bottom corner.

Ten minutes before the break the home side doubled their lead, this time getting the reward for their continued efforts down the left.

Che Adams collected on halfway, then released Ings to attack the exposed Godfrey, rounding the defender and Yerry Mina before crossing to the far post. 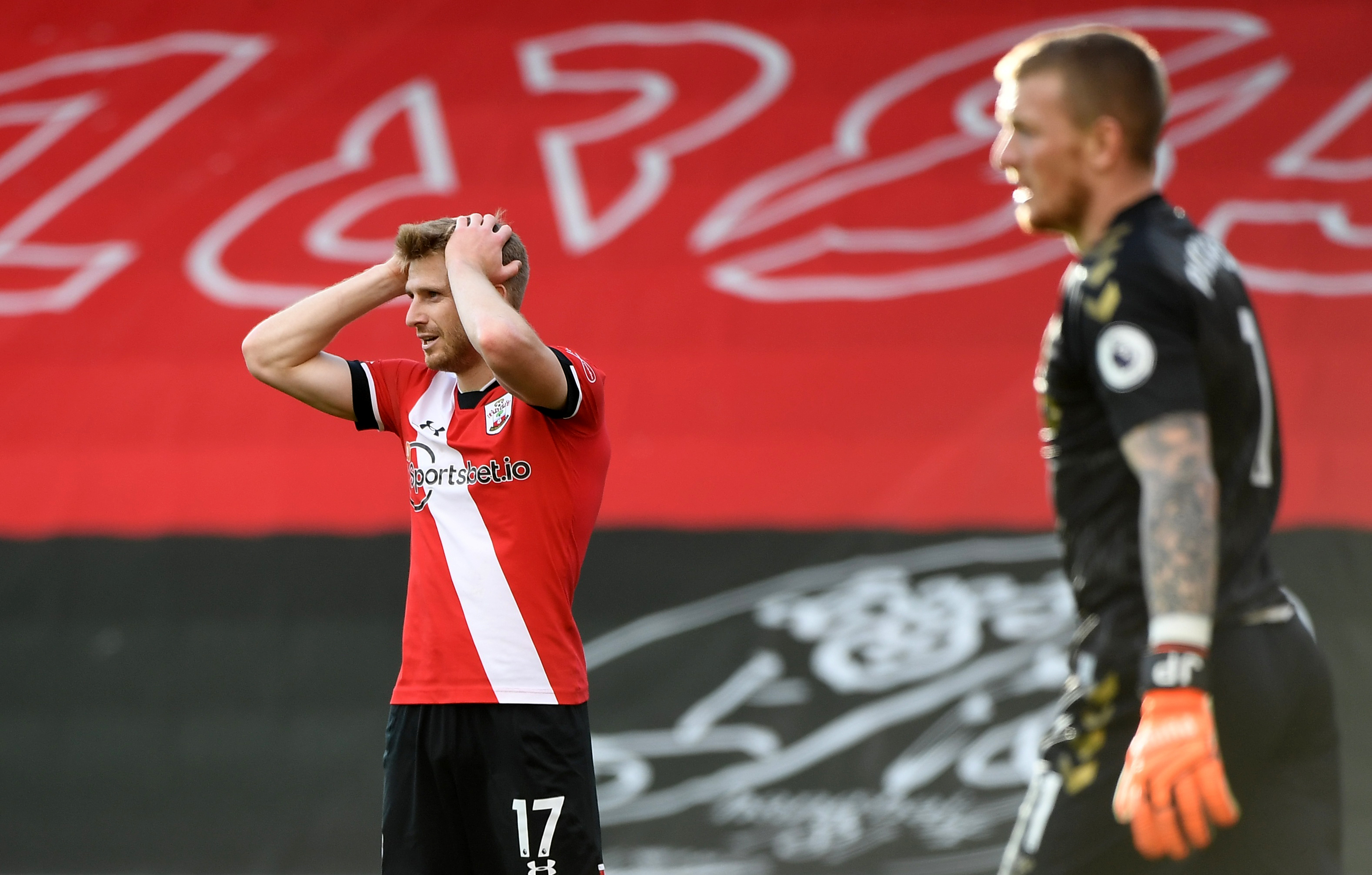 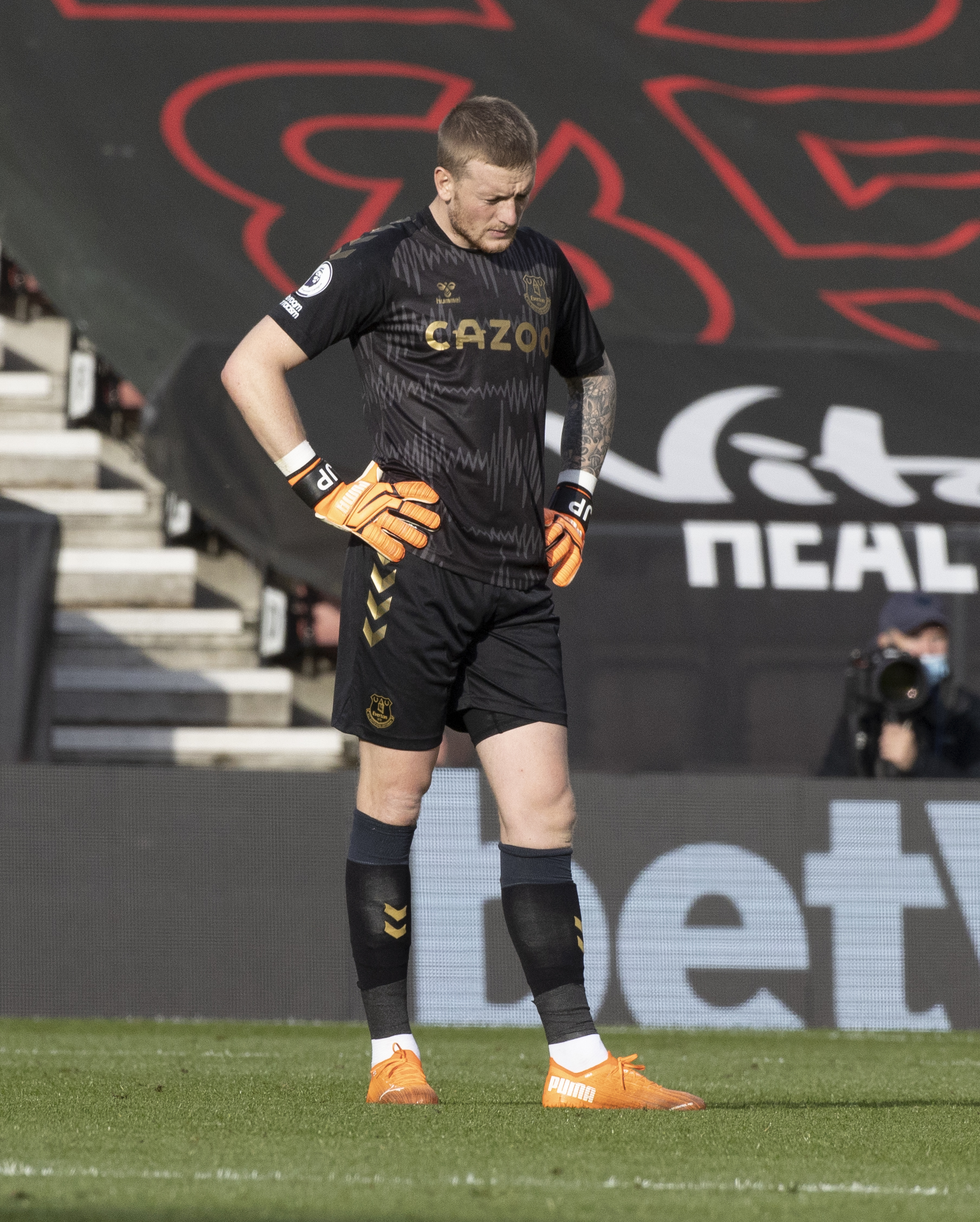 Adams had made up the ground to control and then dispatch a low shot past Pickford for a deserved second.

It could have been three before half-time when Adams broke free on the right and rolled the ball back into the path of Stuart Amrstrong to finish with an excellent shot.

But the assistant referee then decided to raise his flag, penalising Adams on half-way as the goal was ruled out.

There was still enough time for Iwobi to completely mis-control wide out on the left, and the reaction of Ancelotti said it all.

The Italian cursed the mistake, spoke angrily to his bench – and when half-time came, Iwobi was hooked in place of Brazilian Bernard.

It could have been anyone, in truth, and within a minute of the second half starting Godfrey was again caught out as Adams ran in behind him, but the striker’s effort was tame and Pickford was able to save.

It was easy to forget the most in-form striker in the Premier League was on the pitch, because Dominic Calvert-Lewin was anonymous – starved of any possession or opportunity to cause problems.

Not that Saints cared a bit as they continued to pile forward looking for a third, and the home side felt they should have won a penalty seven minutes after the break when Bertrand cut into the area on the left.

Godfrey’s legs tangled with the defender, but ref Kevin Friend decided not enough to award a foul and Everton escaped.

Just after the hour Saints came within a whisker of scoring when Everton were yet again exposed down the right, but Armstrong’s cross shot just evaded Ings arriving to touch the ball home.

Things only got worse for the leaders on 71 minutes when they were reduced to ten-men for the second consecutive match.

This time it was Digne seeing red after raking his studs down the back of the leg of Kyle Walker-Peters as he was breaking forward.

Two-up, and a man up, Saints were not about to ease up and only a sharp save from Jannik Vestergaard’s header denied the home side a third.