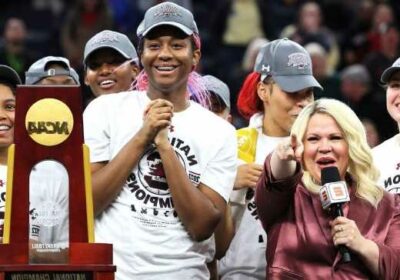 Aliyah Boston was announced as the winner of the 2022 John R. Wooden Award one day after she led South Carolina to its second national title.

The 6-foot-5 Boston has been the hallmark of a dominant Gamecocks squad that spent the entire season ranked No. 1 in the polls. She averaged 16.8 points on 54.2% shooting, 12.5 rebounds and 2.4 blocks per game while also compiling a streak of 27 consecutive double-doubles — an SEC record.

She has been racking up trophies for the past few weeks, having already won the Naismith, Associated Press and Women’s Basketball Coaches Association player of the year awards.

The award, given to the most outstanding player in women’s college basketball, was voted on by a national collection of voters who cover the sport and former winners. Voting took place from March 15 to 22.