Home » Sport » Setback for Starc in run to World Cup

Setback for Starc in run to World Cup Australia's World Cup plans have suffered another setback with concerns over the fitness of star paceman Mitchell Starc.

Just days after returning among the wickets with a man-of-the-match performance in Canberra, Starc is expected to miss the upcoming white-ball tour of India. 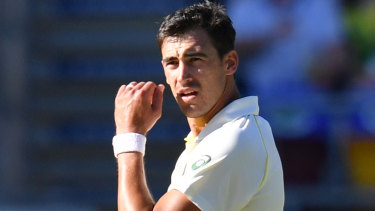 Starc joins Josh Hazlewood on the sidelines, leaving Pat Cummins as the sole member of Australia's big three quicks available in the run home to the World Cup.

The left-armer was the player of the tournament in Australia's success in 2015 but his form in the 50-over arena has since dipped, mirroring his team's. Hazlewood is nursing a back issue which ruled him out of the series against Sri Lanka.

It comes as the management of former captain Steve Smith has confirmed the star player will miss the one-day series against Pakistan.

Cricket Australia remain uncertain when Smith will return to the field after elbow surgery with an update expected after he has his arm out of a brace at the end of this month. 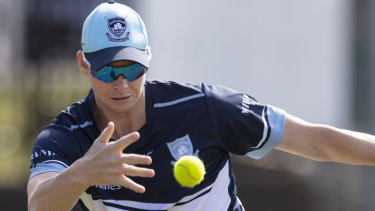 On the mend: Steve Smith is likely to make his return in the Indian Premier League.Credit:AAP

Smith's agent Warren Craig insists he will need only a further "three and a half weeks" before he is ready to play and refuted a report suggesting the batsman would miss the World Cup and instead prepare for the Ashes with games for Australia A.

Smith is eligible to represent Australia from March 29 but his injury will prevent him from getting the match practice coach and selector Justin Langer said he wants before recalling him to the national side for the games against Pakistan.

The schedule for that series is yet to be released but it's understood two games fall after the suspension expires.

Smith and Warner will use the Indian Premier League to get matches under their belts before the World Cup squad is named.

"Until the brace comes off we don't know for sure but all current opinion is that he'll then have about three and a half weeks [before being ready to play]," Craig told cricket.com.au.

Langer has said a lack of games is the only obstacle Smith and Warner, who is also recovering from elbow surgery, need to overcome to play in the World Cup.

Selectors will name a touring party this week for the campaign in India that is expected to closely mirror their plans for the defence of their title. Australia have two Twenty20s and five ODIs before heading to the UAE to take on Pakistan.

Despite missing their first-choice attack, Australia were competitive against India, losing 2-1. In both defeats they pushed India into the final over of their run chase.

Peter Siddle and Billy Stanlake, who was dropped by Adelaide in the Big Bash League, are the bowlers at most risk of losing their place in the squad.

The recalled pair will need strong displays in India and the UAE if they are to keep Smith and Warner at bay.

Batting in the middle order, Handscomb performed well against India with scores of 73, 20 and 58. The Victorian's proficiency against spin was one of the reasons he was brought back.