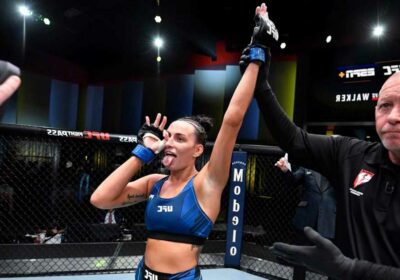 The 23-year-old locked horns with the elder Shevchenko sister early on Sunday morning in the UFC Vegas 38 prelims.

King Casey lost the first round but rallied in the second to secure a sensational TKO stoppage, which came courtesy of a series of hammer-fists from the mount.

In her post-fight interview with former two-division UFC champ Daniel Cormier, an elated O'Neil said: "It felt good [to get the win].

"I say it time and time again, just because I didn't have the opportunity to fight people this, it doesn't mean I'm not ready for it."

O'Neil's credentials were questioned by many prior to the fight, despite her adding two wins to her spotless record in her maiden outings in the promotion.

She added: "I was stuck down in Australia where no one cares about you until you've got so many wins.

O'Neil – the daughter of renowned Scottish kickboxer Cam – is hoping for a bit more respect from her peers after her emphatic display in Sin City.

She continued: "I hope that I proved that to everybody tonight because I'm here to stay."

Prior to her clash with Shevchenko, O'Neil admitted she felt like she'd yet to receive her dues.

She told SunSport: "There was a lot of doubts going in [to my debut].

"I spent my whole career being doubted, really,

"I started at 0-2 as an amateur. And when I started winning, everybody said my dad was giving me easy fights.

"And when I fought overseas, 'The girls didn't get to train because of Covid.'

"And when I Shana [Dobson], I finally felt I was going to get that respect that I deserved.

"But then I still didn't. People said that I beat one of the easy people in the UFC. So that was annoying.

"And when I beat Lara [Procopio], people, I feel like, finally started to respect me a little bit."

O'Neil is open to taking a fourth fight this year, although she admits she plans to listen to her Xtreme Couture coaches and take some much-needed time off.