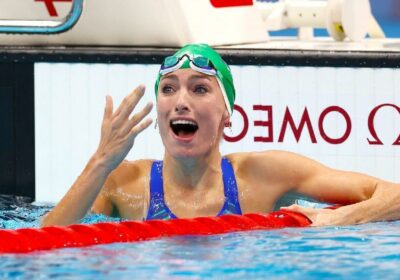 She won the women’s 200-meter breaststroke with a time of 2 minutes, 18.95 seconds, breaking the mark of 2:19.11 set by Denmark’s Rikke Moller Pedersen at the 2013 world championships in Barcelona.

The United States claimed the other two medals. Lilly King set a blistering pace early in the race and held on for a silver in 2:19.92. Annie Lazor grabbed bronze in 2:20.84.

It was the third world record at the Tokyo Aquatics Centre, with the first two coming in women’s relays.

Caeleb Dressel set another Olympic record in the semifinals of the 100 butterfly.

Minutes after Hungary’s Kristof Milak took down the mark in the first semifinal heat, Dressel went even faster with a time of 49.71 seconds in the second heat.

It was the third-fastest time in history and left Milak as the second-fastest qualifier at 50.31.

In the preliminaries, Dressel tied the former Olympic record of 50.39 set by Singapore’s Joseph Schooling to win gold at the 2016 Rio Games.

Dressel will be a big favorite in Saturday morning’s final, though he could get pushed by Milak. The Hungarian already won the 200 fly with a dominating victory.

Dressel picked up the first individual gold medal of his career with a win in the 100 freestyle.

In other swimming finals Friday, Russia’s Evgeny Rylov added the 200-meter backstroke title to his victory in the 100 back, winning with an Olympic-record time of 1 minute, 53.29 seconds.

Murphy was a double-gold medalist at the 2016 Rio Games, extending America’s dominance of the backstroke events that went back to 1992.

Rylov ended the U.S. winning streak with his two golds in Tokyo. Murphy settled for a bronze and silver this time.

Emma McKeon earned another gold medal for the Australian women, touching first in the 100-meter freestyle with an Olympic-record time of 51.96 seconds. McKeon became only the second woman to break 52 seconds in the sprint.

Hong Kong’s Siobhan Haughey claimed the silver in 52.27, and Aussie Cate Campbell took the bronze in 52.52. American Abbey Weitzeil was last in the eight-woman field.

The Australians have won four individual women’s events at the Tokyo Aquatics Centre, in addition to setting a world record in a 4×100 free relay that included both McKeon and Campbell.