Home » Sport » Sarah Fuller was ‘pissed off’ with the lack of enthusiasm on the Vanderbilt sidelines, and she told the team how she felt in an impassioned halftime speech

Sarah Fuller was ‘pissed off’ with the lack of enthusiasm on the Vanderbilt sidelines, and she told the team how she felt in an impassioned halftime speech 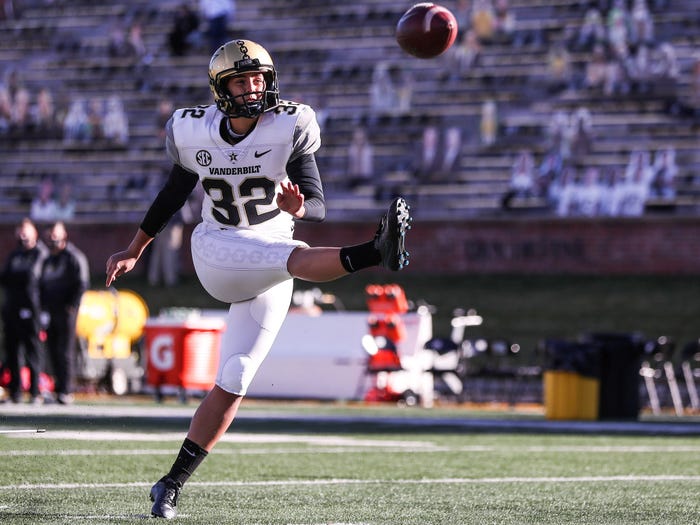 She's also ready to help turn the team around.

Fuller became the first woman to participate in a Division I football game when she kicked for Derek Mason's Vanderbilt squad against the Missouri Tigers on Saturday. Mason lost his head coaching gig after the winless Commodores failed to score a single point in the SEC matchup, and the women's soccer goalkeeper-turner-kicker was quick to recognize an attitude problem on the sidelines that likely contributed to their losing ways.

Even though she had only just joined the team, Fuller didn't hesitate to call her new teammates out in an impassioned halftime speech.

"I do care. I care about the team, and I want them to do well," she added.

Fuller knows a thing or two about what it takes to win. At the time of her historic kick for the school's football team, the starting netminder was less than a week removed from winning the SEC tournament with the women's soccer team.

The Wylie, Texas, native noted that she and her teammates on the soccer team were "cheering the entire time" throughout their 3-1 victory over the Arkansas Razorbacks in the SEC tournament finale. She credited those "non-stop" cheers for powering the program to its first title in 26 years.

"During the SEC tournament, my entire team was cheering the entire time," Fuller said. "It didn't matter if we were in the locker room or if they were on the sidelines. I think they're what won it for us."

The atmosphere on the sidelines during Saturday's massacre couldn't have been more different, according to Fuller. She said it was apparent early on that the enthusiasm was lacking among her new football teammates.

"If I'm going to be honest, I was a little pissed off at how quiet everybody was on the sideline," Fuller said. "We made a first down, and I was the only one cheering, and I was like 'What the heck? What's going on?' And I tried to get them pumped up, and I was like 'You guys need to start cheering your team on.'"

As it turns out, Fuller wasn't the only one thinking those things. She said coaches came up to her after her halftime speech and admit that they've "'been wanting to say that for a while now.'"

Players, too, were on the same page, according to Fuller.

"I had guys come up to me. I hope I gained their respect," she said, per ABC News. "It wasn't ill-intentioned at all. I just want this team to succeed and do well."

The Commodores are scheduled to take on the No. 9 Georgia Bulldogs Saturday at 4 p.m. Though it remains unclear whether Fuller will join the team down in Athens, the newly-minted kicker said she's "sticking around until someone tells me to go."