San Antonio Is Quiet at Outset of Women’s Basketball Tournament 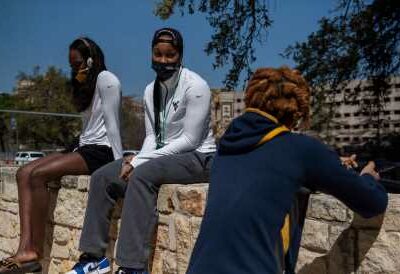 SAN ANTONIO — Over the last few days in San Antonio, it would not have been unusual to see a women’s basketball team walking from its hotel to the coronavirus testing facility at a nearby convention center.

It would be the biggest pack of pedestrians wearing basketball merchandise in town at the outset of the 2021 N.C.A.A. women’s tournament.

San Antonio is not sleepy. Residents and tourists are here for the nightlife, food and warm weather, and there’s a 50-50 chance that they have masks on outside despite the local recommendation that people wear them on county property.

But here for basketball? No — not yet, anyway.

“Some people have asked where we’re from, what game we’re playing, and know that the tournament is here,” Skyler Curran, a junior guard for High Point University, said in an interview after her virus test on Sunday. 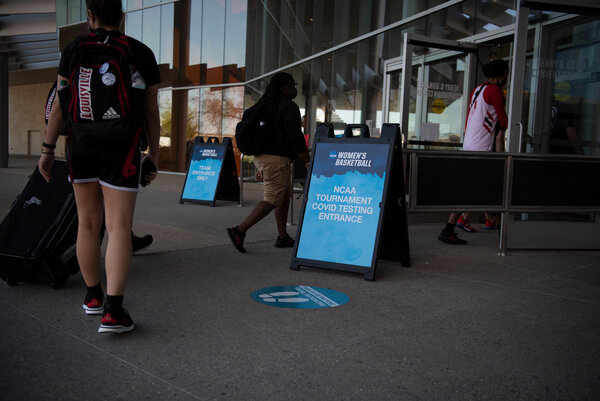 The first games of the 2021 women’s basketball tournament tipped off Sunday, days after images and statements regarding inequities between the men’s and women’s tournaments circulated on social media, highlighted by differences in workout facilities, meals and virus tests.

“We all went through the same stuff this year, we all took the same precautions,” Curran said. “We all work for the same thing every year — and for us, especially, our first time being here, and we were excited for the experience — and for us to get here and to see our facilities and their facilities be better essentially because they are men, that was super frustrating.”

At the men’s tournament in Indiana, players and staff are tested in their hotels daily, no travel necessary, according to David Worlock, an N.C.A.A. spokesman. All of those tests are polymerase chain reaction tests, which are more sensitive and less likely to produce false negatives than rapid antigen tests, which women’s teams are mainly receiving.

“With the obvious disparity between the women’s and men’s tournaments, the message that is being sent to our female athletes, and women across the world, is that you are not valued at the same level as your male counterparts,” Stanford Coach Tara VanDerveer wrote in a statement posted to Twitter on Saturday.

Mark Emmert, the N.C.A.A. president, apologized for the training room setup in an interview with The New York Times and other organizations on Friday, calling the situation “deeply disappointing.”

But the differences between the two tournaments extend beyond the facilities and testing. Fans are not permitted to attend games in San Antonio and nearby cities until the round of 16, Lynn Holzman, the N.C.A.A.’s vice president for women’s basketball, said in an interview on Thursday. The men’s tournament in Indiana has allowed a limited number of in-person spectators from the start.

For now at women’s games, six members per individual in a team’s travel party can enter the stadium. All games starting with the round of 16 will be played in the Alamodome, which is bisected by a curtain to designate two courts and will allow up to 17 percent capacity including staff, teams and fans.

In Indianapolis, the hub for the 2021 men’s tournament because of virus concerns, it is hard to turn a corner without seeing a massive “March Madness” banner draped over a skywalk, a bracket hanging off the face of the J.W. Marriott Hotel or pop-up merchandise stands selling T-shirts, hats and water bottles emblazoned with college basketball insignia.

Not in San Antonio. Signs hang from lampposts near the Henry B. González Convention Center reading, “San Antonio Is Tourney Town, March 21-April 4” or “2021 Women’s Final Four, San Antonio,” if a passer-by is close enough to discern them. Police cars line locations being used by the tournament, but are otherwise unobtrusive.

The airport and hotel lobbies in Indianapolis are adorned with “March Madness” signs, and there are tables with trinkets for sale, stickers bearing logos and social distancing recommendations. San Antonio offered a few floor stickers, official signs that read, “N.C.A.A. Women’s Basketball, Team Entrance Only,” and clipboards posting printed-out pages to advertise the Final Four.

Precautions, taken in congruence with local health authorities to limit contact and spread of the virus within the so-called controlled environment, prevent those who are not among the members of athletic programs or officials who would come in contact with them from entering places used by the N.C.A.A., including food delivery servers and even lower-level credentialed officials.

Coronavirus cases have been trending downward for several weeks in the San Antonio area, according to Anita Kurian, the assistant director of the city’s public health department. There have been fewer than new 300 cases on average per day in Bexar County, Texas, in the last week, according to a New York Times database.

Players and staff will stay in their individual rooms for the length of the tournament, meeting virtually unless they are headed to the convention center for daily antigen testing, practices or meeting room gatherings. Two of the hotels housing teams — a Holiday Inn near the River Walk and the St. Anthony — take teams everywhere on buses with police motorcades, regardless of distance, according to Paul Jacobs, a travel agency employee working the tournament. All remaining teams will move to a centralized hotel across from the convention center for the round of 16.

Meals, provided by the N.C.A.A. or bought by the programs themselves, are taken alone in rooms, unless coordinated in a team’s meeting room or grabbed in the morning at the convention center. Teams have some autonomy over how they want to meet.

Some cope with the isolation better than others. Curran and her teammates, thankful to be in the tournament, play cards online, do school work or otherwise relax when they are not together.

“The new Justin Bieber album came out this weekend, so I have been listening to a lot of that,” Curran said.