Russia’s attempt to overturn its four-year ban from international sports this month turned to a familiar courtroom weapon: emotion.

At a private hearing held over four days in the first week of November, Russian sports officials set aside their denials and their phalanx of lawyers pushed back from their papers, allowing six Russian athletes to take a starring role. The athletes spoke not of what Russia had done in pursuit of victory, but about what they stood to lose, and they all had the same message: Please do not punish us for something we had no part in.

The emotional pleas to the panel of three arbitrators at the Court of Arbitration for Sport in Lausanne, Switzerland, appeared to be an effort to humanize the consequences of a worldwide ban on Russian sports that the World Anti-Doping Agency imposed last year.

But the stakes of the case — for Russia, for antidoping regulators and for global sports — could not be higher.

If Russia cannot get its ban lifted, it faces several more years in the sporting wilderness, with its athletes, its flag and even its name barred from high-profile events like the Olympics and the World Cup.

But it is the other outcome that worries antidoping officials. If Russia succeeds in overturning its ban — the first blanket punishment issued to an entire country under new regulations drawn up by WADA, the global antidoping regulator — a yearslong effort to have Russia pay a price for one of the most sophisticated and brazen cheating schemes in sports history will be seen to have failed.

“This is after a long time, years we’ve had this, and now it seems like we’ve come to the end and the final chapter is being written now,” he added. “Of course, in all good novels the end is often the most interesting part.”

The result of the hearing is expected by the end of the year. 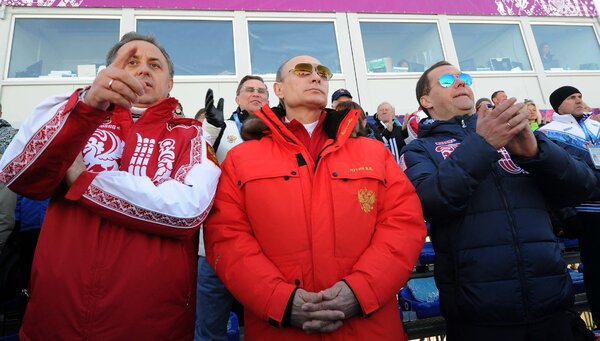 Those present at the hearing Nov. 2-5 described an overwhelming show of force by Russia, with a horde of sports lawyers deputized to act for Russia’s Olympic committee or parties like the International Ice Hockey Federation, all of whom oppose the ban. As many as eight different legal teams spoke on Russia’s behalf, according to a person present at the four-day hearing.

Much of the focus was not on whether Russia had manipulated testing data — WADA produced evidence last year that it did — but whether the punishment fit the crime, and whether the antidoping agency had overreached by issuing an all-encompassing ban that will affect athletes, sports officials, politicians and other Russian government agents.

That the antidoping agency could issue such a punishment at all was the result of a change to its rules as global sports organizations sought to punish Russia for its doping activities. Those activities are believed to have corrupted dozens of major international competitions, including, most notably, the 2014 Sochi Winter Games.

Before the rules change, individual sporting organizations were left to determine their own punishments. Even after the scope of Russia’s state-sponsored doping program was laid bare before the 2016 Olympic Games in Rio de Janeiro, few did. In Brazil, only track and field and cycling issued blanket bans to Russian athletes after the International Olympic Committee refused to impose its own broader sanctions.

More than a year after the Rio Games, Russia was finally barred from the Olympics by the I.O.C. But to many in the athlete and antidoping community, the punishment — which barred Russia’s flag and anthem but allowed its athletes to take part — did not go far enough. Russia arrived at the Pyeongchang Games with a large team, its biggest since Sochi.

WADA’s ban, announced last December, is the toughest yet. All Russian athletes, except for those in a vetted group who can prove they had no connection to the country’s doping program, will be barred from all top-level international sporting events for four years. Those cleared to perform will only be able to do so as neutrals, and in uniforms that will denote them as such.

At the hearing this month, according to two people present at the hearings, Russia’s lawyers argued that WADA had gone beyond reasonable limits with its punishments, and even beyond what it legally could do within the scope of its statutes.

WADA’s legal team countered by describing its efforts as something akin to a bureaucratic housekeeping, an attempt to bring in-house — and standardize — the sanctioning powers that had been left to individual sports federations.

But they also pointed out the dire consequences of failing to punish Russia for its actions. The country had not only undertaken a doping program that used state resources, including the successor agency to the K.G.B., to accomplish its goals, the lawyers said, but it then used the same forces in a cover-up its actions.

If WADA is not allowed to police those who break its rules, the lawyers argued, then it will be rendered powerless to stop industrial-scale doping in world sports.

WADA declined to comment on the hearing, or its legal strategy.

The sheer number of interests represented at the hearing gave a hint at the stakes. A lawyer for the I.O.C., for example, sought clarification on the ban on Russian government officials solely as a practical matter. According to a lawyer representing one of the groups backing Russia’s cause, the question was hypothetical but important: Might the I.O.C. face punishment if Russia’s president, Vladimir V. Putin, attended a major competition like the Olympics as a guest of the host country’s head of state? Would other governing bodies potentially face the same risk at other events?

Most of the interested parties, though, seemed to be participating as part of a show of force backing Russia’s case. In addition to the six athletes who made personal pleas to the court, lawyers representing 50 other Russian athletes argued on their behalf, saying it would be wrong to punish them for the crimes of others.

Those emotional appeals for clemency were followed by another from a longtime ally of Russian sports, ice hockey’s global governing body. Throughout its years defending itself from the cheating charges, Russia has always found a reliable backer in René Fasel, the International Ice Hockey Federation president. Fasel has long argued against banning Russia’s colors and symbols from sporting events.

In the hearing, Russia’s lawyers argued some sports, like hockey, would be disproportionately affected because their championships are held more regularly than others like soccer’s quadrennial World Cup, meaning Russia’s team could miss four editions of hockey’s top event instead of just one. The punishment also bars Russia from hosting events, putting in doubt plans for hockey’s 2023 world championship, which is scheduled to be hosted by Russia in St. Petersburg.

“We need to find people who made mistakes and punish them, but collective punishment cannot be applied,” Fasel told Russia’s TASS news agency a day after the hearing. “Now we have the same task: We must support the Russian Ice Hockey Federation and the I.I.H.F. and fight against collective punishment.”

But such actions, WADA’s lawyers argued, were necessary to punish Russia for the sheer scale of its wrongdoing.

“It’s a test of whether the system is strong enough and whether it’s built to handle big schemes, doping cases like this one,” said Ask, the Danish doping official.

“The system was constructed for athletes to obey rules, but this is a more complex, more organized scheme,” he added. “It’s now an open question whether the system is strong enough to hold a state to account. That’s the big question, and that’s what we are all waiting to see.”