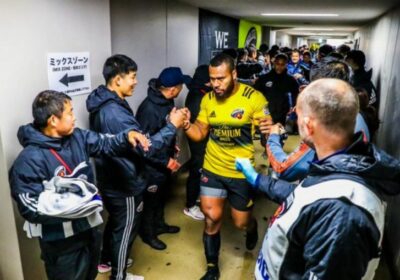 TOKYO (AFP) – Japan’s Top League rugby has been put on hold after scores of players tested positive for the coronavirus, the latest setback for sport in the country just six months before the Tokyo Olympics.

The postponement of the Top League, which features stars including All Blacks Beauden Barrett and Kieran Read, comes during a surge in cases which has prompted a state of emergency in Tokyo and other parts of Japan.

Sixty-seven cases have now been reported by the Top League, which was due to start on Saturday (Jan 16). Officials have not identified those who tested positive, or said how many are players or staff.

“It’s really sad that we have to postpone the Top League just days before the opener,” Japan Rugby Football Union chairman Kensuke Iwabuchi told an online news conference on Wednesday.

“It’s disappointing for the players and teams as well, because we’ve all been working hard to start the season on this date. But everything has changed in the last few days.”

Postponing the season is an escalation from Tuesday, when two games were cancelled after 46 cases came to light at four clubs.

Top League officials said they hope to start playing in early February and complete the season as scheduled on May 23, possibly under a new, more condensed competition format.

However, they cannot rule out a late finish which could affect Japan’s national team, who are due to play the British and Irish Lions in Edinburgh on June 26.

“Things are changing day by day, so we need to be very flexible,” said Top League chairman Osamu Ota.

“We need to identify who have come into close contact with those infected and decide how long they should be kept away from the group. There are various factors that we need to consider in rescheduling the season.”

Japan’s spike in cases has raised fresh concerns about the postponed Olympics, which are due to start in July.

As in other countries, sport in Japan has been badly disrupted by the coronavirus. Attendances are currently capped at 5,000 people or half capacity, whichever is lower.