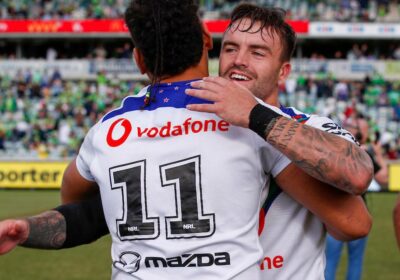 Warriors coach Nathan Brown has labelled the performance of Roger Tuivasa-Sheck as “outstanding”, after their improbable 34-31 victory over the Raiders on Saturday.

The captain was one of the key figures in an historic comeback, statistically the biggest in the club’s history.

Tuivasa-Sheck ran for more than 250 metres, made two line breaks and scored their penultimate try.

He seemed to be everywhere the team needed him to be in the second half, epitomised by the stunning play in the final 15 seconds, when he somehow prevented Jordan Rapana from scoring in the corner.

“That was great,” said Brown. “Roger, like a lot of our boys, [was] just a fraction away in the first half and his second half was outstanding.

“When we had the round one win against the Titans he saved a couple and saving tries is probably more important than scoring because that’s one less you need to score.

“Roger’s contribution in the second half was a good captain’s knock. In the second period of the game we had a lot of people that did pretty well for us and obviously Roger [was] one of them.”

But they rallied superbly, against a gallant but clearly exhausted Raiders team, who lost three forwards in the first quarter to injuries and concussion.

The Warriors scored four tries in a 26-minute spell, capped by Adam Pompey crossing in the left hand corner with three minutes to play. There was further late drama as the Raiders regathered from a short kick-off, but Tuivasa-Sheck’s final act prevented another twist.

While delighted with the result, Brown hopes his team will heed some vital lessons from the performance. After a positive start, the Warriors fell away badly in the second quarter, conceding three tries in the space of eleven minutes.

At times it was a graphic illustration of the difference between an established top-four outfit, and one that wants to become a playoff contender.

In the first half the Warriors weren’t polished enough on attack and too often the wrong decision was made. That led to a turnover, or the receiver under pressure, whereas the Raiders were clinical at the other end.

“We actually started the game okay,” said Brown. “Then they got a few injuries and we [were] the ones that seem to be affected by emotion. Our defence was not very good at all and they were rolling through us, falling through us.

“We’d actually had our best week of training this week since I’ve been at the club, so I didn’t see that coming but credit to the Raiders they rattled some points up quick on us and that was obviously disappointing.”

Circumstances meant the Warriors had a second chance, as fatigue kicked in for the undermanned Raiders in the second half, and the visitors were good enough to take advantage of the situation.

They’ll need to be more consistent to really progress this season, but it was a step in the right direction.

“You’ve got to give the opposition huge credit [after] what they went through so early in the game,” said Brown. “It shows what they’ve created down here and it should be a great lesson for us because that’s obviously what we want to get to.

“On the positive side for us to be able to score 30-odd points in one half of footy shows that we’ve certainly got the makings of the team if we get some other things right.”

The only sour note was another key player sidelined for an extended period, with Brown confirming that Peta Hiku had suffered an MCL (medial collateral ligament) knee injury in the second half.