JOE ROOT and Rory Burns scored centuries as England produced a solid and steady batting performance in the Second Test.

But, with two days remaining, England will need to conjure up some magic if they are to secure a victory and level the series at 1-1.

When rain brought a premature close to day three with 16.2 overs unbowled, England had reached 269-5 in their first innings – still 106 runs behind the Kiwis.

For Root, it was a welcome return to form after recent questions about whether the captaincy was harming his output as a batsman.

He set out his stall to make a century – no matter how long it took.

So his 17th Test century was his slowest – coming from 259 balls – and a monument to patience, concentration and determination.

Root was following the grinding strategy adopted in this series by New Zealand’s batsmen and wicketkeeper B.J.Watling in particular.

On 47, Root was given out caught behind down the legside off Daryl Mitchell. But he knew he had not touched the ball and reviewed immediately. The TV evidence supported him.

He reached three figures in a Test for the first time since February when an attempted cut shot bounced perilously close to the stumps and over Watling’s head for four. Even Root could smile about that slice of fortune.

Burns had been dropped twice on the second evening but played with much more assurance on day three. 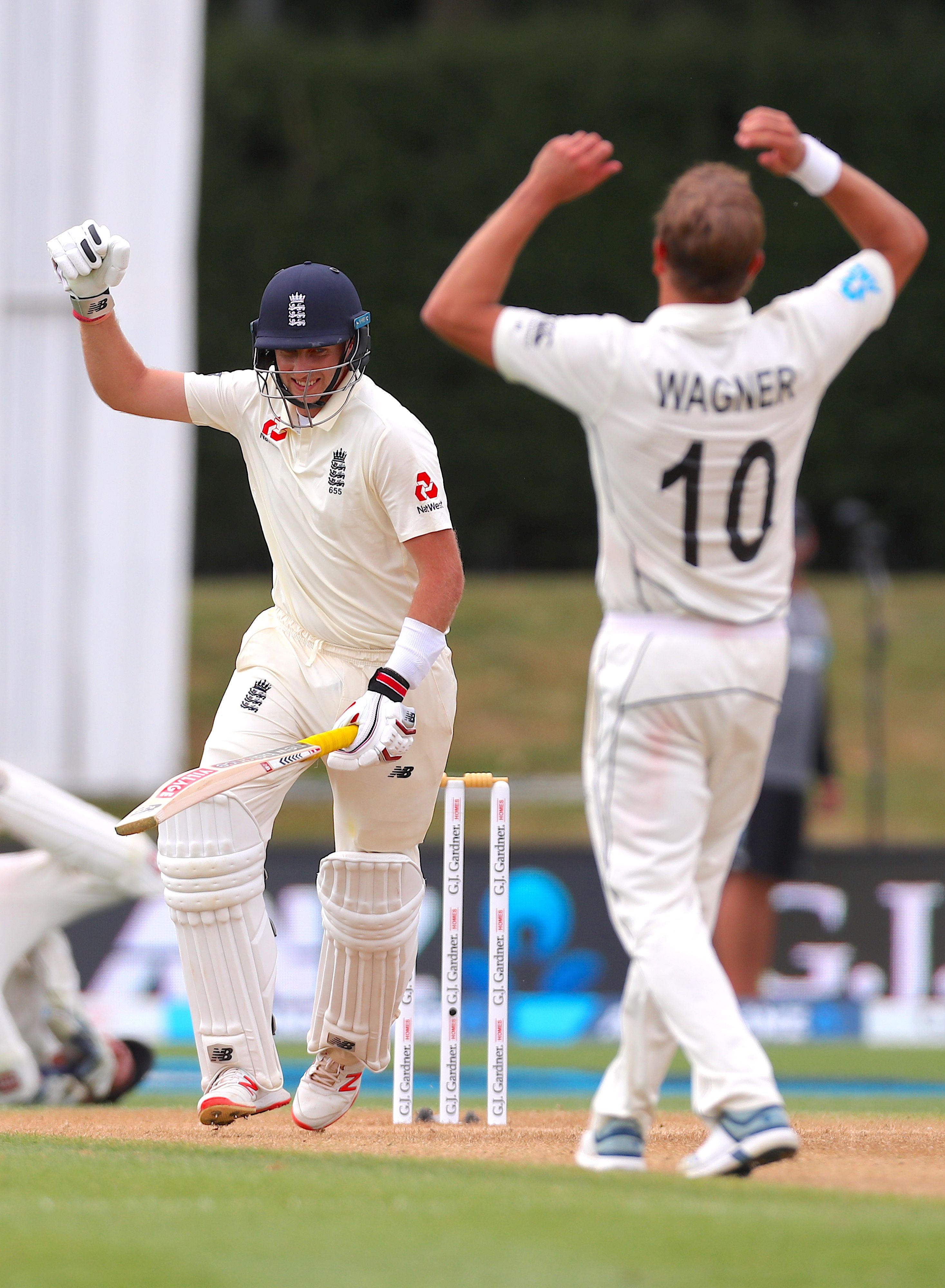 He produced some powerful pull shots when bouncer king Neil Wagner dropped short and clipped effectively off his legs.

This was his second Test hundred, following one against the Aussies at Edgbaston during the summer. But his innings ended from the next ball he faced after reaching the milestone.

Burns was left a couple of inches short by Jeet Raval’s throw from mid-wicket as he attempted a second run. He jogged the first run and was late to sense the danger. He would have got home if he’d dived.

Burns and Root put on 177 for the third wicket in 64 overs. No frills, not much aggression, just low-risk accumulation.

For all his moving parts and unusual method, Burns is beginning to put together a decent Test career. He certainly has a good mentality and does not seem to be fazed by taking more blows to the body than most batsmen.

Burns said: “Stuart Broad told me he fancied me to score some runs so I’m glad I made his words come true! I thought I played quite well but it came to a disappointing end with the run out.

“It was nice to see the skipper get his runs. He’s obviously a very good player and a lot of stuff has been said. When he bats like that, everyone is behind him.”

Ben Stokes made 26 before edging to slip when Tim Southee extracted a little lift and movement from the pitch.

Zak Crawley’s debut innings did not last long. The Kent batsman, playing because of Jos Buttler’s back injury, had scored just one when he edged Wagner and Watling held a straightforward catch.

Spinner Jack Leach, dropped for the Second Test, was released after a night in hospital because of gastroenteritis. Leach suffers from Crohn’s disease, which affects the bowls and digestive system.