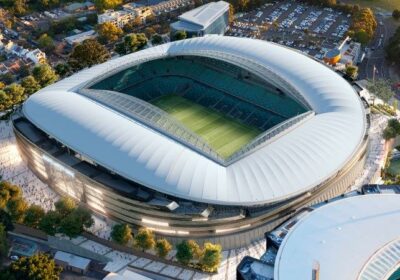 Three major football codes are locked in a race to stage the opening event at the new Sydney Football Stadium next year with gates set to open at the rebuilt venue in Moore Park as early as August.

The only event currently booked is a Justin Bieber concert in late November but the Sydney Roosters, Sydney FC, Wallabies, Socceroos and Matildas are all vying to host the first match played at the new 45,000-seat stadium. 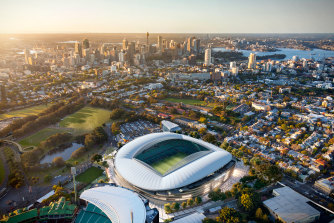 Football, league and rugby are in a race to host the first match at the new SFS.Credit:Artist’s impression

An opening date is yet to be revealed by the NSW government, however they have flagged the venue as being ready in time for the NRL finals series in the second week of September. The Roosters are hoping the stadium will be completed even earlier to open the stadium with their round 25 match against rivals South Sydney on September 2.

However, rugby league could be pipped by football with Sydney FC flagging a derby against Western Sydney Wanderers at the new stadium in the opening rounds of next season as a contender for a curtain raiser at the SFS, as well as a potential friendly against an overseas club in pre-season. Club sources informed The Herald they are in talks to host a European club in August 2022 however it could be logistically difficult with most leagues starting early next year to accommodate the November-December break for the 2022 World Cup in Qatar.

It’s understood Rugby Australia is also vying to have the opening match at the stadium, proposing a Test match between the Wallabies and South Africa.

“The new Sydney Football Stadium will be a world-class facility,” Rugby Australia CEO Andy Marinos said. “We are in ongoing discussions with the NSW Government about how rugby can help contribute to the excitement and celebration of this brand-new venue.”

The new SFS is 80 per cent complete, with seats already being bolted into the southern end and frames erected for the roofing of all four stands.

“It’s so exciting to see the final pieces taking shape at our fantastic new SFS. We’re beginning to get a real feel for what fans will experience when the stadium hosts major events,” NSW sports minister Natalie Ward said. “Work is now on the home stretch and the stadium is on track to be finished and open by the NRL finals series next year.”