ACT Brumbies veteran Josh Mann-Rea says the rise of Folau Faingaa will drive him to work harder to win back his starting spot next year when he attempts to bury 18 months of injury frustration.

But the 37-year-old says a snapped hamstring and only a handful of games since July, 2017 won't force him to rush a decision on his future beyond the end of the Super Rugby season. 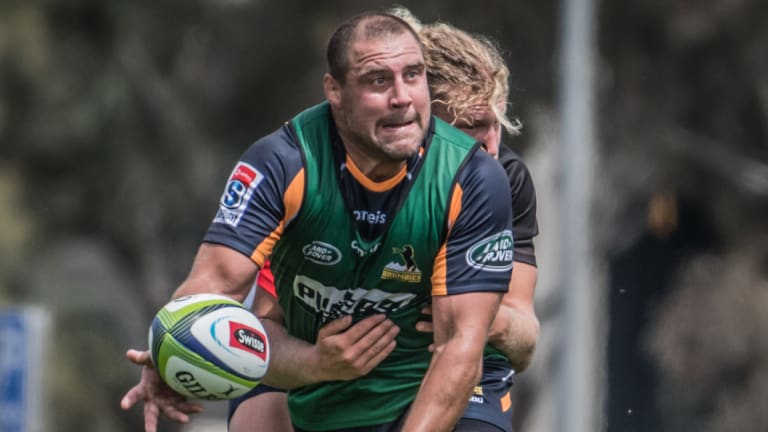 Josh Mann-Rea is happy to be injury-free and ready to throw himself back into Super Rugby.Credit:Karleen Minney

Mann-Rea and Wallabies rookie Faingaa are set to compete for the Brumbies' No. 2 jersey next season, giving coach Dan McKellar a tough choice for the opening game on February 15.

Mann-Rea was the first-choice rake at the start of this year, but his hamstring snapped off the bone after just three games. That opened the door for first-year hooker Faingaa to make a rapid rise to the top.

Faingaa has gone from working as a concreter and garbage collector in Sydney to Wallabies and Brumbies hooker in the past 18 months, putting him in contention to earn a World Cup berth next year.

"We'll see how it works next year, we've got Connal [McInerney] as well and that's one good thing with the Brumbies – we've always had good hookers putting pressure on each other," Mann-Rea said.

"[Faingaa] is a bloody good talent and so is Connal. Either way the way Dan wants to run it, I think we're pretty lucky in that position. It's going to be a good dynamic at hooker next year.

"Missing all of last year, I just want to get back and play good football. If you do that, it puts you in good stead to get into the starting team each week. There's different motivation this year, get back and playing is the first one."

Mann-Rea was ruled out for six months when his body crumpled awkwardly at a ruck in the game against the Melbourne Rebels in March.

He lost feeling in his leg and couldn’t stand up, leaving him with a torn hamstring and torn adductor. He had to wait until September before getting a chance to play again.

But Mann-Rea, who will start next season as a 38-year-old and the oldest player in Super Rugby, used his time off to extend his career instead of letting injury problems shorten his time at the Brumbies.

The resilient and diligent hooker was a late bloomer and has played 60 games since making his debut in 2013. His contract expires at the end of 2019, but that doesn't necessarily mean the end.

"The main thing is to get through the pre-season, try to develop my game still and then just see what happens," Mann-Rea said.

"There's a lot of footy between now and the end of next year, you don't know what can happen. I wasn't expecting my hammy to be torn off the bone this year.

"So I'm not really focusing on anything else other than playing. I'll just take next year as it is and see how I'm feeling at the end. If I'm feeling well and the Brumbies want to keep me, that could be an option. If I'm not, and I'm busted and had enough, I can always hang them up and pursue other things."

The Brumbies are starting to plan beyond next year given a host of players are coming to the end of their respective contracts, largely due to the end of a four-year World Cup cycle.

Co-captains Sam Carter and Christian Lealiifano, David Pocock, Tevita Kuridrani, Henry Speight and Rory Arnold are all players who are yet to decide where they will be in 2020 and beyond.

But the club is confident it can retain a core group despite interest from overseas teams and the Brumbies are focused on chasing a return to the finals this year.