Rebels release Naivalu to join Reds at urging of the Wallabies As reported by the Herald, Queensland winger Izaia Perese’s shock defection to the NRL’s Broncos has made way for Naivalu to sign with the Reds, who announced the deal on Monday after he was granted a release by the Rebels. 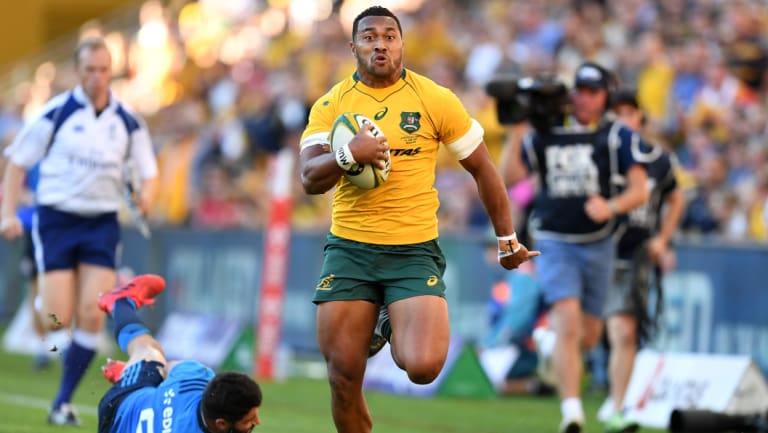 Greener pastures: Sefa Naivalu believes his move to the Reds will strengthen his Wallabies prospects. Credit:AAP

The Melbourne-based franchise explained the decision was in part motivated by Wallabies management, who were keen to ensure Naivalu's playing opportunities before next year's World Cup.

"We want to be a collaborative organisation that works with all stakeholders for what is best for Australian rugby and especially for rugby in Melbourne," Rebels chief executive Baden Stephenson said.

"Sefa was contracted with us for 2019 and if we didn't feel extremely comfortable and committed to the other players in our program then we wouldn't have approved this release."

Naivalu was the first player from Victoria's Premier Club Rugby competition to be signed by the Rebels after making his name at Box Hill.

Stephenson said the decision to approve the release was in part decided by the outside back stocks at the Rebels including Marika Koroibete, Jack Maddocks, Dane Haylett-Petty, Tom English and youngsters Campbell Magnay, Semisi Tupou and Sione Tuipulotu.

Naivalu regained his Wallabies jersey at the end of the year, scoring against the All Blacks in Japan in October before featuring in Australia's Spring Tour clashes with Wales and England.

The 26-year-old, who has now made 10 appearances for the Wallabies, said the decision to move to the Reds would strengthen his international claims.

"It's a great opportunity for me to earn selection at the World Cup next year and to also to gain more game time," the Fijian-born winger or centre said.