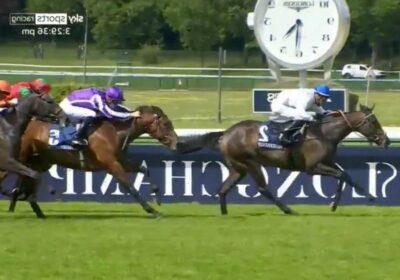 RANK 66-1 outsider Coeursamba survived a stewards' enquiry and Mother Earth charge to land the French 1000 Guineas in a controversial finish.

The huge longshot had only one victory to her name, which came all the way back in last June.

But she showed major guts and determination to see off English 1000 Guineas winner and big 6-4 favourite Mother Earth under Cristian Demuro.

Betfair: Min stake £10 on Horse Racing, 12th – 16th May, min odds 2.0. Only deposits made using Debit Cards or ApplePay will qualify. Free bets are awarded after the qualifying bet has settled, valid for 30 days, must be used on Horse Racing markets. Max £40 in free bets. T&Cs apply. 18+ Begambleaware.org

However, the result was in jeopardy moments after the finish as a stewards' enquiry was called to check for interference.

But after a delay of more than 20 minutes the result was allowed to stand.

Aidan O'Brien, who saw Mother Earth come first at Newmarket on May 2 under a brilliant ride by Frankie Dettori, had a runners-up consolation of £102,053.

Dettori was not in the saddle for the showpiece French race and Christophe Soumillon took the ride instead.

Rouget said: "It's a pleasant surprise.

"I knew she had quality and she had already shown me that double acceleration that the good horses have.

"After that I really didn't know. She could have been fighting for first or eight, it looked a very open race."

O'Brien could at least celebrate St Mark's Basilica landing the 2000 Guineas under an assured ride from Ioritz Mendizabal.

The jockey took the ride after racing chiefs suspended Pierre-Charles Boudot for three months following his rape charge, which he denies.

St Mark's Basilica triumphed at 9-4 ahead of 80-1 shock Colosseo and 25-1 chance Breizh Eagle in third.