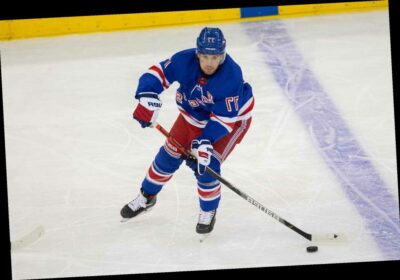 In less than a month, Tony DeAngelo went from top defensive pair to the waiver wire.

The Rangers placed the polarizing DeAngelo on waivers Sunday, the team announced, a day after DeAngelo was involved in a physical altercation with goalie Alex Georgiev following a 5-4 loss to the Penguins, a source confirmed to The Post’s Larry Brooks.

“There’s always rumors, so I’m not going to address rumors,” coach David Quinn said Sunday after practice when asked about a potential incident. “This isn’t about one incident, it’s not about one thing. This is a situation the organization felt was best at this current time. We’ll see how the situation plays out.”

The 25-year-old DeAngelo, whose final shift Saturday lasted 1:43 and included a miscommunication with Georgiev behind the net that led to the Penguins’ game-winning goal in overtime, did not practice with the Rangers on Sunday. He was eligible but was held out, in order to “protect the [waiver] process,” Quinn said. He can be claimed by any team before Monday at noon.

“It’s a decision we made as an organization,” Quinn said, declining to get into specifics when asked if the decision was strictly performance-based.

“In 24 hours, we’ll be able to probably be a little bit more specific and address the situation differently.”

Georgiev, meanwhile, sat out Sunday’s practice for what the Rangers called “maintenance.”

Quinn claimed there was no final straw for DeAngelo, but Saturday’s altercation was the latest in a string of controversies involving the defenseman. He had been benched earlier in the season after taking an unsportsmanlike conduct penalty for slamming the penalty box door. Off the ice, he had recently made headlines for deleting his Twitter account in the wake of the Capitol riots, but not before announcing he would be moving to Parler, the controversial social media platform popular among conservatives.

DeAngelo, whom the Rangers signed to a two-year, $9.6 million contract in October to avoid arbitration, had opened training camp shifting to his off-side on the left to play with Jacob Trouba as the Rangers’ top defensive pair. That experiment barely got off the ground, with DeAngelo going back to the right side less than a week into camp. In the six games he has played this season, DeAngelo was paired with Brendan Smith — they were on the ice for three five-on-five goals Saturday — or Jack Johnson on his left.

Monday, the Rangers will promote Anthony Bitetto from the taxi squad to take DeAngelo’s spot on the blue line, likely with Smith on the third pair. The Rangers also have left-handed defenseman Libor Hajek, who played 28 games last season, on the taxi squad.

“It’s not something as players that you’re very happy about, he’s one of our friends,” Trouba said of DeAngelo going on waivers. “That’s the business of the game. It’s a little bit of a somber mood, but at the same time, you gotta be a professional. … There’s a lot of good defensemen who can definitely pick up the [slack].”

DeAngelo, averaging 18:29 of ice time, had just one point in six games, coming off a season in which he piled up 53 points in 68 games. Still, he had recently been bumped back up to the top power-play unit, with his spot being taken by Chris Kreider during Sunday’s practice.

“Right now, Tony’s our teammate,” Mika Zibanejad said. “You don’t want anyone to go through that and be put in that situation. We’re human beings and it’s not an easy thing to maybe deal with. But we just have to find a way.”