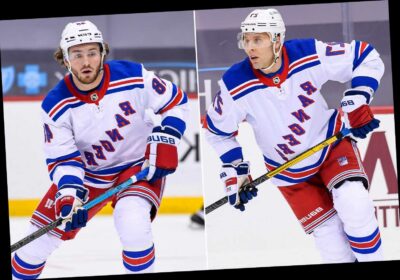 Rangers head coach David Quinn opted to take Brendan Lemieux and Jack Johnson, both of whom had played all four games so far this season, out of the lineup for Sunday’s rematch against the Penguins in Pittsburgh.

Quinn has shown he has zero tolerance for careless penalties after he benched Tony DeAngelo following his unsportsmanlike conduct penalty in the season-opener against the Islanders, and that trend is set to continue with Lemieux. Roughly halfway through the second period of Friday’s 4-3 shootout loss, Lemieux took a tripping penalty with the Rangers up 3-1.

“Lemieux is fine to play, we want to get other people in,” Quinn said on a Zoom call. “I just think it’s after what happened the other night, I think he can play better too and I didn’t love the penalty he took. But listen he’s a big part of what we got going on here, I know he’s going to get back in and do what he’s capable of doing.”

Colin Blackwell, who signed a two-year contract with the Rangers in October and has been on the team’s taxi squad, will make his Rangers debut in Lemieux’s place. With 33 NHL games under his belt over two seasons with Predators, Blackwell needs to play in 27 games this season to meet expansion-draft requirements for the Rangers.

“I love his pace, I love his competitiveness,” Quinn said of Blackwell. “I just love the way he approaches the game. You’re going to get an honest effort out of him night in and night out. Obviously I’ve known him from his Harvard days and I’ve always thought he was a real good player from afar.”

With Johnson out of the lineup, Quinn is turning back to Brendan Smith to take his place on the blue line. After Smith notched an assist in the second game against the Islanders, Quinn thought his game took a dip in the 4-3 loss to the Devils three nights later.

Asked if the switch was more so about getting Smith back into the lineup or having a problem with Johnson’s game, Quinn said it was a little bit of both.

“Jack was solid for us the first few games, thought he struggled a little bit the other night,” Quinn said. “Smitty had a real good game and then I thought dropped off a little bit the second night. We have faith in all seven of our guys, it is going to be that. Guys have to play well to stay in and I just thought it was the right move.”

Assistant coach Jacques Martin faces his former team for the second time Sunday night after serving as an assistant in Pittsburgh for seven years.

“He’s such a professional,” Quinn said of Martin. “He’s got a wealth of experience. He’s a great teacher. I love the things he’s doing with our defensemen and our [penalty kill]. He’s got a great demeanor about him, and he’s just been a great fit for us.”

Igor Shesterkin was tabbed to start, set to make consecutive starts for the first time this season.