Race-by-race tips and preview for Warwick Farm on Wednesday 4. The Art Of The Bar is a very short priced favourite on the back of a runaway win at Warwick Farm last week and it’s difficult to tip against her. It is a tougher task giving weight to most of her older rivals but she looks progressive. Expect to see her lead or sit right on the speed and be the one to catch in the last 200m. 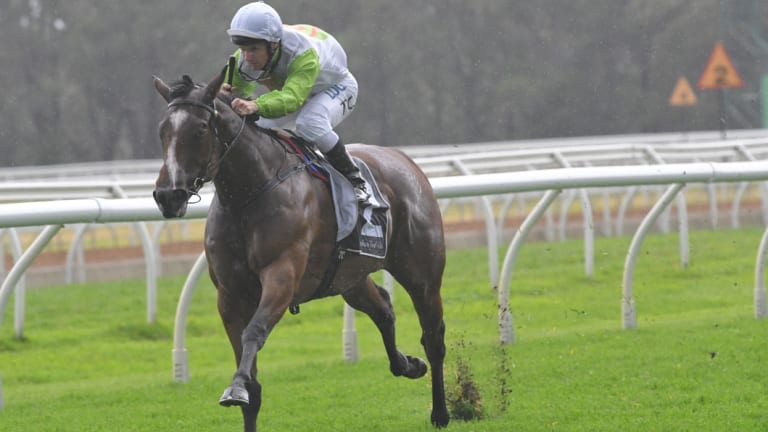 Quick back-up: The Art of the Bar returns to Warwick Farm on Wednesday after a win lost week.Credit:AAP

Dangers: 7. Seles is the other filly in the race and she finished some 6.6 lengths from The Art Of The Bar a week ago but on a good track she’s likely to cut into that margin. Her best effort to date was a win on a good surface while she’s looked to battle in the wet. It would still surprise to see her turn the tables but she should run well. 1. Medovina attacked the line strongly first-up in a handy return then didn’t find a lot at Canterbury. Blinkers go on and if she can find her best form then she’s a threat. 2. Shantou made a promising return with a game third at Hawkesbury behind Skyray and is back into mares company. Yet to win beyond 1100m but will get a nice trail and have her chance to finish off.
How to play it: The Art Of The Bar win, trifecta 4/1,2,7/1,2,7.

3. Above And Beyond has really hit his straps this time in with two quite impressive all the way wins at Gosford and Hawkesbury where he hasn’t looked like being run down. Faces a stiffer test this time around if he lines up in this race against his own age (also accepted race 6) he’ll be competitive.
Dangers: 8. Rosina Kojonup was heavily backed and made light of an outside barrier to post her maiden win at Hawkesbury first-up. Half-sister to She Will Reign with a few raps on her and if she brings the same form into this race she’ll be hard to beat. 4. Bare Naked Lady was a drifter in betting but found herself in front first-up and cruised to a soft win over 1000m at Hawkesbury in fast (wind assisted) time. Promising filly and she’s versatile. Definite chance. 2. Osorno was an impressive winner at 1200m first-up last time in but failed at his only other start last prep before being gelded. He’ll sit back and run home and if they’ve overdone it up front then it brings him right into contention.
How to play it: Above And Beyond each-way, quinella 3 and 8.

1. Zouologist is a big fellow who has been competitive in two starts at 1200m but should really come into his own now with an extra 200m to work with. He was well supported at Canterbury second-up and hit the lead but was grabbed close to the line in a tight finish. Unless one of the first starters is smart he’s entitled to break through.
Dangers: 7. Word For Word has taken some time to make it to the track but there was plenty to like about her latest trial when third at Canterbury. Kicking off at 1400m looks ideal for her and expect her to be finishing off the race strongly. 8. Flying Pierro backs up after basically having no run at Warwick Farm last week where he was favourite over this course. He was held up behind them and dragged out to last, when he finally got out he was well beaten but still ran on. Good track a plus and no surprise to see him improve sharply. 5. Nobu has shown ability but is yet to bring it to race day. Back as a gelding now and his trial over 900m was acceptable heading into a longer race. Form around Master Ash and Thinkin’ Big so he’s worth keeping safe.
How to play it: Zouologist win.

Happy to stay with 3. Haut Brion Her after her debut second at Randwick where she hit the lead in the straight but was run down by stablemate Zalatte. She did want to overrace in the run so with that under her belt, a handy draw and the step up in trip she should be harder to beat this time.
Dangers: 5. Task And Purpose has been costly but is again in the mix. Handy return at Canterbury then a bit plain on the heavy last week though only beaten a couple of lengths. Probably goes back from the wide gate and will have her chance to finish off. 1. Colditz is a very late foal and is on debut with the one trial under his belt a couple of weeks ago at Rosehill. Bred to appreciate this sort of distance fresh and if there’s any support for him it’d be worth respecting. 9. Natanya found the line with a heap of gusto at Newcastle at her second starts and she was specked at odds there. Might be wanting a bit more than 1400m now but if she can continue to improve she could run into the placings here.
How to play it: Haut Brion Her win, trifecta 3/1,5,9/1,5,9.

A lot of the usuals lining up for this staying event so 9. Saint Katarina appeals as an excellent chance as the horse on the way up. She made a long run when scoring over 1850m at Newcastle last start, a sign that 2200m shouldn’t be an issue. She’s the one with all the upside, peaking fourth-up and is sure to be in the finish.
Dangers: 2. Miss Shanti has been very competitive in seven starts this time in and wasn’t suited when forced to chase in a sprint home here last week on a heavy track. Form around her previous run is strong and she’s the logical horse to beat. 7. Knight Star really needed the a good confidence boost and he got it as he raced away to win at Orange a couple of weeks ago. Obviously a step up here but he stays well and is an each-way hope at least. 8. Hirokin doesn’t win out of turn and is yet to win in 11 starts here but has been around the mark as usual, giving Keep Up a run for his money in the Cessnock Cup. Could be there somewhere without surprising.
How to play it: Saint Katarina win, quinella 2 and 9.

12. Above And Beyond takes on older horses if he runs in this event (also accepted race 2) but he’s beaten them in both his wins this time in so that’s no concern. If he can cross them and lead he’ll take plenty of catching at the 1000m but if he finds cover just off them and can unleash then he’ll take holding out.
Dangers: 10. Miss Invincible has been very game in her placings on the Kensington track and looks close to a win. She’s down in weight and has a senior rider this time so from a good gate she’ll be in the hunt for a long way. 6. I Am Special is suited coming back to the 1000m. Overlook her second-up failure as on her fresh effort, a close third over 1100m, she’s right in this. All wins at this trip and drawn to get every chance. 8. Katgully Red is lightly raced and showed ability last time in. Not let go in his recent trial and if they are burning up front he’ll be one charging home over the top.
How to play it: Above And Beyond each-way.

It wouldn’t surprise if 12. Schoolmates runs a big race fresh at each-way odds. He sat on the speed in his trial and was run down by Regent, which won last week, and he marked his debut with a close second at 1400m so the trip suits first-up. With James McDonald booked to ride it says he’s there to run well in a wide open race.
Dangers: 4. Poetic Charmer was well supported and had a picnic in front as he posted a soft win second-up at Canterbury. Not sure whether he’ll find such an easy lead this time but he’s put two good runs together and is one of the main chances. 3. Thy Kingdom Come had support at Randwick second-up and hit the lead but couldn’t sustain it. Drawn well for the first time this prep, close to his peak and is entitled to another chance. 2. Bravissimo hasn’t been ridden close to the speed in his last two as we’re used to seeing and hasn’t been as effective, though not disgraced. Surely he pushes to lead from a wide gate here and if so he can give a good sight.
How to play it: Schoolmates each-way.