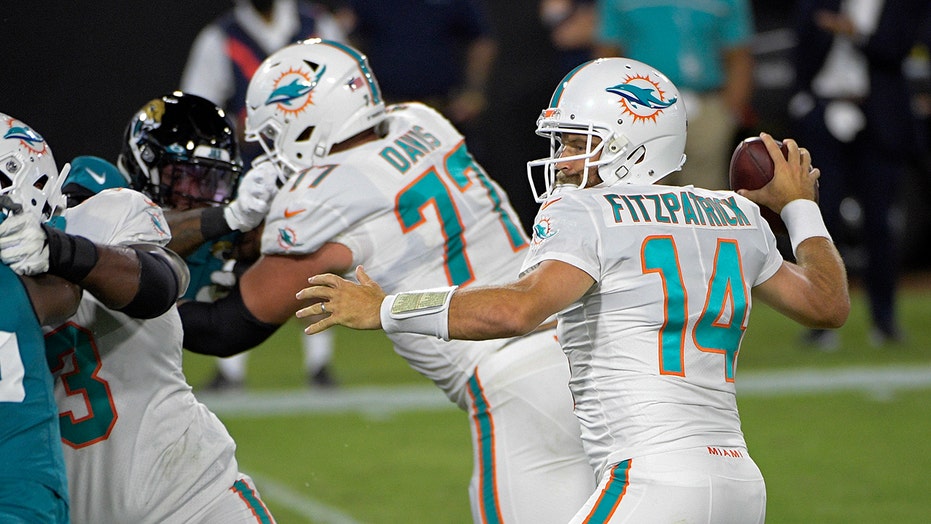 Ryan Fitzpatrick was having the most fun in the Miami Dolphins’ 31-13 win over the Jacksonville Jaguars on Thursday night.

The 37-year-old quarterback hardly acted like the oldest player on the field. He finished 18-for-20 with 160 passing yards. He threw two touchdown passes and ran for another in the victory. It was Miami’s first win of the season after losing to the New England Patriots and Buffalo Bills to start 2020.

Fitzpatrick led the Dolphins on a 12-play drive on their way to their first score of the game, ending with a 3-yard touchdown pass to Preston Williams. The veteran would find Mike Gesicki for his second touchdown pass in the second quarter.

He ran for a 1-yard score in the third to build Miami’s lead to an insurmountable 28-7 lead.

Jacksonville tried to mount a comeback in the fourth quarter with a James Robinson rushing touchdown. But too many turnovers and a stalled offense hampered most of Jacksonville’s drives.

Minshew was down D.J. Chark going into the game and couldn’t get into a real rhythm. He finished the game 30-for-24 with 275 passing yards and a late interception. He also lost a fumble.

Robinson was his top target. He had six catches for 83 yards. He also rushed for two touchdowns and finished with 46 yards.

Jaguars linebacker Myles Jack led all defenders with 11 tackles in the game. Miami’s Kamu Grugier-Hill had eight tackles and a sack.