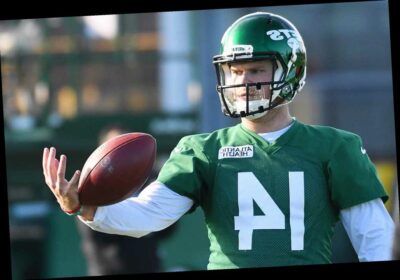 Teams are calling the Jets about trading for Sam Darnold

Former Jet is going into the Hall of Fame

As the Jets offseason gets under way now with Robert Saleh in place as head coach and his staff hired, all eyes turn to quarterback.

What will the Jets do at the most important position? Will they stick with Sam Darnold for a fourth season and build around him? Will they make a monster move for Texans star Deshaun Watson? Will they draft Zach Wilson or Justin Fields with the No. 2-overall pick?

It is a fascinating storyline that surely will feature many twists and turns over the coming weeks and months. ESPN reported Sunday that the Jets have been fielding calls from teams interested in trading for Darnold. It is not surprising that teams are calling, but it is telling that the Jets are listening. In the middle of the 2019 season, general manager Joe Douglas said Darnold was untouchable. That does not appear to be the case anymore.

A source said the Jets are still undecided about what to do at quarterback, with some people inside the organization in favor of keeping Darnold and others believing it is time to move on.

If the Jets do decide to trade Darnold, here are some teams that could have interest:

The Jets may have to wait to see what happens with the Eagles and Carson Wentz before dealing Darnold, if that is what they decide to do. The Bears are reportedly interested in acquiring Wentz, but if the price tag is too high or if they are outbid by another team, they could turn their eyes to Darnold. Chicago is moving on from Mitch Trubisky, who was drafted the year before Darnold. The Bears currently have Nick Foles on the roster.

The price for Darnold figures to be much less than what the Eagles are asking for Wentz (reportedly two first-round picks). Darnold is 23 years old and has had a poor supporting cast. Someone out there is going to believe they can get more out of him than the Jets have.

There has been some speculation the Jets could get a first-round pick for Darnold, but a second-rounder is more likely. The Bears pick 20th in the first round. Douglas is probably going to have to create a bidding war to get that pick.

Indianapolis is the other team believed to be hot and heavy in pursuit of Wentz. Colts coach Frank Reich is a former Eagles assistant and worked with Wentz in his first two years. Colts GM Chris Ballard is one of the best around, and he may be hesitant to cough up the kind of picks the Eagles are seeking.

It would be an interesting story if the Colts end up trading for Darnold. Indianapolis traded the pick the Jets used to take Darnold to the team in 2018. The Jets got the No. 3-overall pick for three second-round picks and the No. 6-overall pick that year.

The Colts would be a nice landing spot for Darnold. He would benefit from Reich’s coaching as well as a strong defense and running game. He also would be reunited with former USC teammate Michael Pittman Jr.

The Colts have the No. 21 pick in the draft.

San Francisco would appear to have a better quarterback situation than any other team on this list with Jimmy Garoppolo returning from injury in 2021, but the reports and rumors that San Francisco is interested in trading for a quarterback have not stopped. CBS reported over the weekend that 49ers coach Kyle Shanahan is a fan of Darnold.

There is also the obvious connection between the teams now with Saleh coaching the Jets. That could create a trade package that is not just about draft picks but includes some lesser-known players that Saleh wants because of his familiarity with the roster. The Jets did a few trades like this with the Browns when former coach Eric Mangini was there.

Darnold would benefit from working with Shanahan, who his known as a great quarterbacks coach. The 49ers have the 12th pick, which seems too rich for Darnold, but a second-rounder along with a player that Saleh likes could get it done.

The Football Team has a hole at quarterback after Dwayne Haskins washed out. Alex Smith may be back, but he does not have many years left and is not a sure thing because of his injuries. Washington has the No. 19 pick, so that is a starting point for the Jets to ask for. Darnold could benefit from being in the same quarterbacks room as Smith, who mentored Patrick Mahomes in Kansas City.