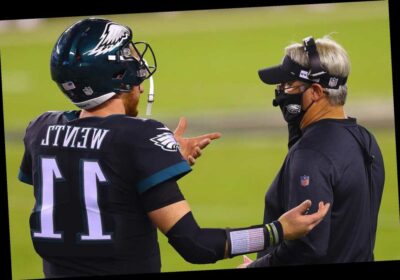 The disconnect between Philadelphia Eagles quarterback Carson Wentz and recently fired head coach Doug Pederson reportedly started even before the former was benched in favor of rookie Jalen Hurts in December.

“Pederson would call a play only for his quarterback to occasionally kill it for no other reason than his personal distaste,” a source told the Philadelphia Inquirer, adding the standoff became “a pissing match” between the coach and the player.

Reports surfaced before the end of the regular season that Wentz planned to ask for a trade because his relationship with Pederson was “fractured beyond repair.”

While the Eagles now are searching for a new head coach following a 4-11-1 season, Wentz’s four-year, $128 million contract extension (with a $34.7 million salary-cap hit) kicks in next season.

Hurts, the Eagles’ 2020 second-round pick, started the team’s final three games after taking over for the benched Wentz during a Week 13 loss to the Packers . The 28-year-old Wentz completed a career-worst 57.4 percent of his passes for 2,620 yards in 12, with 16 touchdowns and 15 interceptions, tied with Denver’s Drew Lock for the most in the NFL.

“Every great quarterback wants to be coached and they want to be coached hard and by the best, and it doesn’t seem like [Wentz] wants that,” a source told the Inquirer. “It’s kind of like whoever’s coaching him is working for him. But it can’t be that way.”