Phil Mickelson will bring the drama in his chase for history 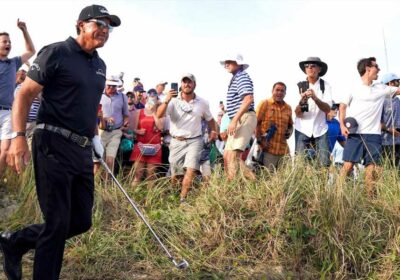 KIAWAH ISLAND, S.C. — You didn’t think this was going to be easy for Phil Mickelson, did you?

When he got to 10-under Saturday after making his fifth birdie of the day without a bogey and walked off the 10th green with a five-shot lead in the third round of the PGA Championship at Kiawah Island’s Ocean Course, you didn’t think Mickelson would get through his entire round without some sort of car wreck, did you?

As it turned out, he did not.

Credit Mickelson for surviving his wobbly moments — a sloppy bogey on No. 12 and a double-bogey thanks to a snap-hooked drive into a lagoon on No. 13 — for getting back to the barn at 7-under and still holding the lead.

Should the lead be larger than the one-shot edge Mickelson has over Brooks Koepka (6-under) entering Sunday’s final round?

Probably. But this is golf and — more to the point — this is Phil the Thrill. This is what Mickelson does. Nothing comes easy. Nothing comes without at least a salt-shake of drama sprinkled onto the proceedings.

But Mickelson must remember this when he wakes up on Sunday morning: It’s all there for him. Everything he plays for, everything that stimulates him professionally is in front of him and he controls his destiny.

Focus for one more day, play a solid, clutch round of golf and he will have a great chance not only to win his sixth career major championship and second PGA, 16 years after he won his first, but also to become the oldest major championship winner in the history of the sport.

Perhaps more important than all of that is this: A win on Sunday would provide proof to Mickelson, beyond a shadow of a doubt, that next month he can finally win a U.S. Open, exorcize the demons of the record six runner-up finishes and complete the coveted career Grand Slam.

The belief that would come from closing the deal on Sunday, staving off the likes of Koepka, Louis Oosthuizen (5-under) and the rest of this world-class field, would be more valuable than the Wanamaker Trophy Mickelson would hoist, the $2 million first-place check and even adding a sixth major to his résumé.

Mickelson said he believes he can maintain the elusive focus that he has lamented losing from time to time as a 50-year-old “because I feel or believe that I’m playing really well and I have an opportunity to contend for a major championship on Sunday and I’m having so much fun that it’s easier to stay in the present and not get ahead of myself.’’

Mickelson will turn 51 on June 16, which happens to be U.S. Open week, and he remains a marvel — even when he can be maddening while throwing away a five-shot lead in as much time as it takes to make a sandwich or a salad for lunch.

“It’s Phil, right?’’ Jordan Spieth said when he finished his third round. “It’s theater. I don’t watch golf, but I promise you I’m going to turn it on to watch him today. It’s pretty incredible. The guy’s got four good rounds on any golf course in him, and no one would bet against that.’’

He’s got one more of the four to go on Sunday.

“He’s phenomenal, he’s entertaining, and what he’s doing, that gives everybody hope,’’ said Gary Woodland, who’s five shots behind Mickelson. “I want to play this game for a long time, but what he’s doing right now coming out and beating up on the other guys, on this golf course, too, it’s very impressive. But any time you’ve got a short game like his and the confidence he has, it’s not surprising.’’

Mickelson’s short-game prowess has been on display all week. He closed his round Saturday with a ticklish up-and-down from a swale to the left of the 18th green to save par and preserve that one-shot lead over Koepka, who had just bogeyed 18 in the group ahead of him.

“Phil is one of the greatest short-game magicians that’s ever lived,’’ Paul Casey said. “He’s got this ability that frankly one or two or three guys maybe I’ve ever seen have. Phil stands out.’’

What has made Mickelson stand out this week is the fact that this has come out of nowhere. He hasn’t had a top-10 finish in a major championship since 2016.

“Maybe just because he hasn’t played the level of golf he’s wanted to recently, you might say that [you are surprised], but I’m not surprised at all,’’ Casey said. “I’m quite enjoying it and I hope he goes all the way. It’s great for the championship, and I love it.’’

So, too, do the legions of spectators who’ve been screaming, “Phil, Phil, Phil,’’ everywhere he walks this week at Kiawah, the echoes of those chants likely to be heard across the Atlantic Ocean.