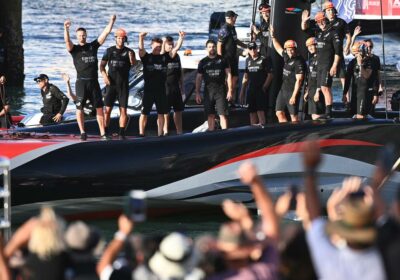 The America’s Cup has been fantastic. So was the Rugby World Cup in 2011. But neither is my favourite international event in New Zealand this century. For sheer energy and fun, I can’t go past the 2015 One Day International Cricket World Cup, and New Zealand didn’t even win that one.

Let me be clear. I said bah, humbug to the people who rubbish the America’s Cup, like former MP Michael Laws, who on Facebook said, “to be honest … not a real sport. Very few compete, it takes mega millions to compete, the rules change at the behest of the previous winner, and technology is key … but, hey, the media liberals in Auckland love it. Got to be real then, doesn’t it?”

Forget the curmudgeons or the media liberals, the fact is that Aucklanders, whether left wing, right wing, or couldn’t give a fat rat’s wing, love the water. One in 11 Aucklanders own a vessel of some kind. No wonder that so many boats were on the Waitemata there were five-hour queues at boat ramps after the racing.

The Cup fever that saw fans of all generations pack out the Viaduct wasn’t some media construct. Television viewing figures show how, even though the America’s Cup final was on a working afternoon, it drew 1.58 million live and streaming viewers on TV One.

So the excitement was genuine, and it proved that when it comes to sport, of many different kinds, Kiwis shouldn’t ever be called the passionless people.

Why did we go so nuts over the America’s Cup? Why did we embrace the stadium of four million so fervently in 2011? And how did the Black Caps become such hometown heroes in 2015 that we all knew that The Hairy Javelin was Grant Elliott’s nickname?

For my money there are three factors in common in all three New Zealand teams that made us so smitten with them, and a fourth element that in the contest for my heart and mind edged the cricket in front.

Peter Burling really is the original Cool Hand Luke, the wonderfully laid-back kid next door, if the kid next door by the age of 30 had grown into possibly the best sailor the yachting world has ever seen.

Richie McCaw, over a stunning 15-year test career established himself as the greatest All Black of all time. Adding to his popularity is the fact that the humble face he showed the world isn’t some media consultant’s construct. In the 2016 movie Chasing Great the most revealing moment by miles comes in some home video footage from 2001 when the then 20-year-old McCaw is embarrassed enough to pull his jersey up over his face, as he and his family watch him being named on television in his first All Black side.

Cricket’s Brendon McCullum is different again, a kid from South Dunedin, where money may be tight, but some cheeky adventure is always just around the corner. By the time of the 2015 World Cup we were all aware that he’d changed the face of the Black Caps for the good. From a famous meeting at the Melbourne Cricket Ground where they bravely conceded, as one Black Cap told me a few years later, “that we were seen as bunch of dicks”, McCullum and his men fought their way into our affections by stopping sledging, chasing everything in the field, and, with McCullum setting the example, never being cowed by a big-name bowling attack.

The second point the teams had in common, is that we always love the concept of our guys beating the world.

No need to be embarrassed by the idea. In the America’s Cup we are actually taking on not only the best teams, but also the best technology, overseas billionaires’ money can buy. All Black teams going to Britain and mostly winning since 1905 is a big driver of our love of rugby. And anytime we beat Australia at cricket feels like a magic day.

Third, when it’s nail-bitingly close, how sweet it is when we’re the side that wins.

On the Waitemata over the last week it was impossible to stay completely composed, even when we had a good lead, because the ghost of San Francisco, when Jimmy Spithill won after being 8-1 down, kept creaking past a cupboard door into our paranoid minds. Blair Tuke was probably not completely joking when he said he was only confident the Cup would be retained “when we crossed the finish line.”

The rugby final in 2011 against France was the most nerve-wracking, and when the final whistle went, and in coach Graham Henry’s words, “we thrashed them by one point”, the relief was so great it felt as if the whole country could stop holding its breath.

Remember the Cricket World Cup semifinal at Eden Park? Five runs needed for the Black Caps to win. Just two balls left in the over, and Elliott hits Dale Steyn for six off the first. Then, in a gesture that became an iconic image all over the world, Elliott went to Steyn, who had flopped on the ground in despair, and offered him a hand to get to his feet.

So now we get to element No 4, the reason the cricket edges ahead in a champion field.

The Black Caps were rank underdogs in 2015. By comparison, Team New Zealand were at odds so short that during the final series even Brad Butterworth, an advisor to Luna Rossa, said on Newstalk ZB the New Zealand boat would probably win. “They’re clearly the favourites.”The All Blacks were such red-hot favourites in 2011 that Ireland’s biggest betting agency paid out on an All Black victory in the final six days before the game was even played.

Yes, when the Black Caps crossed the ditch for the 2015 final in Melbourne they were well beaten by Australia, but how magnificent those days in New Zealand in March were, as they whipped the Aussies at Eden Park in group play, did the same to the West Indies in Wellington in the quarter-final, and took the last gasp semifinal victory over South Africa.

It was The Karate Kid taking on the biggest bully in real life, and winning. Rocky dragging himself off the canvas to deck Apollo Creed. Who doesn’t love a happy underdog story?Kiwis certainly did. How much? The live coverage of the cricket final in Melbourne attracted 1.96 million viewers. Only the 2011 Rugby World Cup has had a bigger television audience here, with 2.04 million people watching.

Cricket’s golden spring of 2015 deserves to be remembered as a glorious high-water mark in a glittering field of international sport in our backyard.