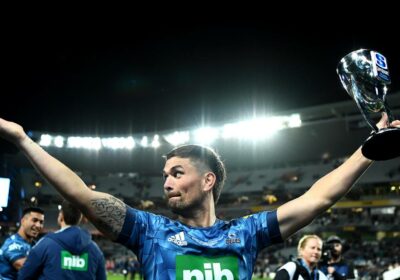 LET’S HEAR IT FOR THE BOYS

The Super Transtasman final had the potential to end in heartbreak for the most long suffering fans in New Zealand rugby.

The fact the Blues, down by two points with just 13 minutes to play at Eden Park, held their nerve to win 23-15 was a tribute to leadership, on the field and in the coaching box.

Captain Patrick Tuipulotu has become an inspirational figure with defence, in particular. As a head on tackler he has the same juddering effect on a runner as plunging face on into the concrete divider on the southern motorway.

Head coach Leon McDonald and his staff deserve equal praise for instilling belief into the eternal chokers of the game. No heads dropped when the Blues fell behind, and in fact the most dynamic of the two tries they scored was the second, just four minutes from the end.

A brilliant 20 metres run by Hoskins Sotutu allowed a speedy feed by Jonathan Ruru forBlake Gibson to dive across for the try. But what would have put a smile on any coach’s face was that the whole passage started with a turnover at a breakdown, proof that the Blues are now an 80 minute team, which champions need to be.

LET’S HEAR IT FOR THE SOUTHERN BOYS, TOO

On paper the final looked a mismatch. The Blues started with five All Blacks in their pack, and an All Black prop on the bench. The Highlanders had one All Black forward, 36-year-old Bryan Evans, who played two tests 12 years ago.

But what they lacked in international recognition the Highlanders, as they did when they stunned the Crusaders 33-12 in Christchurch in April, played with a fearlessness that having nothing to lose can engender.

Their courage, backed up by the sheer brilliance of Aaron Smith, and the big match temperament of Mitch Hunt at first-five, kept the Eden Park match in the balance almost to the end.

The Highlanders went into the lead in the second half on the back of a 45 metre penalty goal by Josh Ioane. The pressure on him came not only from it being a vital moment in the game, but also from a surprising amount of booing from the big crowd. I loathe kickers being booed and have enjoyed the fact you rarely heard it in Auckland during the last decade. In hindsight that may not have been so much good sportsmanship, more a case of lethargy.

Just as crucial was the wide angled kick at goal that Harry Plummer nailed to get the Blues back in front 16-15. Plummer has shown his backbone many times as a tackler, but kicking for goal when a game is in the balance is another huge test of bravery, and Plummer, not long off the bench, was unerring.

FOR ONCE NO QUESTION ABOUT CARDS

Super Rugby in 2021 has been plagued by calls over foul play and cards.

There was just one card in the final, when Ash Dixon rose too high tackling Otere Black, and his shoulder slammed into Black’s jaw.

“There was no malice,” Dixon quite rightly told referee Mike Fraser, echoing the conversation Fraser had just had with his officials. Given the standards that must be enforced to keep as many high shots out of the game as possible, a card was inevitable. Fraser was entirely correct to limit the call on Dixon to yellow.

At first blush the moment in the 30th minute when Mitch Hunt when tumbling to the ground after a collision in the air with Blues wing Bryce Heem looked like a red card would be a certainty.

But thanks to exhaustive replays it emerged that Heem had stumbled off balance after bumping into Highlanders wing Jona Nareki. Referee Fraser explained to Tuipulotu and Aaron Smith, “(Heem) was a little bit careless, but he has tripped because of his contact with (Nareki) so we’re bringing it down from a yellow to a penalty.” Only someone blinded by parochialism could have disagreed with the decision.

SO WHERE TO FROM HERE FOR THE BLUES?

Optimism about the future of the Blues has too often been a path straight to disappointment but as bizarre as the Transtasman competition was, the Blues have surely turned the corner that has frustrated fans, and crushed coaches for far too long.

If the gains on the field can be matched by unity and commonsense off it, both elements lacking in the plague years, then a team based on a city with the biggest talent pool in the country should be able to again be a major force in Super rugby.

No rivalry has the potential to spark more interest than the one between the Blues and the Crusaders. In 2022 the halcyon days of titanic battles between north and south should be back in our rugby mix.