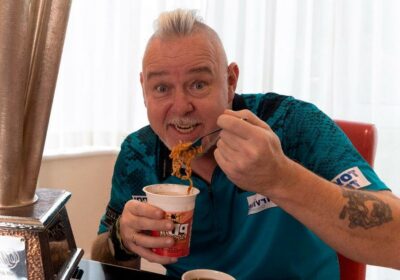 World darts champion Peter 'Snakebite' Wright has revealed the secret in his luggage which keeps him firing on all cylinders: Bombay Bad Boy pot noodles.

Wright has endured patchy form in this year's Cazoo Premier League, partly due to health problems with his gallstones and his incurable inclination to switch darts in search of the perfect arrows.

But the 52-year-old Scot has been consistent in at least one aspect of his routine – his, er, simple diet. Wright, who faces fit-again James Wade at London's O2 Arena on Thursday, revealed: "I’ve always got Pot Noodles in the luggage ready to go.

"When you finish playing darts at the end of a tournament and get back to the hotel, the room service is either nothing or a big pizza. It’s something to eat after a long day. I like the Bombay Bad Boy or just the chicken one.

"I thought I’d do a lot better in the Premier League this year. There’s been some good averages and some awful ones. But if you look at it, I’ve had more good ones. It’s not bad but not consistent enough."

Wade, well-placed to qualify for next month's play-off finals in Berlin, missed last week's Premier League date in Sheffield after being detained for three nights in a German hospital.

HAVE YOUR SAY! What's the best pot noodle flavour? Let us know in the comments section.

The 'Machine' was taken ill at the European Open in Leverkusen, complaining of palpitations, dizziness and nausea, and doctors advised the world No.5 to rest.

But Wade returns to the oche hoping to build on his most consistent spell of form for a decade, including a World Championship semi-final at Alexandra Palace in January and two Premier League mini-tournament wins.