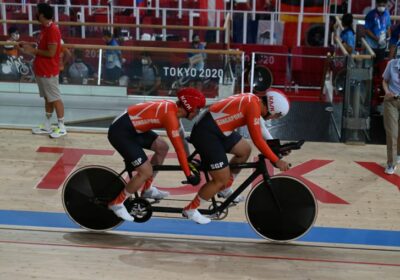 SINGAPORE – Tandem cyclist Steve Tee continued his fine form in his debut Paralympics with another personal best in the men’s B 1,000m time trial on Saturday (Aug 28).

Tee and pilot Ang Kee Meng clocked 1min 10.886sec at the Izu Velodrome, bettering their previous time of 1:14.121 achieved at the 2019 Para Asian Track Championships in Jakarta. They finished eighth out of 10 pairs overall.

Briton Neil Fachie and pilot Matthew Rotherham claimed the gold medal in a world record 58.038sec while compatriots James Ball and Lewis Stewart took the silver in 59.503sec. France’s Raphael Beaugillet and Francois Pervis settled for the bronze in 1:00.472.

In tandem para-cycling, a visually-impaired athlete, called the stoker, is paired with a sighted counterpart, or the pilot.

This is the second PB Tee, 40, and Ang, 34, have set in Tokyo after improving on their time in the men’s B 4,000m individual pursuit, in which they finished ninth of 14.

The duo return to action in the men’s B time trial (road cycling) on Tuesday.