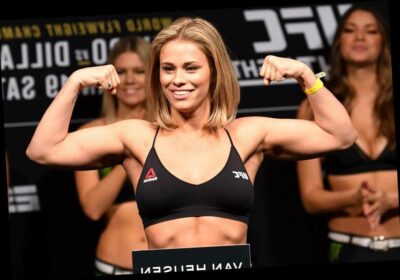 Paige VanZant ready to cash in on her Instagram fame

Paige VanZant kicks off the new year in a cheeky swimsuit

Of all the destinations fight fans expected for Paige VanZant — when one of the most recognizable athletes on the UFC roster hit free agency last summer — Bare Knuckle FC wasn’t really on the radar.

That’s forgivable. It wasn’t exactly on her’s either.

“No, not at all,” VanZant told The Post over the phone on Tuesday. “I always thought of [bare knuckle boxing] as something I would want to do, but I didn’t know that it would be my home. I didn’t know that they would be such a big player in the negotiation process, and they ended up being one of the biggest players.”

And yet, the nine-fight UFC veteran with an 8-5 mark in MMA will step into the ring for Friday night’s BKFC pay-per-view headliner (FITE TV, 9 PM) sans gloves, squaring off against Britain Hart in Tampa, Fla., in an event dubbed KnuckleMania.

That she left the UFC, the top MMA promotion, wasn’t necessarily a shock. Many predicted VanZant, whose name carries weight with casual and non-fighting fans thanks to her success on reality competition shows “Dancing With the Stars” and “Chopped,” to join husband Austin Vanderford under the Bellator banner. Noting that she respects the offer she received from one of the top two MMA outfits after the UFC and other would-be suitors, it’s unlikely to have been competitive with what BKFC brought to the table.

With new management negotiating this deal than had previously bargained with the UFC, VanZant secured what manager Malki Kawa referred to last August as “a multi-million dollar deal and we’re not even talking the sprinkles and the cherries that go on top of the sundae.”

“On top of their amazing offer, it was just where my passion was,” VanZant said. “I thought of how exciting it would be to call myself a professional bare knuckle boxer. It’s the one where I felt like this was gonna make me stand out, and this is what’s gonna make me the most badass, being in this organization.”

Few athletes in combat sports — especially in MMA — are able to lock up seven-figure contracts. But VanZant’s status as a crossover star makes her a bit of a unicorn in this world. Whereas most fighters could only dream of such a massive fight purse, it’s the 26-year-old’s reality that she can earn big bucks outside fighting as well.

Asked if she could have possibly turned down such a lucrative offer, she agreed she could have, based on the confidence in her ability to make the most of opportunities. She cited a separate million-dollar deal her manager secured for her earlier in the year, proof of the strength her name carries at the negotiating table.

“I’m fortunate enough that I have earned every dollar I’m being paid. I’ve fought for it,” VanZant said. “I’ve done everything possible to build my brand, and I know I’m bringing to Bare Knuckle a lot, as well as them bringing me a lot for what I’m bringing.”

VanZant wants to be clear that she’s not “pointing fingers and talking negatively about the UFC” over displeasure with her last contract. Rather, she says it took hitting the open market to gauge her value and find what she deemed appropriate compensation, something she says her previous management who negotiated on her behalf failed to do.

“It was a contract that was negotiated for me,” she said. “I wasn’t happy with it at the time, and now I’ve got one that’s better.”

Friday’s debut marks the first of four contracted bouts with BKFC. Unlike her experience in MMA, only her bare fists are weapons. That means no elbows, kicks or knees, which VanZant says she will miss utilizing, to some degree — particularly strikes from Muay Thai, for which she “gained a passion over the last few years.” No grappling either, which removes her strengths in creating scrambles and working for submissions and ground strikes on the mat. On the plus side, there’s no threat of the takedown, which she admits was part of her struggle in several UFC setbacks.

“Just my takedown defense was my biggest downfall,” VanZant said. “… It came to the point where a lot of my opponents were able to just take me down at will, and I wasn’t really able to make the progression in my wrestling to take over.”

She did, however, express confidence in the coaching staff at American Top Team, where she currently trains, as capable of taking her defensive wrestling to the next level if she finds herself in MMA competition again. And that option, she says, is afforded to her by her BKFC contract, so the door has not been closed on the sport.

With fighting Hart her primary focus, she has not been training MMA beyond assisting other women at the gym. Instead, she sharpens her boxing technique to “close the gap in my striking for this transition.”

One thing VanZant isn’t concerned about is the lack of gloves. She’s no stranger to being punched or cut open on the face. She also downplayed the difference between MMA gloves and no gloves at all, even less of a factor in this smaller, featherweight bout.

“My MMA gloves that I fight in for the UFC are tiny,” VanZant said. “I think the risk of getting cut open is a lot higher, but I think you can cope with anything.”

Hart is 4-4-3 as a boxer, as well as 1-2 in bare knuckle bouts — with a total of four knockout victories across both sports. VanZant spoke highly of Hart’s toughness as something that “carried her through a lot of fights.”

Although VanZant’s striking game in MMA wasn’t known for its boxing base, she believes viewers will be surprised with how far she’s come in the sweet science.

“I think that they’re gonna see a technical boxer out there, somebody who’s really developed my striking game,” VanZant said. “I’ve changed a lot of my fight style. I’ve been able to really focus on one skill, and when you focus on one skill for that long, it definitely will show the growth that I made.”