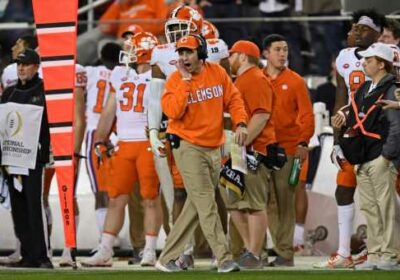 Rare is the stretch-run result that exists in a vacuum.

Scores from across the country will serve to strengthen or weaken the resumes of the Pac-12’s three playoff contenders (Oregon, UCLA and USC).

The conference needs as many zero- and one-loss teams to lose as possible, thus eliminating competition for its 12-1 champion — if one emerges.

This weekend, Pac-12 fans should be rooting for (CFP rankings used):

— No. 3 Georgia to beat No. 1 Tennessee, preferably by a large margin. Any one-loss SEC team would be compared to Oregon. If that team has a better comparable score — or beat the Bulldogs outright — the Ducks’ resume looks worse due to their 49-3 loss to the defending champs.

— Michigan State to beat No. 16 Illinois. Anything that bolsters MSU’s resume enhances Washington’s victory over the Spartans. That, in turn, would strengthen the profile of any Pac-12 playoff contender with a win over the Huskies. UCLA has one, and Oregon gets its chance next week.

— Brigham Young to beat Boise State. The Cougars (4-4) have stumbled since their Week Three loss to Oregon. If they finish with a winning record, that would help the Ducks.

— Notre Dame to beat No. 4 Clemson. This result would help USC’s case in the event the Trojans beat Notre Dame in the regular-season finale. It would also hand the Tigers their first loss. An undefeated ACC champion would gobble one of the semifinal berths.

— Texas Tech to beat No. 7 TCU. The Horned Frogs are undefeated and, like Clemson, pose a serious threat to any one-loss Pac-12 champion.

The Pac-12 leads all conferences with six bowl-eligible teams but will remain stuck on that number for at least another week.

Washington State (4-4) is the closest to qualification but still needs two victories to clear the bar.

Arizona, Arizona State, Cal and Stanford have difficult roads, with each needing to win three of their final four games.

At least two situations have been resolved.

— Ben Gulbranson will start for Oregon State on Friday night in Seattle; he’s 3-0 since replacing the injured Chance Nolan.

— Trenton Bourguet will start for ASU against UCLA after throwing for 435 yards in the victory over Colorado.

— Meanwhile, Cam Rising is expected to start for Utah, although that had not been confirmed by coach Kyle Whittingham as of Thursday morning.

Rising was a late scratch last week at Washington State due to lingering injuries from the USC slugfest.

— Finally, J.T. Shrout is expected to start once again for Colorado as freshman Owen McCown recovers from injuries sustained in the victory over Cal.

At this point, the Buffs might opt to preserve McCown’s redshirt and shut him down for the duration.

Arizona, which visits No. 12 Utah, is seeking its first road victory over a ranked opponent since the 2014 season, when the Wildcats beat … Utah.

UCLA tailback Zach Charbonnet is averaging 7.53 yards per carry. Within the Power Five, only Alabama’s Jalen Milroe is better (8.48).

In five home games, Washington has outscored its opponents by 110 points.

Oregon has allowed one sack in eight games.

Washington State has 59 tackles for loss. No other Pac-12 defense has more than 50.

There are five Pac-12 games scheduled for Nov. 12, but only one kickoff time has been announced: ASU visits Washington State at 12:30 p.m. on the Pac-12 Networks.

The remaining games have been placed on six-day holds by Fox and ESPN, meaning the start times will be released either Saturday night or Sunday morning:

We don’t know the selection order, but the broadcast windows for those games are the following:

More than likely, the Washington-Oregon game will land in one of the Fox slots, with UCLA-Arizona as the second pick if the Bruins win this weekend.

Nov. 12 will mark the second instance in 2022 of Fox showing a Pac-12 game on its over-the-air network in primetime on the West Coast.

The USC-Fresno State game in Week Three was on Big Fox at 7:30 p.m.

Support the Hotline: Receive three months of unlimited access for just 99 cents. Yep, that’s 99 cents for 90 days, with the option to cancel anytime. Details are here, and thanks for your support.