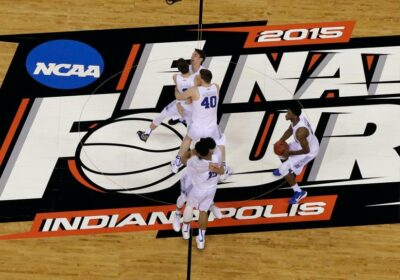 The NCAA Tournament selection committee on Saturday released its top 16 seeds at this stage of the season.

Not surprisingly, the Pac-12 was nowhere to be found. In basketball as in football, the conference is fairly stout in the middle but soft at the top.

The top-16 breakdown by league:

Plenty could change by Selection Sunday (March 14), but this much is true, always and forever: The seeds matter.

The difference between the No. 4 seed line and the No. 5 — or the six and the seven — might not seem all that significant, but every line impacts the likelihood for a deep run in the NCAAs.

And the Pac-12 is desperate for a deep run.

It has placed one team in the Final Four in the past decade (Oregon in 2017) and has sent just one team into the Sweet 16 in the past two tournaments (the Ducks in ’19).

At the very least, the conference needs to place a team in the Sweet 16 to remind the sport that it’s not the Big West.

The higher the seeds, the more likely that reality becomes.

Here are the all-time records in the first and second rounds for each seed line through No. 12 (power conference teams are rarely seeded below 12):

The evidence is clear and mountainous.

USC would stand a significantly better chance of escaping the first round and surviving the second from the No. 4 line, as opposed to the No. 5.

Colorado’s prospects for advancement would be brighter as a six than a seven.

As we head down the stretch with several Pac-12 teams seemingly destined for mid-level placements, be mindful of the history.

Every result could impact tournament seed, and every seed line matters.

To the power ratings …

Last week: 1
Results: won at Washington 69-54 and WSU 76-65
Next up: vs. ASU (Wednesday)
NET ranking: 15
Comment: No secret to the success: Trojans are No. 9 nationally in adjusted defensive efficiency — two spots better than even Virginia.

Last week: 2
Results: lost at WSU 81-73, won at Washington 64-61
Next up: vs. Arizona (Thursday)
NET ranking: 49
Comment: Johnny Juzang’s 32-point performance to beat UW reminded us of the time Toby Bailey scored 32 in Seattle, except the Bruins lost that game — and Bailey scored all 32 in the second half.

Last week: 4
Results: lost to Colorado 69-51, beat Utah 73-66
Next up: at Washington (Thursday)
NET ranking: 60
Comment: No team’s fate is more closely tied to Arizona’s performance than the bubble-sitting Cardinal, which desperately needs a strong finish by the Wildcats in order for those two wins to positively impact its resume.

Last week: 6
Results: won at Cal 76-75, lost at Stanford 73-66
Next up: at Oregon State (Thursday)
NET ranking: 84
Comment: Some USC football fans have mixed feelings about success, because it further entrenches Clay Helton. We’re starting to wonder if that’s the case with Utah basketball fans and Larry Krystkowiak.

Last week: 7
Results: beat Oregon State 70-61, lost to Oregon 63-61
Next up: at UCLA (Thursday)
NET ranking: 47
Comment: The best thing we can say about the latest installment of the UCLA-Arizona rivalry is that it won’t be televised by the Pac-12 Networks. Thursday’s affair is on ESPN2.

Last week: 8
Results: lost at Arizona 70-61 and ASU 75-73
Next up: vs. Utah (Thursday)
NET ranking: 135
Comment: Any hope of an opening-round bye in the conference tournament evaporated in the desert. Beavers are too many games behind with too few weeks left.

Last week: 12
Results: lost to Utah 76-75, beat Colorado 71-62
Next up: at Washington State (Thursday)
NET ranking: 166
Comment: What we said above about WSU’s Isaac Bonton goes for Matt Bradley, as well: He’s averaging 22.3 points in his past six games.

Last week: 11
Results: lost to USC 69-54 and UCLA 64-61
Next up: at Washington State (today)
NET ranking: 202
Comment: For context, here are the five teams immediately above the Huskies in the NET rankings: The Citadel, NJIT (that’s New Jersey Institute of Technology), Wagner, South Alabama and Norfolk State. Inexcusable.

Support the Hotline: Several Hotline articles will remain free each month (as will the newsletter), but for access to all content, you’ll need to subscribe. I’ve secured a rate of $1 per week for a full year or just 99 cents for the first month, with the option to cancel anytime. Click here. And thanks for your loyalty.