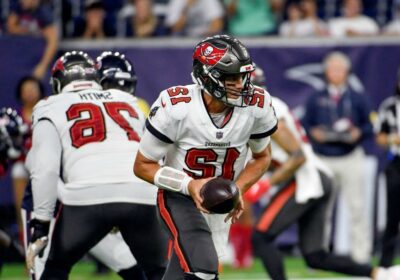 Tom Brady is yet again the star attraction as the NFL returns for another season on Thursday night.

The age-defying quarterback has his sights on a record eighth Super Bowl ring as reigning champions Tampa Bay Buccaneers open their latest campaign at home to the Dallas Cowboys.

Brady, 44, rolled back the years in 2020, his first year with the Buccaneers after two success-filled decades at the New England Patriots.

The veteran threw for 4,633 regular-season yards and 40 touchdowns and a further 1,061 and 10 in the play-offs as he led the Florida team to their first Super Bowl win since 2002.

He appears to be showing no sign of slowing down.

“All credit to him, his longevity, his achievements,” said London-born Osi Umenyiora a two-time Super Bowl winner with the New York Giants who now works as a pundit in the UK.

“It is something we haven’t seen before and, quite frankly, I don’t think we are ever going to see something like this again.

“He has shown he is the best quarterback we have seen, probably the best overall football player we have seen.”

Umenyiora believes Thursday’s clash, which precedes a full programme over the course of Sunday and Monday, is the perfect fixture to whet the appetite for the season ahead.

“It’s the best game to be kicking the season off with,” he said. “Obviously you’ve got the defending champions coming in and everyone wants to see what Brady and the Bucs are going to do.

“This Tampa Bay team brought everybody back,” he said. “This is the same squad and they need to be firing out of those cannons. If they start slow, that’s a problem. I am looking at them to start where they stopped last season.”

In one of the other standout games of the opening weekend, the Kansas City Chiefs, last year’s Super Bowl runners-up and champions of two seasons ago, host the Cleveland Browns.

“My sneaky team is Cleveland,” said Bell. “They are so balanced and that team is built for success.

“They have strength in their defensive line and their running backs, with a dominant offensive line.

“They can really make it hard for other teams in the AFC.”

Umenyiora feels there are plenty of other teams to watch out for this season, which has been expanded from 16 regular-season games to 17.

He said: “For AFC contenders, you have to look at the Buffalo Bills, then there’s the Chiefs.

“In the NFC, it’s not going to be a cakewalk for Tampa Bay. You also have to go with the Green Bay Packers, Los Angeles Rams and New Orleans Saints. Nobody is talking about the Seattle Seahawks, but what could they do?”