Trainer Ed O'Rourke expects to produce a few city winners in the new year as he defended his right to continue operating out of the much-envied Randwick.

Several larger rivals are desperate to operate more boxes at Sydney's headquarters, and it is not lost on them that O'Rourke's winners and starters have made it difficult to justify his residency. 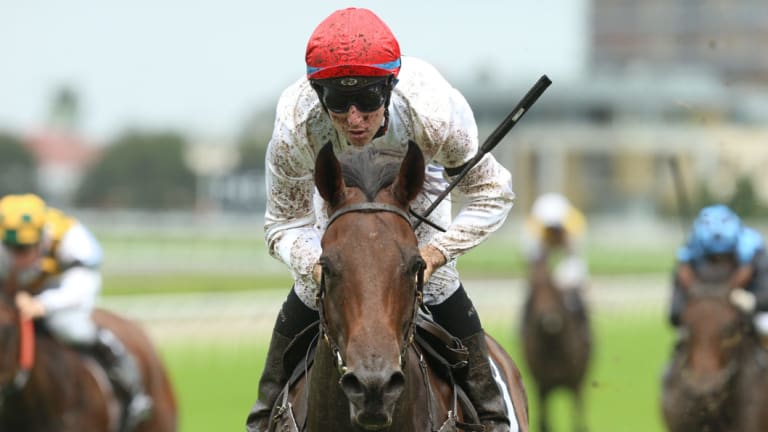 Class act: Talented mare Frolic is back in work for trainers Ed O’Rourke and Michael Freedman.Credit:bradleyphotos.com.au

O'Rourke himself said it was a fair question when asked by The Form if he felt pressure to perform in town or perish.

The Australian Turf Club introduced key performance indicators several years ago, which required trainers to produce a certain number of runners in town if they wanted to continue to run stables in the city.

O'Rourke, who has 24 horses in work with training partner Michael Freedman, said he had never fallen behind the required six runners he needed to start each month in town. There are several rivals at Warwick Farm who are doing it tougher and being monitored by the ATC.

O'Rourke and Freedman will start With Purpose who chases a fourth straight win in the TAB Rewards Handicap (1400m) at Rosehill.

With so many young horses, O'Rourke said his runners were always going to need time and were finally ready to be unleashed.

"We have a lot of very young horses, our KPIs are six runners a month, but with two-year-olds you can't run them for the sake of it,'' O'Rourke said.

"It's building blocks and no pressure on us. We'll run them when they're ready to go.

"It's all going the right way. Michael has bought some nice horses, which will be a massive help.

"In the new year you'll see a big change and some nice horses sitting there and coming through. We look forward to the new year with them.''

With Purpose has won three straight at Goulburn and is stepping up in class on Saturday at Rosehill.

The four-year-old mare will also be nominated for a $100,000 race at Wyong next Wednesday.

"We're stepping up in grade and coming to town on a Saturday, but she's done everything right so far, but it is a big ask,'' O'Rourke said.

"We've also given her the option of next Wednesday in a race for three and four-year-olds. At the moment we're still heading towards Saturday.

"Her wins have come at Goulburn but we feel she can come to town and represent herself well.

"Adam [Hyeronimus] was pleased with her work on Tuesday morning, and he was keen to get back on her, which is a good sign.''

O'Rourke has welcomed back into work Golden Slipper runner-up Frolic, while he was happy for punters to keep an eye out for Swiss, who raced on the worst part of the track at Kembla last weekend, but will be primed in nine days time at Hawkesbury.

O'Rourke was working for Freedman when he left for Hong Kong, but since his return the pair formed a partnership, a union O'Rourke said made plenty of sense given the industry never stopped.

The ATC pushed for city trainers to meet KPIs with their local starters in a bid to increase field sizes, a move which was initially met with resistance several years ago. Racing in general has seen the gap between the powerhouse stables and battlers gradually increase over time.