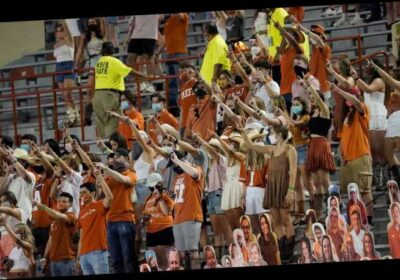 There's one magnificently stunning thing about the long awaited report from the University of Texas about the school song called "Eyes of Texas." It deals with a racist minstrel show.

If you want to understand what privilege looks like, what ignorance looks like, how a group of highly intelligent people can be totally blind to racism, this part in the executive summary of the report outlining the facts it uncovered is telling:

“These historical facts add complexity and richness to the story of a song that debuted in a racist setting," the report states, "exceedingly common for the time, but, as the preponderance of research showed, had no racist intent."

That "racist setting" was a minstrel show on May 12, 1903. In that show, the report states, it was "almost certainly" performed by whites in blackface. The authors write “we are pained and uncomfortable with this aspect of its history.”

What the report does is definitively prove the song's racist origins, but it also says those racist origins are irrelevant, when they are the core of the issue, and why so many find the song objectionable.

“The research leads us to surmise that intent of the ‘Eyes of Texas’ was not overtly racist,” the report says. “However, it is similarly clear that the cultural milieu that produced it was.”

In other words, they are blaming the culture that produced the song, but not the song itself, which is a twisty piece of gymnastic cognitive dissonance that Simone Biles would adore.

This is where the report completely invalidates itself and isn't worth the megabytes it's written on.

Saying that a song tied to a minstrel show with white people wearing blackface has no racist intent, is the report equivalent of "some of my best friends are Black."

If you cannot see that a minstrel show is racist, and the song's origins emanate from that, really nothing you say after that should be taken seriously.

The song, and the recent examination of it by University of Texas athletes following the killing of George Floyd, has become a national issue. That's because of the emergence of a post-Floyd world where athletes are taking firmer stands on social justice issues.

The report notes this saying that Floyd's death in May of 2020 caused "protests around the country and world” and led to Texas athletes examining the school's racial history, including the song.

The school did make changes including renaming some buildings and erecting a statue honoring the first Black football letterman.

But the song has stayed and the administration says it won't be going anywhere. Wealthy donors want it to stay, too, and some of them have expressed their Pleistocene-like views in letters to the school.

It's still embarrassing that a school administration puts so much effort into keeping the song, which is a relic, with its primordial origins cooked in the poisonous stew of white supremacy, minstrel shows and segregation.

Just change the damn thing. It's a song, not a beating heart. Changing it wouldn't be cancel culture, it'd be recognizing its foul history, and showing respect for the 21st century Black athlete who, by the way, is the main power source for two huge revenue generating sports.

Changing it is the easy solution. Far easier than writing a self-serving report.