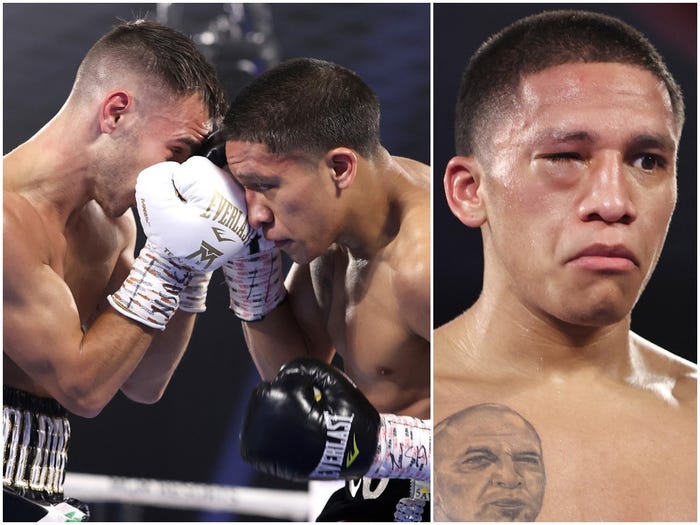 One of boxing's most powerful figures is livid his guy lost a fight because of a disputed head-butt.

Andrew Moloney, a super flyweight boxer from Australia, was challenging Joshua Franco after losing his championship to the American in their first fight earlier this year.

The rematch took place Saturday at the MGM Grand Conference Center in Las Vegas, a behind-closed-doors venue that the powerful promotional company Top Rank has as its residency while it navigates the coronavirus pandemic.

The Top Rank founder and CEO Bob Arum, a veteran promoter at 88, was angry at the fight's outcome after a no-contest was ruled when the referee, and a reviewing panel, thought a head-butt caused a fight-ending injury to Franco.

The injury appeared to be caused by legal punches, though — shots so good they caused a grotesque swelling around Franco's eye that it impaired his vision, and a physician said he couldn't continue.

The Nevada State Athletic Commission [NSAC] reviewed the apparent incident over 26-minutes but upheld the bizarre decision, which meant Franco retained his belt.

Arum told reporters after the fight that "there was no head-butt."

He said: "They [the NSAC] waited until the end of the fight, they're still allowed to look [at the incident, whether it was a punch or a head-butt], and they kept with it to protect the referee who didn't know what he was doing.

"People blame me because I'm the promoter but I've got nothing to do with the goddamn thing. I just want a fair adjudication. It's not even close."

When asked what he could do, Arum said simply: "Get the f— out of Vegas."

"I can't believe that they took this away from me. I've trained my arse off the last five months, been away from my family," Moloney said on the ESPN broadcast.

"That eye was closed by 50 jabs. That's why his eye's shut, not the headbutt. There was no headbutt," he said.

The NSAC executive director Bob Bennett told the combat sports correspondent Kevin Iole: "The original call was made by the referee Russell Mora. There was a head-butt in the first round.

"A subsequent review of instant replay revealed that there were two possibilities of a head-butt to the fighter's right eye. And, of course, you could see some jabs that just aggravated that made the eye worse.

"Our instant replay rules clearly state that unless there's clear and conclusive evidence that a foul did take place, unless we're 100% sure, the referee's ruling stands.

"In fairness to the referee, there were unequivocally two areas we saw that could be possible for the head-butt."

Douglass Fischer, the editor-in-chief of The Ring magazine, said on Twitter that it was a "dreadful call."

The Boxing Scene reporter and former ESPN writer Dan Rafael said footage showed the injury was caused by a punch, not a head-butt.

"Replay just showed a solid jab to the eye that caused swelling," he said.

It is as of yet unclear whether a third bout between the fighters is on the cards.