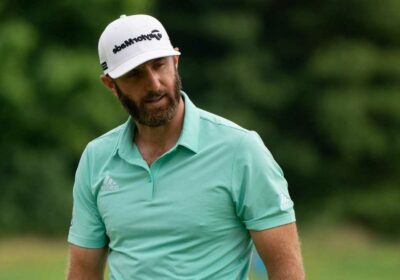 John Pak a cut above despite missing weekend at Travelers

Jon Rahm's anger management promise helping him in so many ways

Later this month, some of the world’s best golfers will be competing in the Olympics in Japan.

The key word is: some.

Unfortunately, the Olympic golf competition will not include several of the top players who qualified for the event, but have chosen not to make the trip.

This, sadly, is what separates golf in the Olympics from the other sports in the Games.

I’ve always been drawn to the Olympics for the romantic element that winning a gold medal is the ultimate achievement for athletes in their respective sports.

In the case of gymnast Simone Biles, swimmer Katie Ledecky, track and field star Noah Lyles and the hundreds of other athletes who’ll be competing in Tokyo, winning an Olympic gold medal is the pinnacle of their sport.

The golfers will tell you that a Masters green jacket, British Open Claret Jug or winning a U.S. Open or PGA Championship is more important than an Olympic gold medal.

Among the world’s top golfers who qualified to compete in these Olympic Games, but have chosen not to make the trip, are the United States’ Dustin Johnson, the No. 2 ranked player in the world, Australia’s Adam Scott, Spain’s Sergio Garcia, South Africa’s Louis Oosthuizen, Germany’s Martin Kaymer and England’s Lee Westwood, Tyrrell Hatton and Matthew Fitzpatrick.

This is not meant to denigrate these players for not wanting to make the trip, because each has his reason. The greater point is that the Olympic experience simply isn’t revered and treasured by the golfers the way it is by other athletes.

There are plenty of reasons for this, beginning with the fact that, until golf was reintroduced as an Olympic sport five years ago in Rio de Janeiro, it had been more than 112 years since the sport was a part of the Games. So, for the current generation of players, the Olympics have never been on their radar.

Golfers, too, are independent contractors, most of whom already happen to be quite wealthy and don’t need the Olympics to fatten their bank accounts or strengthen their brands.

Johnson, back in March, was the first of the top players to say he would opt out of playing the Olympics, citing the scheduling of the competition and travel issues as his reasons.

“It’s a lot of traveling at a time where it’s important for me to feel like I’m focused playing on the PGA Tour,” Johnson said.

Garcia, on a recent Twitter post, called skipping the Olympics “one of the most difficult decisions of my life,’’ adding, “I love the Olympic Games, and it is always an honor to represent Spain, however my number one sporting priority is in the Ryder Cup at this moment.’’

There you go: Add the Ryder Cup to the list of higher priorities for the golfers than the Olympics.

Perhaps the most damning — yet honest — answer about the Olympics came from Rory McIlroy five years ago in the lead-up to the 2016 Games, for which he (along with a number of other top golfers) opted out because of the Zika virus in Brazil.

When asked if he would watch the Olympics on television, McIlroy said, “I’ll probably watch the sports that matter, like swimming and track and field.”

That answer rubbed a lot of people the wrong way, but it was indicative of what most of the golfers feel about the Olympics: They don’t matter that much to them, not nearly as much as the major championships in their sport.

Maybe this will change with time, the longer golf remains an Olympic sport.

In 2016, when England’s Justin Rose won the gold medal, he called it one of the greatest experiences of his career. Rickie Fowler was so proud to be an Olympian, he got a tattoo of the Olympic rings on his arm.

Maybe one of the top-class players competing at these Olympics, such as Spain’s Jon Rahm, the reigning U.S. Open champion who’s ranked No. 1 in the world, McIlroy, Justin Thomas, Bryson DeChambeau, Collin Morikawa or Xander Schauffele, will experience the same special feelings Rose and Fowler did five years ago.

At the very least, it’s going to take time and more years with golf as an Olympic sport before winning a gold medal even rivals the prestige and perks of winning a major championship.