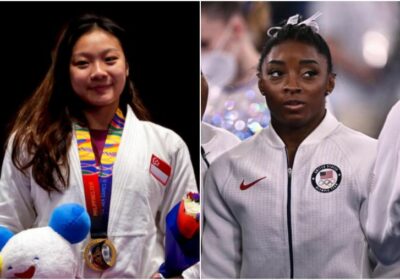 But the belt quickly became a heavy burden for the then 19-year-old, who felt that a lot more was expected of her.

Weighed down by the pressure, she performed poorly at her next competition a month later and injured herself, suffering a partially torn lateral collateral ligament.

Lien is not alone in dealing with such intense pressure. She and American gymnast Simone Biles are among a growing number of athletes who have spoken openly about their battles with mental health issues, which have become increasingly prevalent in recent years.

Lien, now 22, said: “I didn’t know how to handle the expectations and the thought of what people would now see me as, and that really affected me mentally.

“Every athlete has to go through this and it’s very common, so I think for me I didn’t do well in that competition and that’s when I realised mental health is so important.”

Biles, regarded as the greatest gymnast of all time even before the Tokyo Games, also put the issue firmly back in the spotlight when she withdrew from the gymnastics women’s team final, and individual all-around, vault and uneven bars finals to focus on her mental health.

On Friday (July 30), Biles, who had been expected to win six golds in Tokyo, wrote on Instagram: “I truly do feel like I have the weight of the world on my shoulders at times. I know I brush it off and make it seem like pressure doesn’t affect me but damn sometimes it’s hard.”

Former national athlete Eileen Chai, who also represented Singapore in gymnastics, athletics and diving cross four SEA Games in the 1980s to 1990s, is familiar with the pressures faced by elite athletes.

The 43-year-old said she placed a lot of pressure on herself to perform as her parents had made sacrifices for her to train and compete. “Seeing how my parents helped me, how my school principals helped me to take time off from school to go to China to train, I felt like I needed to deliver for them,” she said.

Athletes are often seen as paragons of physical and mental toughness so showing vulnerability may not come easily, but that is slowly changing, said psychologists and athletes whom The Sunday Times spoke to.

Lien, who has been vocal about her struggles with anxiety, depression and an eating disorder, said: “Having the label of an athlete doesn’t discount us from developing eating disorders and mental health illnesses and honestly that doesn’t make us mentally weak, at the end of the day we’re still human after all.”

Four-time Grand Slam winner Naomi Osaka recently withdrew from the French Open after admitting that she had suffered from bouts of depression and anxiety.

In 2019, former French footballer player Vincent Gouttebarge published a mental health study in the British Journal of Sports Medicine, which revealed that 34 per cent of active elite athletes and 26 per cent of retired elite athletes suffered from anxiety and depression.

Mental health issues have also been exacerbated by the Covid-19 pandemic, which has disrupted athletes’ training regimens and wreaked havoc on the international sports calendar, leading to the cancellation or postponement of many events, including the ongoing Olympics which was delayed by a year.

When sport came to a standstill last year, Lien, who had plans to build on a stellar 2019 that saw her win the World Championships and SEA Games, found herself at a loss as she was unable to train and competitions were cancelled.

She decided to take a break from the sport this year to focus on her mental well-being.

Clinical psychologist Caroline Balhetchet said: “A million eyeballs will always be watching and criticism will be rampant. Social media can be very cruel on just a normal person, let alone a celebrity athlete. People are not only looking at sportsmen as examples of success, but opportunities for criticism.

“We see ourselves in celebrities and want them to be better. Every step of the way, social media is commenting. It is easy to say that an athlete should avoid social media to preserve their mental health, but that is difficult to do in practice.”

Conversely, social media can also be a platform for athletes to speak out about their mental health issues, and chief sport and performance psychologist at SportPsych Consulting Edgar Tham believes it is important as it helps humanise athletes.

He said: “Many athletes are on social media, where people are more open about their thoughts and feelings, where they can ‘rant’.

“To me, this is good because it means that we can understand the athletes better and the challenges they face.”

Seeing high profile athletes speak out about their problems can also give others the courage to do so, added Tham.

In Singapore, some psychologists have also seen an increase in young athletes seeking professional help.

Dr Jay-Lee Nair, psychologist and practice owner of Mental Notes Singapore, observed that more parents have been setting up consultations for their children in the past five years. Calling it an “incredibly positive shift”, she said: “There are some wonderful movements on social media, there is a lot more positive noise around people speaking out about mental health and normalising going to see someone and viewing it in a positive way.

“I do believe that teenagers are talking more to their friends and are not keeping things in, but are expressing to each other and sharing a lot more, that they are going to see therapists.”

Lien’s mother Yuen Shuang Ching, a former national swimmer, was supportive of her daughter going for therapy. The 51-year-old said: “I was never afraid about what people might think, I only thought of her safety and whether she’s okay.

“When I heard about the situation that she’s not happy, that’s when I felt at least we can get help.”

Other high profile male athletes have also spoken up on the issue, which was once a taboo subject in sports.

American swimming great Michael Phelps has not shied away from talking about wrestling depression and suicidal thoughts, while National Basketball Association players DeMar DeRozan and Kevin Love have publicly spoken about living with anxiety and depression.

Mardy Fish, a tennis Olympic silver medallist who opened up about his struggles with anxiety disorder, said: “Mental health is not a very easy thing to talk about in sports. It’s not perceived as very masculine. We’re so trained to be ‘mentally tough,’ in sports. To show weakness, we’re told, in so many words, is to deserve shame.”

Mental health should not be trivialised

Although there was an outpouring of support for Biles, her withdrawal also drew criticism, with some like American radio host Ben Maller calling her “the biggest quitter in sport”.

But Chai believes Biles made the right choice to pull out of her events, especially after the latter revealed that she had been “having a little bit of the twisties”.

The twisties are the gymnasts’ term for a mental block that causes them to lose their sense of space and dimension midair.

This was particularly dangerous for Biles, who is renowned for performing extremely difficult moves.

Biles’ stumble in the vault during the women’s team final was a sign that she should not be competing, said Chai.

She said: “By having Simone say she wasn’t going to do it is good for the sport because it tells people when you see the signs that you aren’t able to do something for a high level competition, we should take a step back, there’s no point in trying to harm ourselves.”

Why then are mental health problems perceived as less severe than physical injuries?

Dr Nair explained this is because physical injuries are more visible as compared to mental health problems.

She added: “We can’t see sometimes what is going through an athlete’s mind and in their spirit and emotions because that can be masked and hidden and that’s why there is no validation sometimes.

“That’s why it is so important for athletes to express what they go through – their experiences mentally and emotionally.”

With athletes like Osaka and Biles bringing the issue into the spotlight, Lien believes it could signal a new era for sport, saying: “It’s a huge statement and when Naomi and Simone are doing these kinds of things, they’re changing the dynamics of how the sporting world functions and it’s a vehicle for better change.”