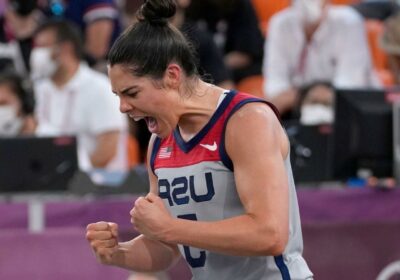 Are you not entertained? The Tokyo Olympics roll on Wednesday with opportunities for redemption and, of course, more gold medals. After a jam-packed Tuesday night that saw swimmer Katie Ledecky win her first gold of the Games — and her sixth career gold (GOAT things) — and U.S. men’s basketball bounce back in a big way with a 54-point win over Iran; it’s time to lock in on Wednesday morning’s slate of events.

From Team USA women’s 3×3 basketball earning a historic gold medal to Simone Biles and MyKayla Skinner showing out for the U.S. men’s gymnastics individual all-around final, we’ve got you covered with all the action going down in Tokyo:

The first-ever Olympic women’s 3×3 basketball gold-medal team is here, to be exact. The U.S. squad of Stefanie Dolson, Allisha Gray, Kelsey Plum and Jackie Young got it done, beating the Russian Olympic Committee squad 18-15 for the title. Plum secured the team’s lead with five points early.

The Las Vegas Aces star, whose Tokyo triumph comes after rehabbing from a torn Achilles tendon last summer, led all scorers in this tournament. She finished with 55 points over the course of the five-day event in which Team USA played nine games and lost only one.

Former Olympian and current Team USA women’s basketball coach Dawn Staley was also quick to send her congrats to the squad, and Coach Lawson, for the historic win.

Could there be a dynasty brewing? That was a rhetorical question.

Team USA’s women’s 3×3 hoops team came to win. The squad — Gray, Plum, Dolson and Young — has been dominant throughout its Tokyo run. The foursome heads into this morning’s gold-medal game against the ROC as the lone team with just a single loss.

The team also is bringing some serious support from back home to the championship contest, courtesy of Gray’s Dallas Wings:

As for Plum? She’s just having fun. Pretty impressive for someone who had surgery for a torn Achilles tendon last summer.

Make that 13 gold medals and counting for Japan. Daiki Hashimoto claims the men’s gymnastics all-around crown after a nail-biter of a final Wednesday — we’re talking a 0.400 difference between gold and silver. The 19-year-old narrowly edged China’s 2017 world all-around champion, Xiao Ruoteng, with a total score of 88.465 compared with Ruoteng’s 88.065.

It was Japan’s third consecutive Olympic men’s gymnastics all-around title, with Kohei Uchimura having won gold in London 2012 and Rio 2016 (Uchimura opted not to defend his title in Tokyo).

Mikulak and Malone have some famous fans

Malone and Mikulak finished in 10th and 12th place, respectively.

Some fast times in the pool

Start Wednesday’s action with some blazing times in the women’s 200-meter breaststroke.

The U.S. men’s basketball team rebounded from Sunday’s stunning loss to France by blowing out Iran 120-66 on Wednesday.

Damian Lillard scored 16 of his game-high 21 points in the first half, while Kevin Durant moved within five points of tying Carmelo Anthony’s all-time USA Olympic scoring record by registering 10 points to go along with five rebounds and five assists.

After squandering a double-digit second-half lead in an 83-76 loss to France on Sunday, the Americans started strong, ending the first quarter on a 23-5 run and leading 60-30 at halftime.

Devin Booker scored 16 points, Jayson Tatum added 14 and Zach LaVine tallied 13 for the U.S., which next plays the Czech Republic on Saturday at 7 a.m. ET. The U.S. shot lights out from deep, hitting 19-of-36 3-pointers in the victory. Lillard led the charge, becoming the fourth American to hit seven 3s in an Olympic game. — Matt Eisenberg

Biles pulls out of all-around

Simone Biles has withdrawn from Thursday’s all-around competition. According to a statement from USA Gymnastics, the decision was made after a medical evaluation.

Biles was scratched from Tuesday’s team final after vault, her first event of the night. She cited her mental health as the reason when speaking to the media after the meet.

Biles was the defending champion in the event and had been the overwhelming favorite to repeat. But her status was left in doubt after Tuesday’s outing, and she told the media she wasn’t sure if she would be able to compete Thursday. — D’Arcy Maine

Ledecky won the first gold medal of this Olympics campaign Wednesday in the debut of the women’s 1,500-meter freestyle.

Approximately 70 minutes after competing in the women’s 200-meter freestyle race, in which she finished in fifth place, Ledecky showed no signs of fatigue and took control of the 1,500-meter race from the start. She cruised to victory with a time of 15:37.34, more than four seconds ahead of silver medalist Erica Sullivan, also of the United States.

Ledecky’s American teammates chanted, “U-S-A, U-S-A,” from the stands at the Tokyo Aquatic Center as she approached the wall to clinch the victory.

Ledecky has been touted as one of the faces of the Games, and expectations are high for the 24-year-old to add to her collection of five gold medals. She won the silver medal in the 400-meter freestyle earlier in the week. — D’Arcy Maine

That’s one way to motivate

German judoka Martyna Trajdos found an intense way to get into the zone before her 63-kilogram match with Hungary’s Szofi Ozbas. The motivation went viral, but it wasn’t enough for Trajdos to win her round of 32 match.

German judoka coach Claudio Pusa has since been given an “serious official warning” after this footage made the rounds on social media.

“The IJF addressed a serious official warning towards the German coach, concerning the bad behaviour he showed during the competition,” the IJF said in a statement. “Judo is an educational sport and as such cannot tolerate such behaviour, which goes against the judo moral code.”

The United States men’s volleyball team defeated Tunisia in four sets, moving the Americans to 2-1 in Pool B. They dropped the second set before holding off their opponents. The U.S. will resume pool play on Thursday with a match against Brazil.

Having one Olympian is a big deal for a university. Two is even bigger. Two in the same event, both who ended up on the same medal podium? Welcome to the University of Virginia’s world.

This race caps a big year for Walsh and Douglass, who helped lead Virginia to the NCAA championship earlier this year.

In the first of her two swimming events on Wednesday at the Tokyo Aquatics Center, Katie Ledecky finished in fifth place during the women’s 200 meter freestyle. She was the reigning Olympic champion in the event.

Ariarne Titmus of Australia won the gold medal with a time of 1:53.50, a new Olympic record. Siobhan Bernadette Haughey of Hong Kong and Penny Oleksiak of Canada took home the silver and bronze, respectively. Ledecky’s time of 1:55.21 was more than a second-and-a-half behind the winning mark.

Ledecky got her sixth career gold in the inaugural Olympic running of the women’s 1500 meter freestyle later on Wednesday. She won the silver medal in the 400 meter freestyle earlier in the week — also losing to Titmus. — D’Arcy Maine

Titmus’ coach, Dean Boxall, was slightly excited for his swimmer.

Chiles getting after it

Jordan Chiles was put on the spot on Tuesday when Simone Biles withdrew from the women’s team all-around gymnastics competition. While the Americans weren’t able to catch the Russian Olympic Committee for the gold, Chiles performed well and showed some killer dance moves, to boot.

The dancing continued on the podium.

Lydia Jacoby’s gold medal in the 100-meter breaststroke was a surprise, so it’s time to get to know the young Alaskan swimmer. She provides some notes below.